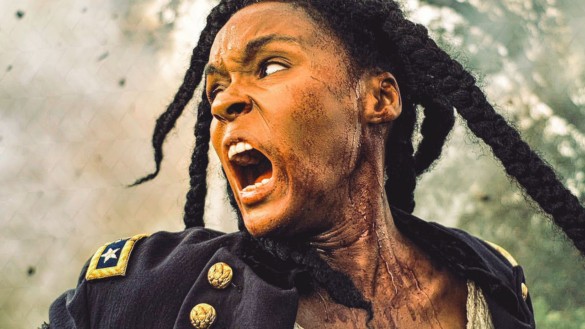 Synopsis: Successful author Veronica Henley finds herself trapped in a horrifying reality that forces her to confront the past, present and future — before it’s too late.

A few weeks ago, a video from a 2013 writers roundtable got a bit of traction on Twitter. The clip consists of legendary filmmaker Michael Haneke addressing the idea of making a film about Hitler. “It’s impossible for me to do that because of the idea of creating entertainment of this,” he says. He specifically calls out Steven Spielberg’s acclaimed Holocaust film, Schindler’s List, saying, “The mere idea of trying to draw and create suspense out of the question of whether out of the showerhead, gas is going to come or water – that, to me, is unspeakable.” There are certainly counterpoints to this argument regarding the value of exposing viewers to and educating audiences on history’s atrocities in an engaging way, but Antebellum could be Haneke’s most potent ammunition in his argument that humanity’s historical evils should not be put on film, especially in this way.

Not only does Antebellum employ Hollywood trappings, but it puts slavery in the context of a genre film. It has less in common with Schindler’s List than it does with Sam Raimi’s The Evil Dead or even 2019’s Ready Or Not. When you have a film about the greatest atrocity in American history, giving it the sensibilities of a “final girl” story is inherently offensive. It is clear that directors Gerard Bush and Christopher Renz had good intentions, but their methods resulted in a movie that often feels downright gross in its B-movie manipulation of real-life evil.

In addition, when it does dip its toe into the social commentary pool, it has nothing new or substantive to offer. It fails horribly in the “show, don’t tell” category, as the Janelle Monáe’s protagonist, a social advocate, and author, sermonizes the film’s message at a TED Talk-esque conference. The crowd erupts into applause, the film patting itself on the back for doing its part to teach the audience things it already knows. The idea that the stain of slavery remains present in the sociopolitical construction of modern America, while potent, is far from a revolutionary one. The film says nothing that hasn’t been said before, and it’s often talked about with far more insight than this film has to offer. Antebellum keeps see-sawing between preachy, trite dialogue scenes and what can accurately be described as “slavery schlock”, two words that should never be able to sit next to each other.

Without giving too much away, the film cuts between the stories of a young slave in the Antebellum South and a successful author in the modern-day, both portrayed by Monáe. Antebellum always has a sense of eeriness to it that goes beyond the terror of racism. The fantastical directions the story goes should not be spoiled for those who want to seek it out, but it prioritizes disorientation and surprise. This is, again, an inappropriate and ill-conceived prioritization, but, hey, at least it’s consistent with the rest of the film’s failures.

It is unfortunate that the film is fundamentally broken thanks to its core concept because there is some impressive (albeit superficial) craft on display. The film opens with an accomplished long take. Sadly, it feels like Michael Myers stalking his prey as Confederate soldiers ride by, and slaves hang laundry. The score by Nate Wonder and Roman Gianarthur is compelling, in a vacuum, but is as out of place as everything else in this film. Janelle Monáe, as always, has great presence and tries her best to grab hold of the film’s tone, but her efforts are undermined by almost every other character and performance in the film. Most notable is Jena Malone as a character named Elizabeth, a well-off racist with bad intentions. Malone channels her inner Colonel Sanders with the subtlety of a grease fire, submarining the film at every turn. Elizabeth’s role ramps up as the film goes on, but her performance never finds any sort of rhythm. Elizabeth’s husband, played by Jack Huston, has the same problem. Almost every character outside of Monáe’s is terrible on the page and hilariously one-dimensional on the screen.

Antebellum is very clearly a product of the Get Out phenomenon, but it completely whiffs on what made that film a cultural landmark. Peele did not literalize the horrors of American racism. The levity and genre exaggerations of that film only make it more terrifying. The film emphasizes character and has a degree of nuance that Antebellum can’t even sniff. When a film has great success, there is always a flood of imitators, but there may not be any creators in this sphere as special as Jordan Peele. Very rarely do films on race present new perspectives or have a unique angle. In that way, Antebellum is very normal. Its abnormality comes from its troubling, problematic approach. Add in one of the least-interesting, stale, and on-the-nose plot twists in recent memory, and the result is near-disastrous. It is entirely possible that Gerard Bush and Christopher Renz have a solid horror movie in them. Still, their impulses are a terrible match for a film addressing serious social ills. With a base as flimsy as this film’s, even the accomplished trimmings will collapse under the weight of its ambition.