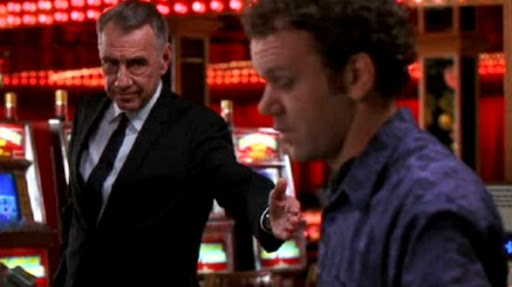 Sometimes, things just line up. The point of this column (for me) is to finally watch those movies from Criterion that I’ve been meaning to get to for years. The subject of this particular version of the column is the perfect example of that. Finally, I will be able to watch the first feature of one of my favorite working directors. But first, let’s talk about first features. It can be a bit difficult to view these in anywhere near an objective way. When a director goes on to greatness, there are essentially two options. On one hand, the first film could be truly great, but on the other hand, maybe we just want it to be so we can say things like “Yeah, I can really see the seeds of what he or she would do almost immediately after this.” And sometimes, it can honestly be difficult to tease these two things apart. For every great feature like Sex, Lies, and Videotape from Soderbergh, there is an Alien 3 from David Fincher. With that in mind, I watched Hard Eight from Paul Thomas Anderson.

In short, Hard Eight, based on PTA’s short film, Cigarettes & Coffee, tells the story of Sydney (Phillip Baker Hall) an older gambler, meeting and connecting with John (John C. Reilly). Looking at the careers of the actors in this film now, it certainly seems star-studded. After all, when your film has Samuel L. Jackson and Gwyneth Paltrow in secondary roles, this definitely stands out. Additionally, if you watch this out of order (as I did), Hard Eight is minor PTA. To be fair though, this means that is merely good, instead of very good or great.

But, as referenced in the introduction, one can absolutely see the talent on display behind the camera (not to mention from a writing perspective, as he also penned the screenplay). There is a calm and assurance from PTA that many more seasoned filmmakers never have the ability to access. Given the neo-noir stylings of Hard Eight, his choice of his two lead actors is pretty much perfect. Given the actors who make appearances, it certainly seems like Anderson had his pick. Yet, he chooses actors with character to their faces. Phillip Baker Hall as Sydney seems like a man who has seen his share of trauma without ever delving into the details. John C. Reilly manages a sense of naivety without appearing like a standard, young Hollywood leading man. These casting choices allow the audience to be unsure of how Hard Eight will end.

It is notable that Hard Eight hinges on a secret. And yet, until that secret is revealed, the audience has no clue that this is what we should be thinking about. And the story is not the only thing that changes at this moment, Phillip Baker Hall’s performance, which was already great, shifts into another gear and turns on a dime. Sydney changes from a man of values and assurance to something else entirely. His turn from completely in control to wild-eyed with fear is one of those moments that will stick with you long after the end credits roll. From a story perspective, this is a gutsy decision. Hall, up until this point, embodies everything you remember from movies set in casinos and, by extension, mafia films. He is consistently impeccably dressed, in control, and has a sense of honor and decorum. These rules he lives by creates a clear delineation between him and Jimmy (Samuel L. Jackson).

This relationship in particular, though not the focus of the film, is also given adequate time to become something unexpected. Jimmy is consistently a character that pushes buttons and jumps up and down on Sydney’s nerves. In a lesser film, Jimmy would immediately get his comeuppance. This, in some ways, is a character Jackson has played before and would play again. But there is a great deal more depth here, despite limited screen time. When Hall and Jackson share the screen, Hard Eight truly pops. It might lose its luster, but I would definitely be interested in an extended cut with a bit more between these two sans the interruptions of John attempting to keep the peace.

And no discussion of Hard Eight would be complete without mentioning the one appearance of Phillip Seymour Hoffman. It is brief, but similar to watching an early Paul Thomas Anderson film. Much like PTA, even in a small (in length, not in style) performance, Hoffman absolutely owns the screen. Anderson very smartly appears to simply let Hoffman run wild, as aside from contextual reactions, no one else speaks. His character is wildly obnoxious, and yet, the camera loves him and there is a sense of regret as Sydney walks away and the film moves on from this barely connected sequence.

So, is Hard Eight as good as Magnolia, There Will Be Blood, Phantom Thread, or Boogie Nights? Absolutely not. But for many other directors, this would be a fantastic film to hang your hat on. And this is yet another reason to love services like The Criterion Channel. While his other movies get a lot of publicity (as they should), this is yet another film to appreciate for film lovers like you and me. Sure, I would probably have watched Hard Eight eventually, but the fact that it was leaving a streaming service gave me the hint I needed to finally make it happen. And don’t we all need that hint? We all have so many choices, but I’m glad I spent my time with Paul Thomas Anderson and Hard Eight.

We’ll be back soon with more excellent movies leaving The Criterion Channel!