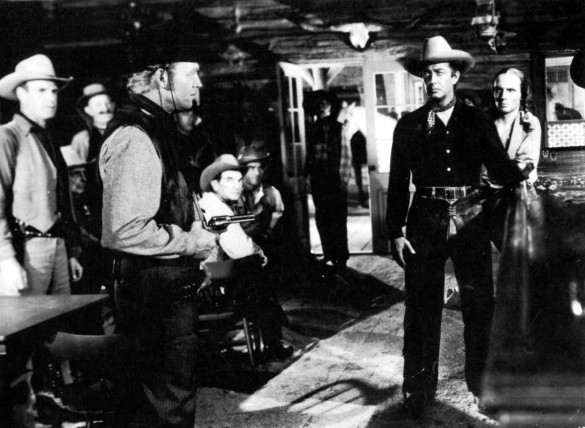 So, the month is just about over. You’re running out of time to catch these movies on Criterion!  I hope you enjoyed The Magnificent Ambersons,  I Am Not A Witch, and Loulou. This week we travel back in time, both in the year of release and genre. The western, though there have been moments of recent renaissance, is a genre that feels older, but it is a tremendously important part of American cinema. So, it is certainly appropriate for Criterion Channel to feature many of them on their service. And this time, we look at a revisionist western from 1950 in Devil’s Doorway.

Sadly, there are no extras featured on the Criterion Channel for this movie. Devil’s Doorway is directed by Anthony Mann, who directed other well-known films such as Winchester ‘73 (a classic western) and Cimarron (a now derided Best Picture award winner). Given that history, it may surprise some that he made this western that, in some ways, is so forward thinking. After all, it features a Native character (at least one) to root for and is seen as an actual human being. Of course, it is not all good news. Our Native protagonist, Lance Poole (Robert Taylor) is portrayed by a white actor. Of course, it is difficult (and sometimes pointless) to judge a movie from 70 years ago regarding diversity and representation. However, It should be noted that there is one Native actor in the film (Chief John Big Tree), playing Lance’s father, Thundercloud, in his last film role. The casting of a white actor is worth mentioning not only for these reasons, but also because it is obvious from the start, given the extensive makeup used on Taylor.

Devil’s Doorway is a movie about race, but it is also a movie about how progress intersects with race, and not in positive ways. In the opening scene, there is a seemingly random mention of the encroaching railroads and the lack of space for men to have room to live their lives. This later connects to a plot point regarding the idea of homesteading, in which people can plot out available land in a first come, first serve setup. Great idea, right? This would give people economic freedom in the West.  Remember that word, people. 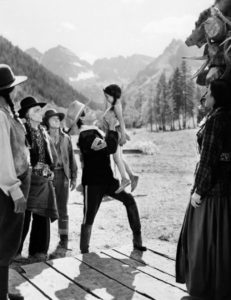 Back to our protagonist. When he first appears, he is returning home from the war and, as a viewer, he simply seems like a normal, good, honorable man. But through a local bartender, we find that he is a full-blooded Native, a Shoshone to be specific. He and his father “own” a huge plot of land. But this is ownership in that Wild West, where possession is 9/10 of the law, at least for now. But with this new homesteading law, a person can stake a claim to any officially unowned land. Smartly, he decides to go see a lawyer. Unfortunately, the only lawyer we know at this point, Verne Coolan (Louis Calhern) is a virulent racist, so he searches out another. In a particularly funny interaction, he meets this new lawyer, Orrie Masters (Paula Raymond), and upon realizing that she is a woman, awkwardly leaves her office before returning and trying again, being bereft of options. Despite the fact that he does the right thing legally, he is outright rejected from owning his land. According to the government, homesteading is for people. Natives are not people, but wards of the state.

This relationship, full of sexual tension if not pure romance, will make or break the film for the viewer. In my opinion, it works, but just barely. As the focus is on the nobility of Lance, much of the love story, in any physical sense, falls by the wayside. Visually however, director Anthony Mann makes it a point to purposefully show us the difference and the distance between Lance and Orrie. For instance, when she first makes the trip out to his ranch, he assists her off of a horse and the camera lingers on his dark hand touching her hand, gloved in white. As a note, later in the film as they grow closer, her hand is gloved in black. It is a neat little visual trick to show the evolution of their relationship. Speaking of Mann’s visual choices, the slow change in Lance’s appearance throughout the runtime, while not subtle, is quite effective. In his first scene, he is in the uniform given to him by the white world, with medals and stripes also awarded for his bravery in battle. As his frustration grows, he begins to add Native adornment and clothing. If you were to solely examine the costuming from the first to the last scene, Lance would be nearly unrecognizable. Additionally, Mann chooses to shoot him in full light near the beginning and with increasing shadow as he changes. As a matter of fact, there is one scene between Lance and Orrie late in the film in which he is almost a silhouette. This is a striking image, as well as a sign that he is actively turning his back on the white world.

Devil’s Doorway is a sad story, a story where our protagonist does the right, honorable thing at every turn, and is met with violence and death. Progress in the United States, regardless of time period, is an advantage as long as your skin is white. If you are born black, brown, or in this case, red, it is yet another opportunity to have your livelihood, and maybe even your life taken from you. Devil’s Doorway has some unsubtle touches, but is impressive in that it puts himself almost solely on the side of the Native character, and painting the white men as evil at worst, and ineffectual at best.

Join us next month for another batch of movies leaving the Criterion Channel!