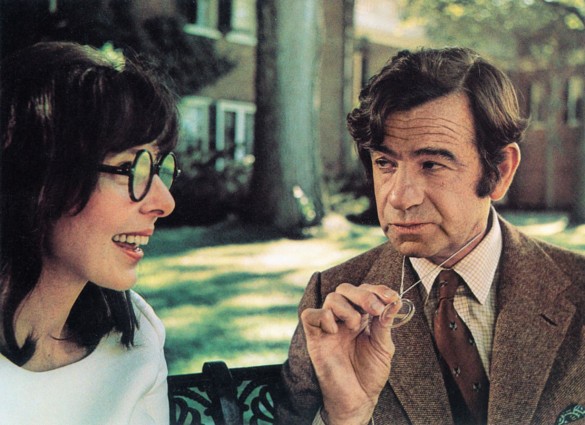 There is no genre more difficult or more subjective than comedy. I mean, think about just your own tastes when you were younger and now. Do you find the same things funny? Probably not. My tastes have changed wildly over the decades. Except Mel Brooks. He is always funny. But generally speaking, they change. Now, think about your taste and your friend’s. Different, right? Now think about time. Funny movies in the ’90s versus now? Extremely different. All of this to say that comedy is hard and changes from person to person and is dependent on time. But every once in a while, a comedy from an older era still absolutely works. And that brings us to A New Leaf now playing on the Criterion Channel.

Director (and star) Elaine May helmed precious few films, but honestly, with both this film and Mikey and Nicky in her filmography, she should be given a lot more respect. And that’s not even bringing up the fact that these two movies could not be more different in both genre and tone. A New Leaf is a deliciously dark comedy focusing on Henry Graham (Walter Matthau) a once wealthy man who has burned through his entire inheritance without a second thought. Stunned by this news, he initially plans to kill himself but is convinced by his valet to borrow a small (to a rich person) amount of money from his wildly rich uncle, and marry an unsuspecting woman of society and pay this back. Henry, unbeknownst to his kind valet, plots to both marry and kill this nameless woman, hence inheriting all of her money.

So, dark might be an understatement. But thankfully, Matthau plays this to the hilt so it is impossible to take him seriously and get lost in how monstrous he is acting. Also, his “romantic” interest, Henrietta Lowell, saves the day. She was left money by her father, but she is not really the moneyed type. She is shy, horribly clumsy, but also loving, giving, and accomplished. They meet at a party in which she spills her drink, twice. Henry, seeing an opportunity rescues her and whisks her away from a cruel hostess. May is so endearing here that you mostly forget how terrible her prospective partner is and what his plans are. After a whirlwind romance, though without much affection, she agrees to marry him and pay off his debts.

The film does a splendid job of pushing the plot forward and having the main characters make choices that will lead to an eventual change that we would never believe at the beginning of the relationship. For instance, Henry fires the cavalcade of employees in the Lowell household after finding them lacking, both in uncouth manners and crooked dealings with her books. And yes, he is annoyed by each and every one of them, and yes, you could argue that this is a purely selfish decision. But remember, this is a man who spent all of his own money through pure ignorance. Yet, for Henrietta, he hires good people and helps her manage the household so she can return to her botany research.

None of this stops his murderous plans as they head to their honeymoon, but there are still several kind moments from Henry, including assisting her in finding the right holes for her head and arm in her Grecian nightgown. To sell this growing relationship further, May is doing a lot of heavy lifting here. Her shy glances toward Henry, her desire to both please him and spend time with him, none of these come off as annoying. Instead, we find ourselves wishing that she was with someone who was truly worth her time. This continues as they return home and she names a new plant species after him. A truly genuine gift, a gift that takes him by surprise and touches him. I think this moment is the lynchpin. She, through nothing more than good nature, is beginning to find her way into his heart. Of course, comedy being what it is, he shakes this off and has one last plan to off her and live happily ever after as a rich widower.

Although this is absolutely a comedy, May’s hand behind the camera never allows us to relax and accept that everything will end happily. It is, instead, a movie that you understand only by looking back. As the climax approaches, with Henry safe on the shore and Henrietta (who cannot swim) about to float down the rapids to her death, it feels that the movie will end in a successful finish to Henry’s horrific plot. Instead, he has a last second change of heart and saves her.

In his first genuine moment of care for her, he saves her and holds her close as she shivers. It is a powerful moment of romance not usually allowed in comedy, and certainly a surprise in a dark, bleak comedy like A New Leaf. And it stands out as, yes, a surprising moment, but also one that works. The fact that we believe this moment is a testament to Elaine May as a director, as well as her and Matthau and their powerful chemistry. The resolution also powers home the importance of the title. Yes, Henry is turning over a new leaf, perhaps even against his actual judgment, and he is reminded of her importance to him by a representation of said leaf which she named after him. An act of pure love changes a man’s hellbent on murder and greed. In a movie full of darkness, Elaine May is a pure light giving just enough to change Henry from pitch dark to just a slight amount of gray. Enough to care for her and enough to make us believe it.

Join us next time for a review of Edge of the City!