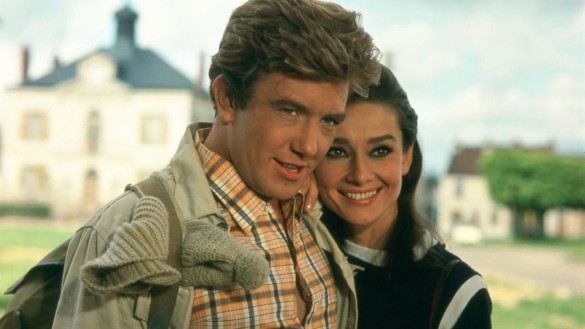 My journey with Audrey Hepburn continues with this tragicomic study of a marriage falling to pieces. This is dramatically different in tone to Roman Holiday (1953) and it is considerably less popular today. It did represent her moving into a more adult phase of her career and it was nice to see her playing an adulterer who is fed up with her husband’s irresponsible behavior. I was pleased by the direction that Hepburn was trending in with this film but my feelings on Two for the Road (1967) as a whole, are considerably more mixed.

The film traces the lives of Mark, Albert Finney, and Joanna, Audrey Hepburn, who have a lengthy marriage. It eventually breaks down after several years of tension come to a head on a trip to the South of France. They bicker over affairs that they have had, their concerns over growing older, and whether they are still in love.

My biggest bone of contention is with the attempts at authenticity that the script makes. They feel hopelessly shallow and contrived instead of helping the audience to relate to the characters. They present us with a very chic, idealized vision of what the breakdown of a marriage might look like. Every argument neatly segues into a comedic pratfall or an opportunity for Hepburn to wax poetic about the nature of love. The shifts in tone feel so carefully calculated that we feel like we are seeing a university screenwriting exercise playing out in front of us. It’s so mechanical and emotionally manipulative in execution. You just know that there will be a romantic beat, a dramatic/depressing beat, and then a comedic beat in almost every scene. I quickly grew tired of this formulaic procession.

The film wants to show us the moments when these two are bickering and can’t stand to be in each other’s presence but it’s too afraid to present either of them in a negative light. Hepburn is always captured through a soft focus lens and Finney is always smoldering. This means that it is hard to take them seriously when they’re screeching about infidelity or hotel fees. They have to remain sexy movie stars in situations where one should seem decidedly un-erotic or appealing. It’s just like watching a daytime soap opera and scenes that should be emotionally wrenching, end up feeling like camp.

All of their arguments are so written and you can tell that the germ of any true emotion has been wiped out by purple dialogue. They have taken the outline of sentences that an actual human being might utter and then replaced them with self-satisfied jokes that they probably spent hours formulating. I know that you rarely hear quotidian speech in films and I love it when screenwriters come up with a heightened lexicon for their characters to use. However, if you are going to do that successfully, you have to convince the audience of the world that you have built up and the actors have to sound comfortable when they are saying things like “Just because you use a silencer, doesn’t mean you’re not a sniper!” Two for the Road doesn’t manage to do either of these things.

I’m sounding like a negative Nancy here and ripping into this film but it does have its merits. The 1960s fashion is pretty groovy and Hepburn’s natural loveliness is only enhanced by Paco Rabanne’s figure-hugging sportswear. Of course, no ordinary person could get away with wearing a PVC suit or a stripy swimsuit which could easily lead one to appear heavy. She is able to dazzle in a simple red sweater and jeans but it never hurts to put her in some couture. Finney’s wardrobe is less impressive but who is examining his appearance when he has one of the most beautiful women in the world standing next to him?

It also moves along at a nice pace and Stanley Donen was smart enough to cut this off at about 110 minutes. This made by a big studio in the 1960s and that means that it could have easily been turned into an elephantine production. I don’t like the tonal shifts but Donen does know how to move things along quickly and he never lets us settle into one location for too long. I could praise the cinematography for capturing the beauty of the South of France but I don’t think it takes that much effort to make that area of the world look beautiful. I also felt as though the prettiness of the surroundings took away from the nastiness of the conversations that Mark and Joanna were having.

At the end of the day, Two for the Road is not a film that I would warn people away from. At the same time, I can’t see why it has such a great critical reputation and its place on this list seems unnecessary. I do appreciate the fact that this is the rare film on the list which deals with the ebb and flow of a marriage, rather than being about youthful, impulsive infatuation. This film is concerned with grownups and the complicated reasons behind their inability to fully separate from one another. That is admirable and I just wish that the screenwriters had been able to achieve all of those great ambitions when it came time to actually write the script. As you can expect, I don’t think this should have taken a spot on the list.