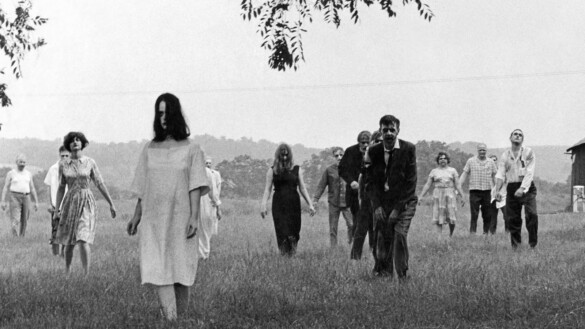 Here in the last three months is another slate of films by Criterion. These releases all have a dark theme for the month, matching the horror tales that create Halloween on the 31st. One is a classic horror film getting a reedition, while the other five are first-timers. One goes back to 1944 and is a hidden Frank Capra classic, the most recent being from just 2019 and a reflection of a Central American tragedy. Three films are from the same year, 1997, in which an auteur, an independent debut, and a Japanese horror hit all step into the ring to get their honor under the Criterion Collection.

Cary Grant, Peter Lorre, and Raymond Massey star in a film adapted from the stage, a screwball comedy full of gallows humor. Or, should I say, poisonous? Two old women who live together give a ghastly surprise to their returning nephew who has just gotten married on Halloween. Bodies are found in the cellar, victims of the aunts’ Black Widow scheme, and there are others who live in the house who may be next. It is full of wicked humor that keeps the macabre tone throughout the movie and was yet another notch on Frank Capra’s belt of hit comedies.

The only re-issue of the month, George Romero’s independent horror classic lives on continuously 54 years later and has influenced an entire genre that followed. Made for almost nothing, the timing of the release certainly helped its release as it seemed to be an allegory for what was happening in America at the time. With only $100,000 to spend, Romero and his crew made history. They sowed the seeds for future horror films with his bloody violence, which added to the controversy, being released as a matinee film rather than a midnight screening. This was done right before the MPAA Rating System was unveiled, but the toothpaste was out of the tube on what horror would become.

Director Kiyoshi Kurosawa mixed horror and noir in this shocking tale of a detective (Koji Yakuso) who tries to find out why a different murder with a different killer uses the same methodical approach to its victims. The more he looks deeper, the closer he gets to the central figure who runs these series of mind games that the detective can’t shake loose. It is such a demented take on the psychological thriller and one of the creepiest films in the last 25 years that it is worth a blind buy.

Kasi Lemmons, who directed the upcoming Whitney Houston biopic I Wanna Dance With Somebody, made her directorial debut with this Southern gothic drama following a young girl who witnesses her father’s infidelity. Thus, begins a string of events that leads to tragedy as Eve learns the harsh reality of life. Mixing in Creole voodoo adds karma and revelation to dark secrets beyond infidelity, making such a stirring film with Samuel L. Jackson as the father, Debbi Morgan as “The Black Widow” practitioner, and a young Jurnee Smollett as the young daughter who witnesses the family’s house of cards falling upon them.

David Lynch created this cult classic which preceded Mulholland Drive with its open interpretations and surrealism that breaks from a narrative story. Bill Pullman is a musician who is accused of murder, and while on death row, he suddenly disappears and becomes another man who is freed from jail. Lynch, always in style, pushes the boundaries of what is unexpected and what really is down the road. Patricia Arquette, Robert Blake, and Balthazar Getty also star in this postmodern noir.

Using his home country’s tragic history as a backdrop, Guatemalan director Jayro Bustamante’s horror story is filled with political commentary and indigenous folk. A former dictator has just been acquitted of crimes against humanity during his rule and while people protest outside his home, a series of disturbances take place that brings back his heinous crimes to him that will haunt his family. The film has a similar feel to Guillermo del Toro’s The Devil’s Backbone, in which a country’s civil war is the setting and a haunting presence comes in after its villain. Bustamante uses Guatemala’s horrendous war crimes against the indigenous to go after the establishment who’ve evaded justice; but in his realm, justice comes from an unlikely source.