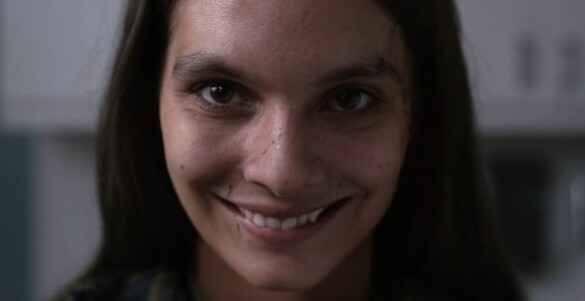 Synopsis: After witnessing a bizarre, traumatic incident involving a patient, Dr. Rose Cotter starts experiencing frightening occurrences that she can’t explain. Rose must confront her troubling past in order to survive and escape her horrifying new reality.

While horror continues to evolve, there was nothing quite like the horror movies of the 2000s. Driving on pulp imagery and mean spirits, there was something kin

Smile follows emergency psychologist Dr. Rose Cotter (Sosie Bacon), after witnessing a tragic event. Following it, Rose’s life upends on her as bizarre, unexplainable visions begin to overcome her life causing her to descend into madness. This forces her to accept her past trauma and cope with her new trauma.

While there is a lot of good in this, there are a couple negatives to get out of the way. We’re introduced to the central conflict really early on in the film. In some movies that’s a major plus so we can get moving right away. With Smile however, they never found how to pad out the 115 minute runtime in a meaningful way. The pacing just kind of stops and goes like a teenager learning how to pop a clutch for the first time. There’s a better 90 minute or so movie lying in that unrendered 115 minute runtime.

Furthermore, the performances are just not that great. Sosie Bacon? The only slam dunk in this movie. After that? It’s kind of a Where’s Waldo of something to latch onto. Jessie T. Usher was kind of there, Kyle Gallner delivered the performance of a “Lifetime”, and Gillian Kisner was just yelling for most of her screen time. I didn’t come into Smile thinking “man, this supporting cast is gonna tear this UP,” but I kind of wish there was something there.

Moving past that though, Smile has some of the best jump scares and horrific imagery I’ve seen all year. In coordination with some of the best sound design in a horror film in recent memory, the jump scares really pop. Additionally, the set up for these is superb. One moment you’re really locked in to what is happening on screen, then BAM – the brown note of scares. The things that they show you are gory and bloody in the most delicious way imaginable.

To add on about the sound design, the creators of this movie created a soundscape that really lures you in like a siren’s song. All making for an anxious environment that brings the viewer closer to the experience that Rose is going through. The few moments of solace the viewers have are relaxed. Even in moments where vibrant crowds are present, when the horror isn’t in the driver’s seat, the sound is brought down to give the audience some time to collect themselves. Then, when it’s time to strike, the jump scares are given a heavy sforzando, breaking any solace you had found previously.

There are a lot of horror elements that Smile directly rips from. You can see inspiration from media such as PT, It Follows, and The Ring. These elements are woven together into one spooky narrative while maintaining its own sense of identity. It does however tread on tropes that are mainstays in horror (such as the ever present menacing figure, or limited time left alive). But Smile isn’t looking to reinvent the wheel – it does a damn good job sticking to what’s known and it doesn’t need to be anything else.

Smile has an oppressive atmosphere dichotomized by the backdrop of upper middle class suburbia. Horror in suburbia isn’t an uncommon trope, but this movie doubles down on the horrors that derive from it. Using the “smile” as the embodiment of the trauma we hide is an interesting idea. Whether it fully lands could be debated, but I still appreciate the set up and environment for what it is.

What’s most bizarre is when you’re not focusing on the conflict at hand, Smile is extremely goofy. Here’s an example, halfway through the movie an argument ensues where a character says “It’s genetic isn’t it? Mental illness”. Like hold the phone, did I hear that right? This moment just knocks the wind out of you. And it’s pretty much like this any moment where the scare factor isn’t dialed up. But miraculously, even with this goofiness on display, Smile can somehow bring it back and become scary again in a matter of seconds.

Much like the horror movies of the 2000s, this movie just feels mean. For most of the horror movies released this year you were given some reprieve at the end. Whether the incident was some sort of misunderstanding or the final person makes it out, 2022 had very few horror movies that ended like Smile did. As the credits roll, you feel cold as the entirety of the experience tolls on you. A feeling that absolutely rules and owns.

Smile is definitely not for the faint of heart. There are some brutal scenes and a decent handful of jumpscares that’ll make any moviegoer’s skin crawl. For those who are on the fence about Smile, this movie is a great time and is best experienced with a big, rowdy crowd. While I don’t think it’s the best horror movie released this year, I do think it’s the meanest and exhilarating of the bunch. It is a horrifyingly good time from start to finish.