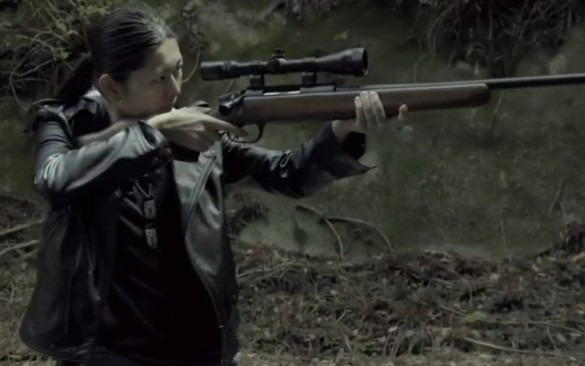 Synopsis: Karen, an American housewife living in Tokyo, gets peer pressured into playing the Kokkuri-san (a Japanese version of Ouija) and in doing so accidentally angers a deity who demands retribution in the form of bloodshed.

If you go in blind, Ouija Japan will likely not be what you think it is. I went in knowing very little, presuming that I would be getting a Japanese spin on a film like Mike Flanagan’s Ouija: Origin of Evil or the Tawny Kitaen-vehicle Witchboard. And while I am admittedly somewhat disappointed that this movie is not quite either of those, Ouija Japan at least manages to be an amusing alternative. Please note, however, that I’m using “amusing” generously. I mean, did I smirk merrily on occasion? Yeah. Was I entertained every now and again? Sure. Because the movie lets itself have fun, which is fine. But that’s just it. The movie is simply… fine.

As a title, Ouija Japan is pretty misleading. For the record, yes, there is in fact a Ouija-adjacent activity played (known as Kokkuri-san in Japan), but after the inciting incident in which Karen (Ariel Sekiya) and some other housewives unwittingly awaken a local fox deity, the game itself has very little to do with how the rest of the story goes. Instead, we’re given another contest of sorts. The fox deity appears as a game on the women’s phones in the form of an app. The housewives are then pitted against each other and must kill one another until only one is left alive. Where do they get their weapons, you ask? Simple, they can purchase them in the app and they will just materialize in their hands. Swords, baseball bats, guns—it’s all a matter of how much money you’re willing to pay the disrespected deity. Sounds kinda fun, right?

Well, the film, unfortunately, suffers from having a passive leading performance. For the majority of the runtime, Ariel Sekiya’s Karen is just too meek to carry the story. On the one hand, the choice makes narrative sense since she’s meant to be a timid fish out of water. As an American who’s only been living in Japan for six months, Karen understandably does not yet have a firm grasp of the language. This gives the meaner members of the group plenty of opportunities to mock and bully her, causing the frequently humiliated Karen to naturally turn inward, which puts Sekiya in a tricky situation as an actor. Making a docile character captivating to watch can be done, but by playing into Karen’s reticence (and not much else) a bit too much, Sekiya renders her an uncompelling protagonist.

It’s too bad that she’s so uninteresting because the action around her is such a fun flavor of ridiculous. Director Masaya Kato stages the combat like he’s designing a live Capcom video game. A lot of the fighting is done in profile like we’re viewing a Street Fighter match unfold, and we’re even given a little metric in the corner of the screen so we can monitor the tournament’s progress. These sequences are fairly enjoyable. It’s not every day that you get to watch a group of Maxxinistas slash, bash, and shoot each other dead. Some of the women are downright vicious, which inadvertently makes Karen all the more boring by comparison. Luckily, as Karen manages to somehow keep surviving the melee, she incrementally levels up and becomes more dynamic. The film gives her a slow and steady build, but by the time Karen reaches her final rank, I had regrettably already checked out.