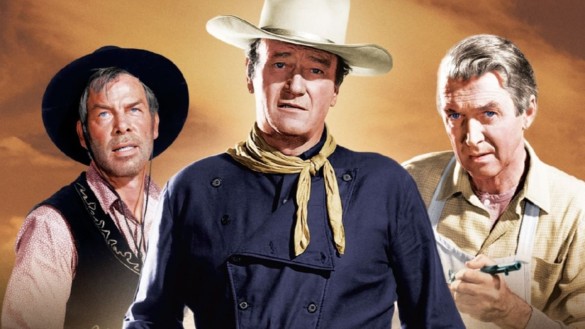 Director: John Ford
Writers: James Warner Bellah and Willis Goldbeck
Stars: John Wayne, James Stewart, Lee Marvin, Vera Miles, John Carradine, and Andy Devine
Synopsis: Liberty Valance, a dangerous cowboy, threatens the residents of a small town. He faces resistance from Tom Doniphon, who wants to take him down with violence, but the situation is complicated when the intellectual Ransom Stoddard is introduced into the mix. Stoddard and Doniphon have to fight to determine what the future of their society will look like.

The Man Who Shot Liberty Valance (1962) has a real stunner of a finale but, my goodness, does it take its time getting there. You have to sit through several hours of James Stewart delivering dry lectures to dead-eyed children and Vera Miles’s inexpressive face wobbling around on the screen. You know that important information is being communicated but it is hard to stay engaged when so many scenes feel like they could come out of one of those government sponsored educational videos that is meant to teach children about life on the frontier. This means that the last thirty minutes provide a thrilling, unexpected adrenaline rush. Everything suddenly kicks into gear and John Ford brings the big guns out to play. I can see why the contemplative nature of Ford’s storytelling has made this a favorite of critics, I just wish that it were slightly less uneven.

The small town of Shinbone serves as the setting for the story and when the film opens, the town has been terrorized by Liberty Valance (Lee Marvin) for many years. He is a dangerous cowboy who wants to control various frontier towns and the locals are too afraid to stand up to him. Tom Doniphon (John Wayne) believes that Valance can only be defeated if he is able to violently overwhelm him. His views are contradicted when an idealistic young lawyer, Ransom Stoddard (James Stewart), arrives in town. Stoddard believes that education and intellectual debate could create social progress and remove the need for violence in resolving arguments. The two men are frequently in conflict and Doniphon goes berserk when he notices that his girlfriend, Halle (Vera Miles), has developed feelings for Stoddard. When Stoddard is forced to defend himself during one of Valance’s attacks, his actions have a long-lasting impact on both of their lives.

Ford derives a lot of power out of the tragicomedy behind the film’s final scene. Stoddard is a man of principle and he has left behind a positive legacy as a politician. He has used his reputation as a defender of innocent small-town people who was willing to use violence in order to get the job done. The myth that grew out of the story of him murdering Valance, has done more to help his reputation and further his political career, than any of the speeches that he has given about his interest in education. In some ways, it is positive that he has been able to create real change and civilize a part of the country that had been wild and anarchic for such a long time. At the same time, he hasn’t quite managed to stop people from mythologizing the uncivilized Old West, in which violence was romanticized and people ostensibly had more freedom. Even though progress appears to have swept through the area, the Stoddards of the world are still at risk of being called weak by men who claim that they follow the rules of the Old West. Society is always on a knife’s edge and our nostalgia for the past can prevent us from appreciating the joys that can come with an increased level of stability.

There is still a layer of sweetness that hangs over the proceedings, as Stoddard did manage to convince Doniphon to respect his viewpoint rather than dismissing it out of hand. On a small scale, it is still possible for people to engage in respectful debate and treat one another cordially while acknowledging the fact that they do not agree on a lot of important issues. On a larger scale, he seems to mourn the fact that Stoddard will be best remembered for something that he did not do. The achievements that matter to him, will be forgotten by most. The iconic line, “This is the West, sir. When the legend becomes fact, print the legend,” is often used as a laugh line of sorts. With a wry smile, fans of Westerns will pull it out as an example of the genre’s unique power to shape the average American’s view of history. Within the context of the film, it seems much sadder than that. The line displays the fact that human beings are programmed to respond to legends more readily than they do to nuanced, detailed versions of events. There is nothing insignificant about humanity’s inability to move beyond myths and legends.

The finale gives you so much to chew on in the way of deconstruction of Western myths and the eternal conflict between anarchism and civilized society. It’s easy to end the film on a high and forget the fact that you were close to nodding off during the scenes that preceded this ending. This isn’t as perfectly engineered as one of Ford’s pulpier dramas. It doesn’t have the relentless energy of, say, Stagecoach (1939), which, for all its flaws, manages to explore at least four major themes whilst also presenting the audience with engaging, likable characters and subplots that were pleasant diversions. On multiple levels, it kept the audience entertained, and The Man Who Shot Liberty Valance doesn’t quite reach the same level.