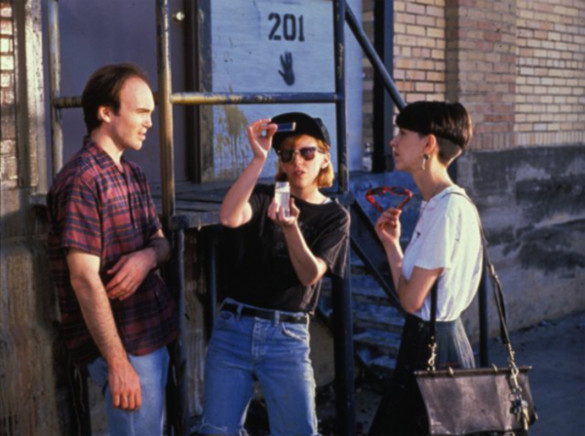 Looking back on the career of Richard Linklater, a fair amount of his success and influence likely comes from the cult popularity of Dazed and Confused. But that film–which was an early display for stars like Matthew McConaughey, Renée Zellweger, and Ben Affleck–probably would have never been possible if not for Slacker. Linklater’s second feature and first theatrical release made its official New York debut 30 years ago this July. Though it’s not typically as popular and heralded as some of the director’s later films, it provides the most unfiltered look into his indie style.

The film is set in Austin, Texas, and actually premiered there a year before its release in New York. After making waves in the town that it depicted, Orion Pictures bought the film and sent it to Sundance, where it competed for the Grand Jury Prize for Dramatic Features. The film’s path through conception, production, and distribution is a quintessential tale of the making of an independent movie. Rather than building a set in a studio backlot, it was shot in the streets and neighborhoods of Austin itself. Instead of hiring professional actors, Linklater brought on friends and acquaintances willing to help him realize his vision. What resulted was a collaborative effort and the completion of a truly unique movie.

The content of the film itself is difficult to pin down in a single review. Like many of the director’s films, it is plotless in nature. It begins with a character, played by Linklater, getting off a bus and into a taxi. For his short trip in the cab, he rambles to the driver about dreams and alternate realities, claiming, “Every thought you have creates its own reality.” Though it may not be clear when approaching Slacker for the first time, this character is delivering the whole essence of the film in the first scene. What follows is an expedition through a primarily Generation X subculture of the city between a vast number of characters. Unlike most ensemble films of this nature, the various stories never connect or result in a major climax. We move from person to person almost randomly, as they pass on the streets, thus following only the brief realities the film allows us to.

The most impressive aspect of the film, which had a budget under $25,000, is how seamlessly it makes these transitions work. The use of Steadicam by cinematographer Lee Daniel is essential here, as much of the film consists of tracking shots as characters move along a sidewalk. The changes typically occur either as another character leaves the conversation, or as they pass a different character. When these transitions are not occurring, the film invites us to sit in whichever reality is present. The editing by Scott Rhodes is impressive, as the film takes place over the length of a full day but feels as if it’s in real time.

These realities often consist of conversations or monologues featuring a wide range of topics. The resulting dialogue, which often comes off as if improvised, ranges from profound to oddly humorous, and it’s almost always completely random. It’s impossible to outline all of the interactions and discussions that take place, but there are a few that stand out. These include a middle-aged man who goes off about government conspiracies involving extraterrestrial life, an old man promoting anarchist ideology to a young thief, and college-age young men helping their friend get over a breakup by throwing items off a bridge. The most recognizable instance in the film, however, is courtesy of Teresa Taylor’s character attempting to sell what she claims is Madonna’s pap smear to a few uninterested friends.

To encapsulate the various instances of the film, some of the various topics include the likes of JFK assassination theories, the 1988 presidential election, climate change, incarceration rates, gun violence, cars, music, and even Scooby-Doo. While the film clearly does deal in some major issues, it’s questionable how often the characters deliver their thoughts in a ground-breaking manner. The dialogue is rarely as thought-provoking as Linklater’s work in the Before Trilogy, but it does give an undeniable taste of his thought and style. And of course, the point is not to be totally reflective.

Granted, some might find the deep and pseudo-deep meditations, including the intro from Linklater’s character, either gimmicky or self-indulgent. But the film certainly succeeds in maintaining curiosity and creating characters with little time. The film is less useful in the individual aspects, however, and more concerned with its role in representing a “slacker” subculture in Austin. It’s an exercise in having a location serve a major role in the narrative (or non-narrative) as if the city itself is a constant background character. For that, mixed with the involvement of the cast, the film deserves nothing but praise.

Slacker is certainly not the only, nor the most influential of low-budget independent filmmaking from the 1990s. But it is a model example of a feature depicting traits that came to define a filmmaker’s career, and that is easy to see 30 years after the fact. It’s also distinctly self-aware of its indie status, displayed by the final scene being shot with a Super 8 camera. If for no other reason, the film is worth watching (I highly recommend the Criterion Blu-Ray) for its cultural reflections on a group of people in a specific city. As the aforementioned anarchist claims, “This town’s always had its share of crazies. I wouldn’t want to live anywhere else.”