Movie Review (Tribeca Festival): ‘No Man of God’ is a compelling view of a worthless subject 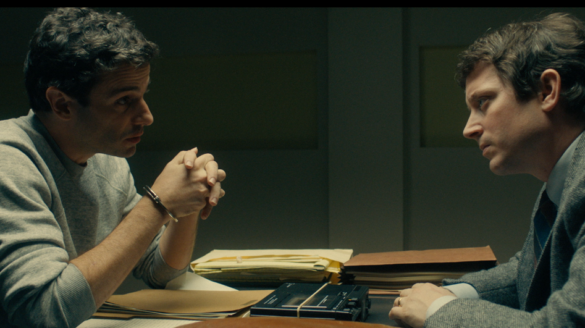 “Normal people kill people,” Ted Bundy (Luke Kirby) tells Bill Hagmaier (Elijah Wood) during one of their conversations in No Man of God. Maybe this is the most valuable conclusion reached on the new film by Amber Sealey and the latest project focused on the notorious, odious rapist and serial killer, Ted Bundy.

The movie follows Bill Hagmaier, one of the most famous and important profilers of the FBI, as he is assigned to talk to Ted Bundy as part of the Bureau’s efforts to profile famous criminals. As a rookie, he accepts the case that no one wanted, considering that Bundy is also known for his contempt for FBI agents. They start a correspondence relationship and soon he successfully starts talking to him. Always under Bundy’s rules and following an approach of mentorship, Hagmaier lets Bundy know that he is there to learn and understand, not to judge or try to get the confession of more than 30 cases that are still pending.

The film is at its best during these intimate conversations. Both characters are intelligent and untrustworthy, playing games with one another, trying to find a weakness that will allow them to dominate the other. There are some discussions that are valuable in our current scenario of oversimplification of complex people and criminals. Bundy appeals for his humanity and mental sanity by making Hagmaier understand that his actions were not because he was a monster or because he was sick. It was all a matter of choices. The demystification of the criminal mind is the most valuable aspect of the film.

The script by Kit Lesser (aka C. Robert Cargill) is the weakest point by being messy and uncertain of what it wants to convey. Sometimes it is harsh and unsympathetic towards Bundy, others it appeals for understanding and empathy. There is a rollercoaster of opinions that make it difficult to define a tone of complete condemnation or sympathy towards the murderer. Furthermore, it seems as if Lesser were aware of this undecidedness because towards the end, in an outburst of frustration, Hagmaier condemns Bundy’s actions when he is failing to see his own faults and starting to act as a victim.

In this regard, the character development is messy. Bundy is introduced as arrogant, thinking that he is mentally superior to everyone else. Then, towards the end of his life, his demeanor changes and he goes through a complete undoing that is out of character. The confident man is substituted by a martyr. The same goes with Hagmaier, while he starts as the heart of the film and the sole focus of the story, at the end, we realize that we do not know anything about his life. We only know him through his ambiguous relationship with Bundy.

These flaws are dealt as best as possible by its protagonist duo. Elijah Wood and Luke Kirby give good performances. Wood talks gently but clear, using his big blue eyes to offer innocence and sincerity when he tries to establish a rapport with his counterpart. Kirby, on the other hand, is an inspired Bundy, being unsettling and attractive, manipulative and yet, insightful. He brings to life Bundy’s voice tone (immortalized in his famous voice tapes), intensity, and egotism.

While the film tries to avoid any fascination towards Bundy, it is not completely successful. Everyone is aware that Bundy is guilty, and still, he has people around him that work tirelessly to save him when his execution date approaches. Hagmaier tries to delay his death because he wants him to confess. Bundy’s defense lawyer fights and cries because she is against the death penalty. Bundy luckily surrounds himself with deeply responsible and just people that, by following their own causes, fight for a pious cause that is unworthy.

It is maddening that Ted Bundy movies and shows keep being made. It is widely known that Bundy was an enigmatic and challenging character. Something about his looks, intelligence and seemingly “normal” façade still unnerves those that cannot marry the fact that a psychologist and lawyer student could be the cruel murderer of more than 30 women. I understand the appeal. However, this character does not deserve attention, the very thing that he craved while alive. It is unfair and indignant that he keeps inspiring and propelling movies and TV shows.

No Man of God proves yet again that it is always about the mastermind and never about the victims. While this film tries to break that mold and offer condemnation and awareness, it is still a Ted Bundy film. His victims deserve more than this unhealthy and exploitative obsession.