Chasing the Gold: Why ‘CODA’ Deserves To Win Best Picture 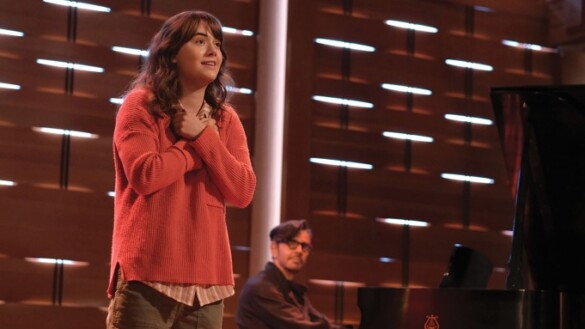 Once I watched CODA in November of 2021, I knew I was in love. Much like Lady Bird, it gave me an opportunity to reflect on my own young adulthood and the relationships with my family that have gotten me where I am today. It is a film that is both simple and profound, painting a portrait of familiar strokes for a family dynamic I will never experience and in the months since, it has gone farther in the awards race than I ever expected. It may have been the showstopper at the 2021 Sundance Film Festival, but awards season is typically dominated by the films of the latter half of the year. And yet, this Apple Original has won the top prizes from SAG and HCA, as well as awards for Troy Kotsur in Supporting Actor (which I praised in this article). Its recent wins have stirred up controversy on Twitter regarding its chances at taking home Best Picture at the 94th Academy Awards. So, consider this article a response to all the “CODA Bad” takes going around on Twitter.

CODA is a masterclass in acting that few films ever achieve. So much of each character is enforced by the performances, by the small movements and facial expressions that enable us to buy into this coming-of-age dramedy. I have sung the praises of Emilia Jones and Troy Kotsur previously, but the rest of the cast shines bright too. Marlee Matlin, Eugenio Derbez, Daniel Durant, Amy Forsyth and Ferdia Walsh-Peelo all deserve praise for their hard work in bringing this fictional world to life. Matlin and Durant are fundamental to our understanding of the conflict between Ruby and her family, as their characters show the most opposition to her goals. Each of the Rossi family must be both unbearably awkward, as families often are, whilst staying sympathetic and lovable. Matlin, Kotsur, and Durant capture that family essence perfectly. The ASL representation alone is worth something here, but it’s performed with the perfect amount of emotion to keep us invested in this family. And yeah, it’s super impressive that Emilia Jones learned ASL for the role of Ruby. Frankly, that should have earned her a nomination for Best Actress, had this year not been absolutely stacked in that category. It’s that family dynamic that is fundamental to this genre, and it wouldn’t work without the actors and actresses we have at the centre of this film.

But it’s not just the Rossi family that is enabled by strong performances. Eugenio Derbez has received so little praise for his role as Mr. V that I am flabbergasted. In all fairness, his role as a supporting actor was always going to be in the shadow of the masterful Troy Kotsur, but his work in capturing the essence of a high school choir teacher could not be more perfect. The way he manages to put on the “persona” of a high-energy choir teacher when all the students are around, and then revealing the more reserved side in private, is so real to my own experience with high school choir teachers. There’s a depth to Mr. V that is only seen through the lines on his face as he works with the group. It’s those glances that show how proud he is of the students and the work that needs to be done to enable them to reach their potential.

The world may be overly eccentric and socially awkward, but it’s balanced with a sincerity that feels unmatched anywhere else in this year’s cinema. It’s a celebration of the transition to adulthood, that doesn’t paint the teenage or adult years as inherently lesser to one another.  And that stems out of a script that evolves over the course of the runtime. If you were to run a Twitter poll of the most impactful moment in CODA, there would be a split between 3 separate moments in the third act. And while the third act turns on the waterworks, those effects wouldn’t be possible without the other two acts that set up the relationships driving the narrative. Characters are introduced in the simplest, most reductive versions of themselves so that as Rubi learns to appreciate her family, we get to see the layers to them as well. Those reveals are brought about by every part of the filmmaking on display.

CODA may not be the flashiest or most complex film from this year’s lineup. It may not have the infectious energy of Spielberg’s West Side Story. It may not be as big as Villeneuve’s Dune. It most certainly doesn’t twist like Campion’s The Power of the Dog. But its building blocks are no less intentional or well crafted. For a film about music, its sound is often very reserved. From the sound mix that amplifies the intensity of discussions happening in ASL, to the score that populates only the most important moments, CODA is quiet in ways that would seem counterintuitive to a story about music. Considering the training that Jones and Walsh-Peelo underwent to record 4 whole songs that were largely cut down, it becomes crystal clear that Heder and her team of filmmakers knew what truly mattered in this story wasn’t the flash of raw talent but the restraint that enables empathy to shine through.

At the end of the day, that emotion is fundamental to a story like CODA. If it were to win Best Picture, not only would we be seeing the third female directed Best Picture winner, but also the first Best Picture win to predominantly focus on the D/deaf community. About 40% of CODA’s screenplay was made for ASL, which is a feat worth remembering. After the hell that has been the last 2 years, I can’t think of a better way to celebrate than to award a film all about bringing joy to the world despite challenges and questions we don’t always have the answer for.

I leave all of this with a quote from the great Roger Ebert:

“For me, the movies are like a machine that generates empathy. If it’s a great movie, it lets you understand a little bit more about what it’s like to be a different gender, a different race, a different age, a different economic class, a different nationality, a different profession, different hopes, aspirations, dreams and fears.” I may never be a part of the D/deaf community, but I know I can empathize with them because we all face similar hardships and questions about life. And CODA let me see another aspect of that.