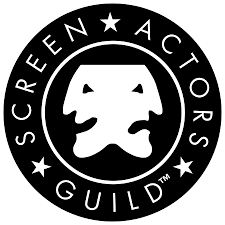 Over the last few years I have been able to sit with SAG voters and discuss with them their thoughts regarding the nominees for their years ceremony. That changes this year in one way, by being able to publish it for the website I write for here on Insession, compared to tweeting them directly from the Academy Queens twitter. Not only does it allow for more of the discussion to be shared but I thought it would be more fun.

The day after the nominations came out for the 28th annual SAG awards I was on the phone with a friend who is an actor in LA, who is usually the first one I can depend on when it comes to a yearly anonymous ballot. We’ll call him “SAG voter 1”.

Joey Gentile: Are you ready to dive in?

JG: Perfect. SAG voter 1, the nominations are out, let’s start with Supporting Actress. A surprise nomination for Cate Blanchett for Nightmare Alley happened yesterday. With your nominees here, tell me your thoughts and who you’re going to be voting for. 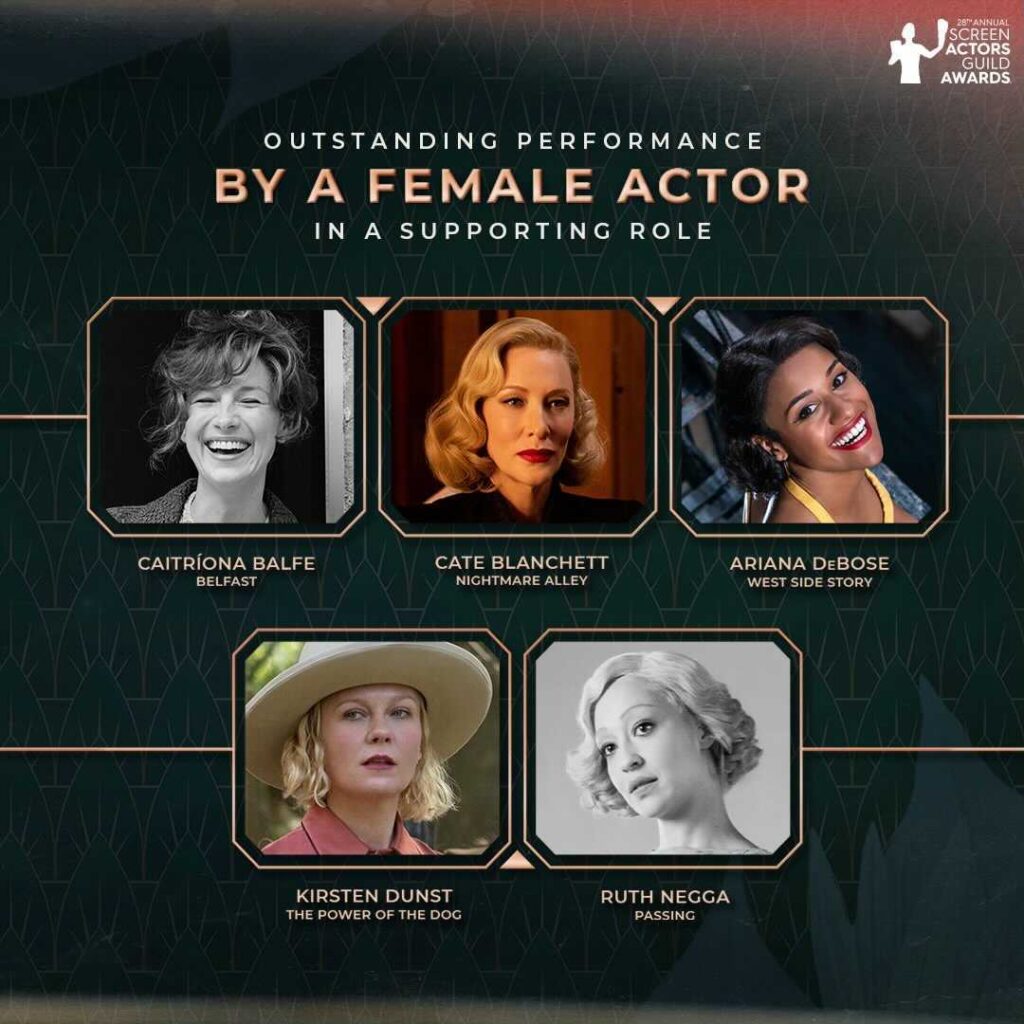 Ruth Negga, Passing: What a performance, it truly is so unique and quiet (like her first nomination for Loving) I really do like her. I think she is quite the marvel on screen and I’m glad to see her back in the race but I can’t help feeling she was so overshadowed by her co-star Tessa Thompson. I also find it interesting that Ruth Negga has been in the awards race now for two roles that deal with race. I’d like to see what else she can do.

Caitriona Balfe, Belfast: She plays the safe mother role. It’s by no stretch of the imagination what she can do, and with that I’m afraid she’s just so plain in a role that requires so little of a very talented actress. We’ve seen this type of performance before.

Cate Blanchett, Nightmare Alley: Let’s start with the fact that the movie isn’t very good, it’s like 2 separate movies in 1 and it’s a mess. With that being known, it has 3 great stand out performances, Cate being one of them. The other 2 being Rooney Mara and Mary Steenburgen (who the latter really should be here as well). Cate is tremendous in a dull movie and I really want to see more of this noir styled work from her.

Ariana DeBose, West Side Story: Let the record state that I’m not a big fan of musicals at all, and West Side Story is no exception. This movie is so unnecessary and this performance is so bland. DeBose isn’t bringing anything new to anyone who has played Maria before and she’s really not great. This is the prime example of a shiny object performance that people are only attracted to due to the shininess of it all. Like Balfe in Belfast we’ve seen this before, hard pass. (I would like to point out that if we were to have a supporting musical performance nominated this year, Olga Merediz in In the Heights was RIGHT THERE.)

Kirsten Dunst, The Power of the Dog: What Dunst is able to pull off here is a beautifully haunting layered performance. Not only is she vastly overdue for some awards and love from her peers but she is sublime in a movie I didn’t like overall. Dunst is magnetic and is the highlight of her film. I almost wonder what one more “umph” styled scene in the vein of her drunken sale to the Native’s would do for her campaign this year.

I’m voting for CATE BLANCHETT, who is easily the best thing in her movie and a nice welcomed surprise in this category that already feels stale outside of Dunst. If Dunst had maybe one more scene she would have my vote but something is missing despite me being knocked on my ass by her.

JG: Wow, definitely took me on the curveball win there for you but who doesn’t love a good curveball? Okay, how about Supporting Actor? 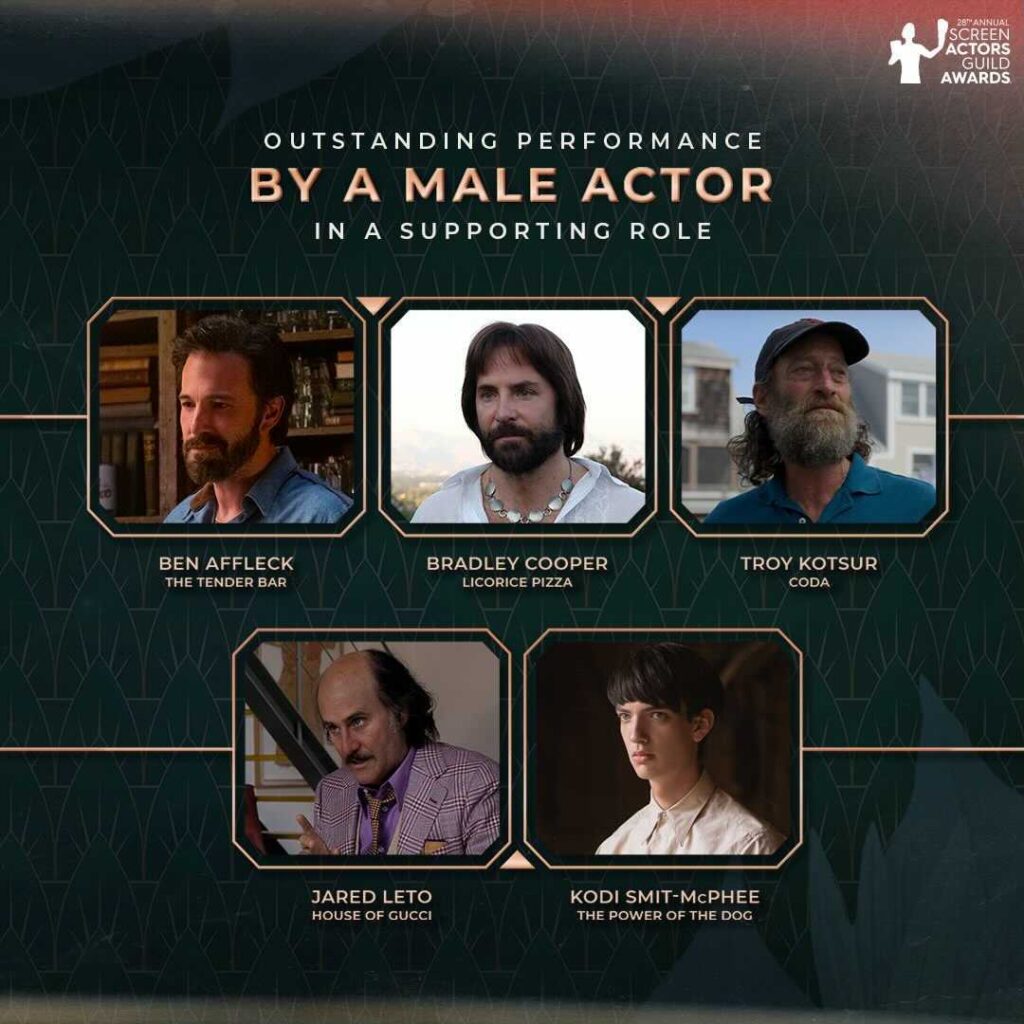 Kodi Smit-McPhee, The Power of the Dog: Um, not really sure what he’s doing in the film to warrant a nomination from anywhere. He smokes a cigarette like he’s in a noir film and not Blanchett but kudos on getting the Golden Globe.

Ben Affleck, The Tender Bar: As someone who’s worked with Ben in the past I love that he’s getting some acting awards love this year, but knowing what he can do in person and his past work before I’m not sure if he’s really showing us anything new here in the film. The Last Duel was right there if you really want to reward him in a supporting role, this is just Ben being Ben really.

Jared Leto, House of Gucci: Listen, I really like Jared Leto as an actor, hell I voted for him last year to win for The Little Things he’s absolutely magnificent in that. In House of Gucci though? Come on. While not bad in the vein of someone like DeBose in her film, he’s just a Lot with a capital L. It’s kind of the epitome of the saying “less is more”.

Troy Kotsur, CODA: I really didn’t like the film, but Kotsur is a marvel. Not only does he perfectly balance comedy and drama he does it with such ease, it’s like breathing, done so effortlessly. Not to mention the scene with him and his daughter near the end is legit tear jerking. I’m so happy he’s getting nominated this year for his performance in this.

TROY KOTSUR wasn’t in this lineup. Troy has my vote and I really hope he gets this win and Oscar win if he is nominated. 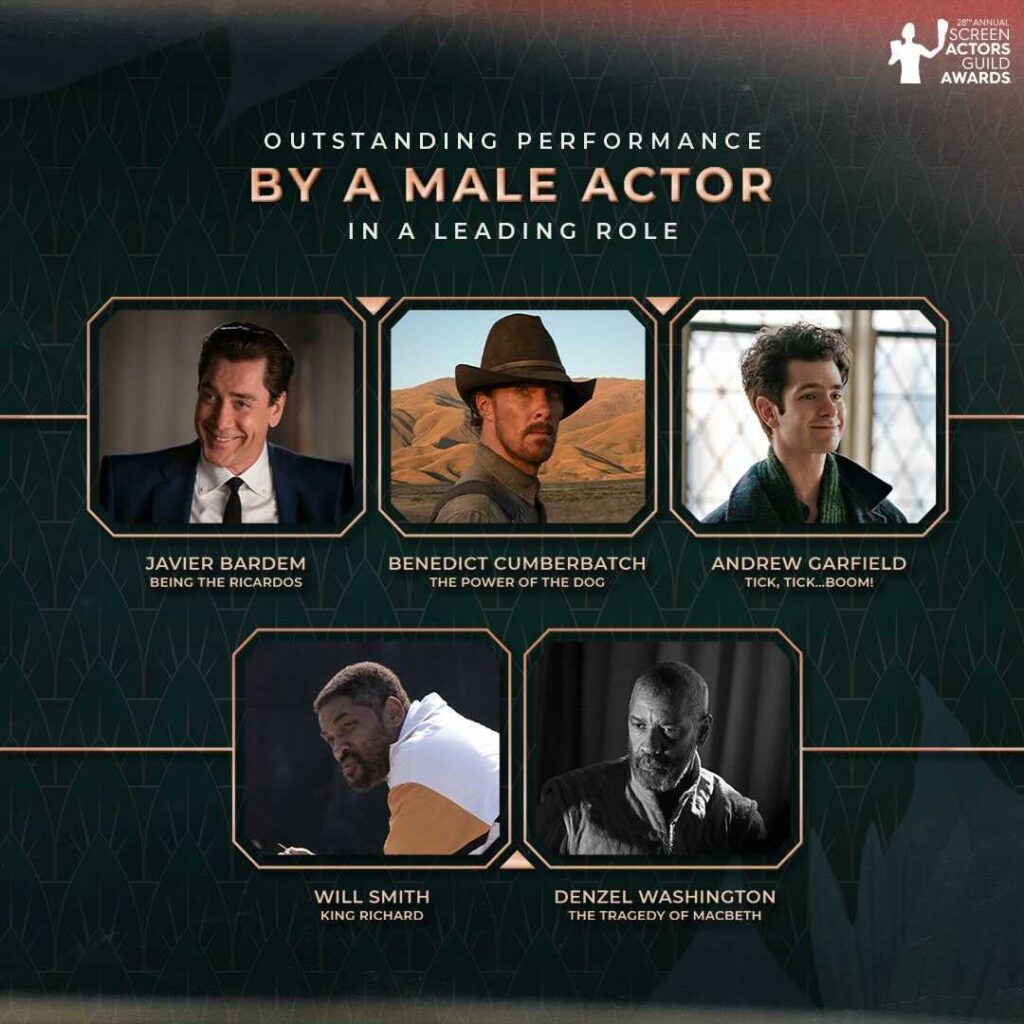 SV1: Will Smith, King Richard: I’ve been following the online hype on blogs and twitter regarding this hyperbole of Will Smith “having this in the bag” and honestly I don’t know where it came from, he’s not the one the Academy members and fellow SAG members have been talking about per my conversations. While he’s good here sure, his co-star Anjanue Ellis out shines him in every scene ( she SHOULD be in Supporting over Balfe if we’re giving DeBose’s spot to Merediz) he’s done much, much better work.

Javier Bardem, Being the Ricardos: Um, sure I guess. Not actively bad and yet not actively good. He’s just “there”.

Andrew Garfield, tick tick… BOOM!: Andrew is one of the two men in this category who voters are talking about over Will, and it’s the better performance by far. Not only does the film resonate with the struggling artist motif that so many SAG members relate to but Garfield is just brilliant in it.

Denzel Washington, The Tragedy of Macbeth:  I didn’t expect to like this performance as much as I did, his and Kathryn Hunter ( who should also be nominated) are sublime. There’s something so fresh that Denzel brings to such old material and I was enamored with him the entire time, his best nomination in years.

Benedict Cumberbatch, The Power of the Dog: Cumberbatch is so good in the film, while better than McPhee but not as great as Dunst he is magnetic. His performance along with Garfield’s are the two getting the most buzz in voting circles.

ANDREW GARFIELD gets my vote. He’s so damn good in the movie and edges out Washington by a mile, despite how great the latter is.

JG: How about Best Actress? 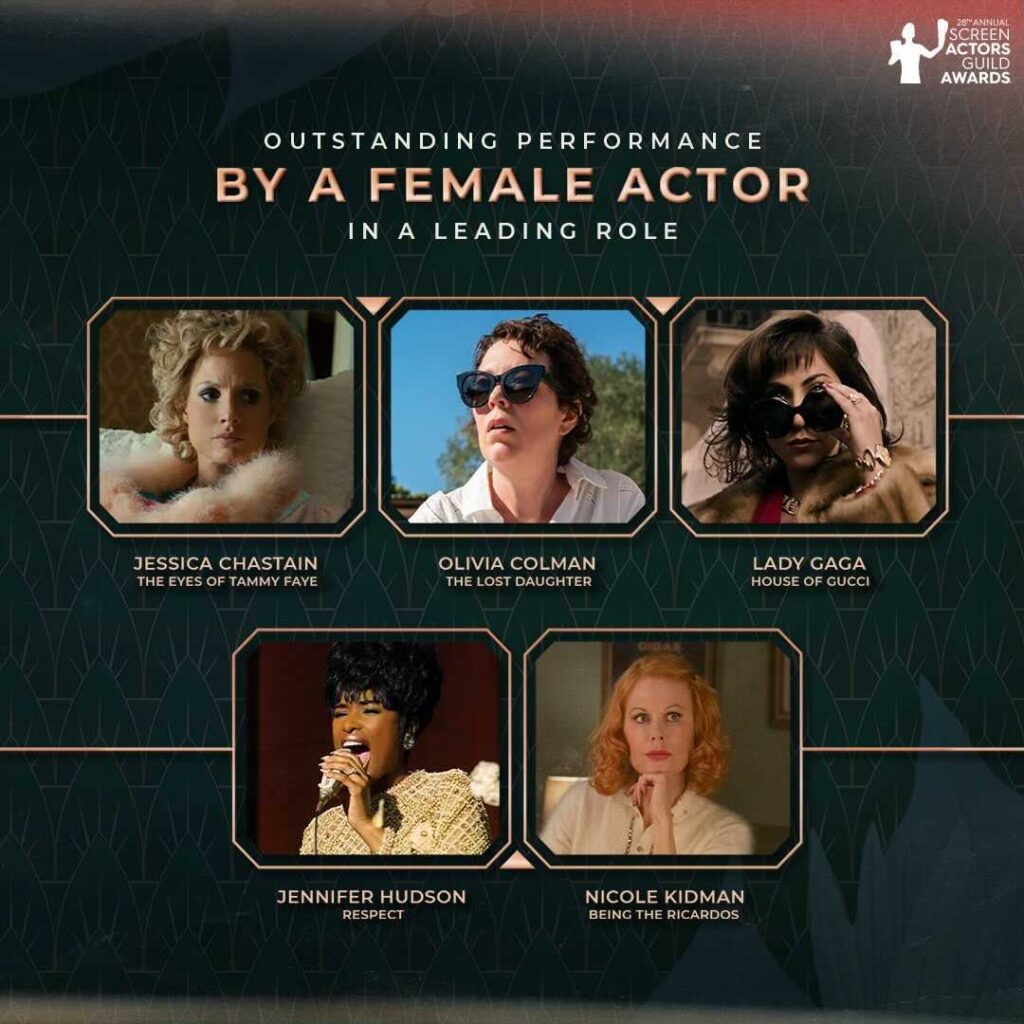 Olivia Colman, The Lost Daughter– Colman is so good in the film which honestly doesn’t offer her much to do and yet here she is doing so much. This is a very quiet performance dialogue wise but is very loud expression wise and I dig it. She should have won last year, and I’m glad she won the Oscar for 2018, but this is a whole new level of Olivia that continues to prove she’s easily the most versatile actress working today.

Nicole Kidman, Being the Ricardos: While not the best she’s ever done this is by far not the worst she’s ever done. This just feels “too safe” in the vein of Zellwegger back in 2019. It’s just “meh”.

Lady Gaga, House of Gucci: While lukewarm on Leto in the film, I am extremely warm to Gaga’s work in this film. She is magnificent and her accent is so so good here. It wouldn’t shock me one bit if she actually wins here, it would be worthy.

Jennifer Hudson, Respect: Not going to lie, I do like this and she is leagues better than Stewart in Spencer so I low key LIVED for the twitter drama this nomination caused. The film is a very by the books biopic and while Hudson is good, like Balfe this isn’t a stretch at all. Hudson won for essentially the same thing back in the mid 00’s.

Jessica Chastain, The Eyes of Tammy Faye: This is CAMP in all the wrong ways. Not only is Chastain hamming it up in every scene she’s in, it’s just too damn much on every level. From the cartoonish accent, to the horrible makeup, it’s larger than life and way larger than even Chastain is able to do. I mean honestly, who is this movie for? What’s the audience? This is made for awards consideration.

OLIVIA COLMAN is getting my vote. She deserves to win in this very mediocre lineup. (Seriously, Alana Haim got snubbed for this?…)

JG: The shade you bring, truly live for it. How about cast? 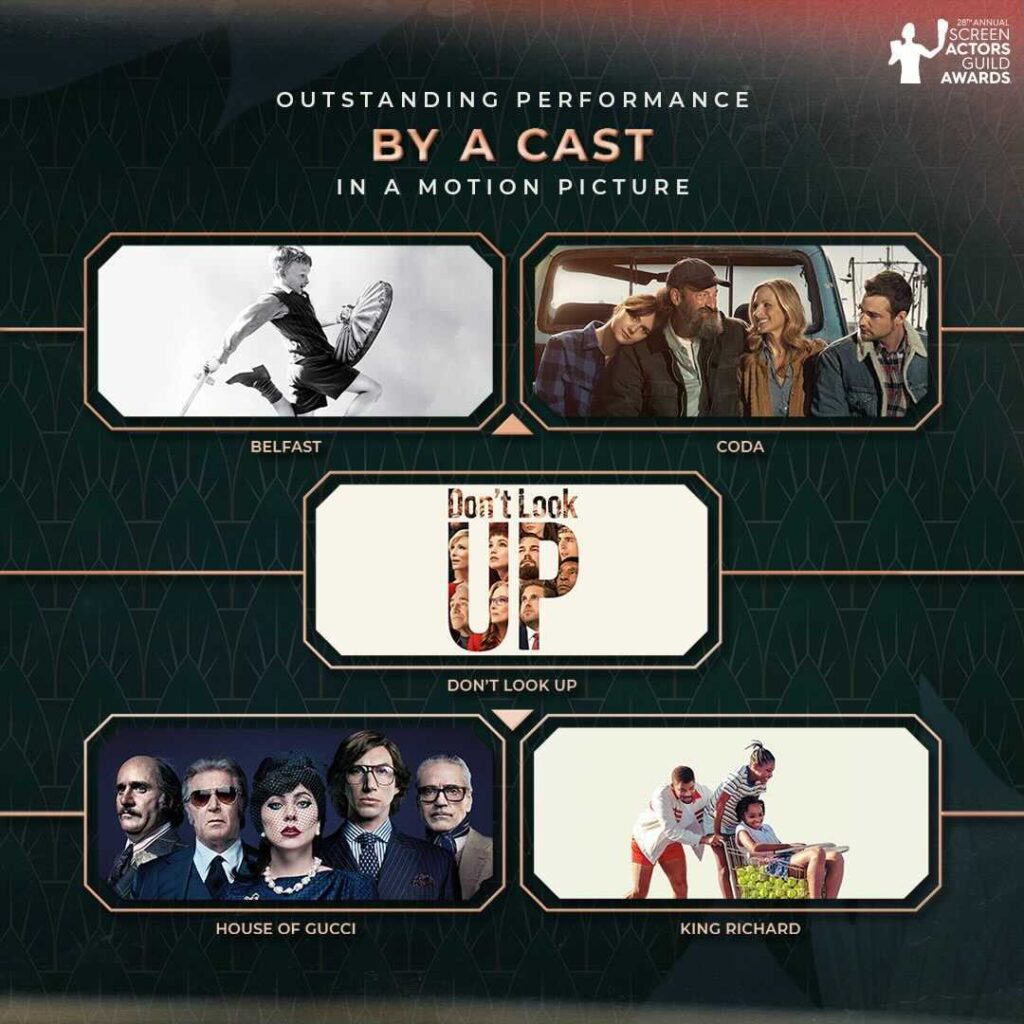 SV1: Yikes. What a mess this category is. I’m going to keep it short and sweet here, HOUSE OF GUCCI is getting my vote, the others are so boring as a whole.

JG: Short and sweet is the name of the game from here on out too, throw me the winners in the rest of the categories for you.

JG: Well this was fun!

SV1: It was! Thanks for having me again.

JG: Absolutely, and can’t wait for next year!

I will be back with more from voters this season!