Chasing the Gold: How Did THAT Get Nominated for Best Picture? (2020) 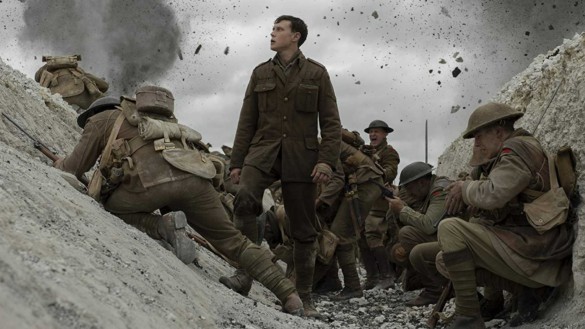 It happens every year. All of us cinephiles look forward to the Oscars the same way most sports fans look forward to the Super Bowl. The Academy Award nominations fill each of us with eager anticipation to see if our favorite films will be nominated for Best Picture. We’ve seen the films, we’ve made predictions after following awards’ season, we’ve argued hotly on Twitter. Now- it’s the moment of truth. Usually- we have been correct in our predictions of what is nominated. What I enjoy most, though, is the outrage we feel when a movie we absolutely love has been snubbed, when at least one, far unworthier film has made the cut. This series will look at that one undeserving film of each year. The film that for that year, and several years after, has film lovers thinking, “On what planet was this movie nominated?” I will present the WORST nominee of each year, and present, in its place, a film I feel is far more deserving of a Best Picture nomination.

The year is 2020. There is a global pandemic. It’s an election year. Civil unrest burns across our country. In entertainment, we lose Max Von Sydow, Carl Reiner, Jerry Stiller, and Olivia DeHavilland.  To say this year can best be described as bleak is an understatement. However, there is one brief, bright, glorious moment that unites all of film twitter and gives us hope.  That moment is at the 2020 Academy Awards when Parasite becomes the first foreign-language film to win Best Picture. The films of 2019 gave us other cinematic gifts as well, including films from master film-makers such as Martin Scorsese and Quentin Tarantino. Greta Gerwig reimagined and breathed new life into Little Women. On a more personal note, Joker becomes the first movie based on comic books that I actually enjoy. The nominees for Best Picture this past year are almost an embarrassment of riches.

There is one film that was nominated, however, that did not deserve the multitude of accolades it received. I am sure many of you are assuming that I am speaking of Joker, but I am not. The movie that did not deserve to be nominated was Sam Mendes’s World War One film, 1917. 1917 is a story of a soldier who is tasked with delivering a message.  On his way to delivering the message, mayhem ensues.  1917 was a frontrunner up until the night of the ceremony. Everyone knew the best film of the year was Parasite but assumed that, like Roma the previous year, it had no chance of winning, as no foreign-language film has ever won Best Picture. Sam Mendes swept the Best Director category throughout awards season, and by Oscar night, his win, as well as 1917 for Best Picture, seemed inevitable. Not only is it not even close to being in the top 10 films that deal with war, it definitely did not deserve its Best Picture nomination.

There are several films about war that have won Best Picture. All Quiet on the Western Front, The Best Years of Our Lives, Lawrence of Arabia, and The Bridge Over the River Kwai all present a look at the psychological effects of war. These classics go far beyond the technical skills of the film-makers.  All provides a new and fresh perspective. They also have complex characters changing throughout the film. All Quiet on the Western Front remains profoundly moving, even though it’s one of the earliest Best Picture winners. The film begins with young men filled with high patriotism and idealism. This idealism becomes shattered upon experiencing the horrors of trench warfare. The Best Years of Our Lives shows the devastation and depression that occurs when trying to return to “normal life” upon returning home when the war is over.  The David Lean films (Bridge on the River Kwai and Lawrence of Arabia) give us two of the most significant, most nuanced characters in film history.  TE Lawrence, a brash scholar who unites Arab tribes to defeat the Turks during World War One.  We see him change from an ambitious soldier to a bloodthirsty warrior. The Bridge Over the River Kwai gives us Col. Nicholson, the perfect model of how a British Officer should be.  Yet, throughout the film, he starts completely losing his vision of what his original mission and enemy should be. The last ten minutes of that film, where he realizes what he has become, in addition to the tension built up by master film-maker Sir David Lean, one of the greatest and most satisfying endings in all film history.  All of the films present a unique vision of war. Each of these films deserved the title of Best Picture.

I love Sam Mendes. I’m one of the few people who will still admit to loving American Beauty. I saw his production of Cabaret on Broadway, and it blew my mind.  Mendes deserved every accolade for both. These works are technical perfection but also cut to the core of the soul.  They have interesting, well developed, and incredibly flawed characters. In addition, they had original stories and plot development. 1917, however, can best be described as a mediocre war film. Yes, Roger Deakins worked his usual magic with cinematography, and all of the battles were very realistic. The idea to make the film appear like one, long tracking shot added a level of depth that allows audiences to feel that they are on the journey with the main character. This film deserved the technical achievement awards it received. George McKay did an adequate job as the soldier sent on a difficult mission.  Sadly, we know very little about his character, and the film does not allow him to grow or change in any significant ways. He spends most of the film running with his gun and trying not to get killed. I was shocked that there are people that felt he deserved a Best Actor nomination.  This is the year that Robert DeNiro paired up again with Martin Scorsese in The Irishman, gave a performance of a tormented man, and HE wasn’t nominated. As stated before, McKay has a great deal of talent, as seen in his other films (especially Captian Fantastic), but in this, he seems more focused on hitting his marks to make the shot, rather than giving his character any, well, characteristics. But, the worst crime of this film is it contains every single war trope seen in all war films. Battle scenes where things get blown up? Check. The main character going on some “impossible mission”? Check. A scene where a character we’ve come to know and love (usually one that provides comic relief) dies and gives his buddy a letter to send home to mom? Check. This film adds absolutely nothing new to the genre of war films. If you are craving for a movie about war, please check out other Academy Award Best Picture films that I have previously mentioned.

One film that was unlike any other movie made last year, that deserved a nomination for Best Picture, is the Safdie Brothers’ fast-paced Uncut Gems. At first glance, the film doesn’t seem complicated. New York jeweler Howard Ratner (an excellent performance by Adam Sandler) is relying on an uncut opal from Ethiopia to be the solution to all of his problems. He plans to sell it at auction for a sum he believes is already agreed on. However, to win favor with a basketball star (Kevin Garnett doing an excellent job playing himself), he lends the treasure to the athlete, who feels an immediate connection with it upon holding it. For the next 2 hours and 15 minutes, this rock is passed from character to character, each needing it to complete his life.  Throughout the film, Ratner is continuously on the go, ravaged by desperation. He is a degenerate gambler that constantly needs the adrenalin rush of winning. He takes the money he wins that he should be using to pay his debt to a set of gangsters, and rather than paying his debts; he uses the winnings to place higher and higher bets. Tension builds from the opening shot, and the rest of the film literally makes you feel like you are having an anxiety attack. There is a frenetic pacing in this film that I have never experienced.  Uncut Gems is unlike any movie I’ve ever seen before, and more people definitely need to see it. It’s an ugly look at the horror of gambling addiction. These factors contribute to why Uncut Gems deserved a Best Picture nomination over the safe and traditional 1917.