Chasing the Gold: How Did That Get Nominated for Best Picture? (2018) 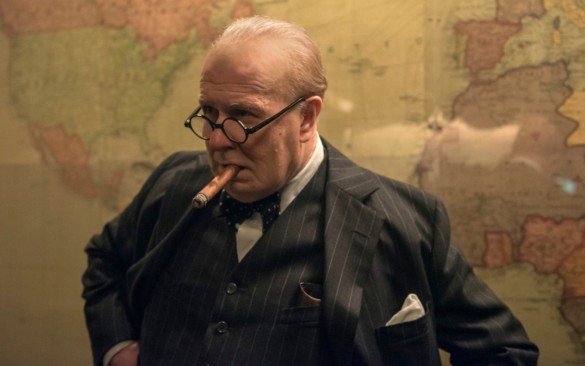 The Academy Awards of 2018 deemed The Shape of Water the Best Picture of the year.  Yes, a fantasy about a woman having a love affair with a sea creature was able to nab the top prize over two other films that I believed were the two frontrunners, Three Billboards Outside Ebbing Missouri and Lady Bird. It also beat out the beautifully moving Call Me by Your Name and the horror/social commentary film Get Out. All of these films received awards on Oscar night (the exception being my beloved Lady Bird, which still stings a bit), and it stands out as a great year for film. I admit, for this article, I had a very hard time decided on what the least deserving film was for the year. After watching Dunkirk and Darkest Hour several times each, I have decided that Darkest Hour earns the title.

Joe Wright’s Darkest Hour chronicles the first days of Winston Churchill’s rise to Prime Minister, how he rallied his country to want to fight Hitler and has to solve the problem of rescuing the British military from Dunkirk. Gary Oldman finally won a Best Actor Oscar, for his portrayal as the iconic Winston Churchill. He did an adequate job playing Churchill, showing him to be somewhat of a gruff teddy bear. He meets his new assistant, and barks at her for making mistakes, driving her to tears, only to become more friendly with her throughout the film. We see him rant and rave against political opponents, and then giggle like a schoolboy when he learns he’s been making the “V” with his fingers backward, giving it an obscene meaning. Personally, I understand why Oldman won, most people see the win as overdue, but I would have been more satisfied with a Timothee Chalamet win for Call Me by Your Name.

The film gives insight into a very specific time period. It begins with Churchill taking over the Prime Minister position after England lost faith in the Nazi appeaser Neville Chamberlain, and shows Churchill overseeing the Dunkirk situation. While I understand that dramatic and creative licenses are allowed when making a film, one thing that weakens the power of a historical film is when the film-maker puts in a scene to tug at the heartstrings. The scene that weakens Darkest Hour was a major moment in the film. At the start of the film, Churchill looks out the window of his car, lamenting to the driver that he has never ridden the “tube.” He admits that he was born to great privilege and has essentially never been among “commoners.” Churchill was one of the most inspirational leaders and orators of modern history.  One doesn’t need to shoehorn false stories about Churchill riding the subway and mingling with the “commoners” and asking their opinions of matters of state. Honestly, I don’t think I have ever rolled my eyes more, nor cringed so hard during a scene in my life. The scene is so absurd, I did actually go online to see if it had actually happened, and was not shocked when I read that it hadn’t. This false scene is a pivotal moment in the film. It is the scene that causes Churchill to get fired up and give that moving speech about how England WILL fight the Nazis. Winston Churchill was a larger than life historical figure.  Nothing about his leadership during World War II needs embellishment.

Unfortunately for Darkest Hour, the superior Dunkirk came out the same year. Dunkirk was a well-made film that really made me understand just how dire the entire situation was. It opened my eyes to the horrors of what those troops went through. Darkest Hour seemed like it was made to win awards. It is part biopic and part World War II film. If there is one thing filmgoers and the Academy loves, it is biopics and reminders of how amazing the Allies were during World War II. Without that “pivotal” scene, the film would have been far more effective.

I’m truly torn with what picture SHOULD have gotten a Best Picture nomination over Darkest Hour. Coco is an incredible film, that moves me emotionally more with each viewing. The story, the animation style, the colors, the look at family, and the wonderful music never fails to make me cry and miss my own relatives, especially ones that have passed. However, because it did receive recognition as Best Animated Film (and Best Song for the lovely “Remember Me”), I will give the nomination to a film that I feel deserves much more recognition than it received, I, Tonya.

I, Tonya retells the story of Tonya Harding, her rise to a top figure skater in the country, to her downfall with the attack on competitor Nancy Kerrigan. Now, I was a pre-teen when the attack on Nancy Kerrigan occurred.  I remember following the story in the news. You couldn’t turn on the television without hearing about it. I remember how the media had always portrayed Nancy Kerrigan as a princess. She wore Vera Wang skating costumes, was beautiful, and has a blind mother who couldn’t see her skate, but was always there in the audience to support her daughter. It was so lovely and tragic. Tonya Harding was shown as being trashy.  She wasn’t lithe and delicate. Her makeup was garish, and her family was low-class. All of these things are portrayed to perfection in the film. Margot Robbie, who before I really had only seen her in Wolf of Wall Street, was stunning. I had no idea of the depths of her talent until I, Tonya. This is not an example of “deglamorization” of a beauty to win an award. This isn’t Grace Kelly in The Country Girl. If I hadn’t heard her speak in public, I’m pretty sure I wouldn’t realize she isn’t actually American.

I knew within ten minutes of the start of the film, when Allison Janney makes her first appearance on camera, that she was going to win an Oscar for Best Supporting actress. She is a villain in the story, but the kind that lives in the real world. She and Robbie are incredible, playing unlikeable and unsympathetic characters, yet make you listen and understand the motivations behind what they do. The film is set up like a documentary, with interviews of Harding’s ex-husband, her skating coach, and members of the media who reported on the event. While you see and hear the perspectives of this wild group of characters, it remains Harding’s story.

We see Harding struggle in her life from the constant abuse she faced from her mother and her husband. You feel for her when she is treated like a joke by the skating community. You feel her elation when she becomes the first female skater to succeed in a triple axel.  Speaking of that scene, which highlights a major moment not only in the sport of figure skating but in Harding’s life, is brilliantly filmed.  The editing in this film is some of the best I have ever seen. It cuts to several people explaining what a triple axel is, intercut with a slow-motion clip of Harding completing the move.  It’s so well shot and edited.

There is also not enough attention paid to Sebastian Stan and Paul Walter Hauser, who plays Tonya’s ex-husband and bodyguard.  These two had me crying laughter tears as they planned and plotted the attack on Nancy Kerrigan, and how they allowed everything to fall apart in the aftermath.  Yet, as funny as this film is, it also hits home how tragic the entire course of events were. Tonya Harding literally lost everything she had worked for her entire life by getting involved with these two men. And Margot Robbie reminds us of that throughout the film. I, Tonya is wildly entertaining and well made. With nominations in Best Actress, Best Film Editing, and a Best Supporting Actress win, this film absolutely should have received a Best Picture nomination over Darkest Hour.