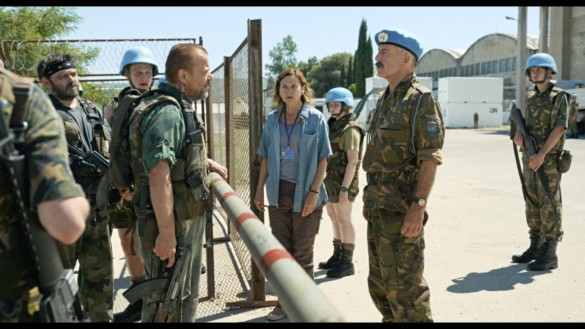 The Oscar nominations are just around the corner and as bizarre and chaotic as this awards season has been across multiple leading categories. The Academy’s shortlists provide a glimpse of what to expect comes nomination morning, albeit in mostly below-the-line categories. However, we do have a shortlist of the fifteen selected films submitted by their countries for International Feature Film. Out of those fifteen amazing pictures, Bosnia and Herzegovina’s submission “Quo Vadis, Aida?” has by far affected me the most. And as far as I am concerned it deserves the win, let alone the nomination.

Written and directed by Jasmila Žbanić, the film follows the story of Aida (Jasna Đuričić), a UN translator caught and her family along with thousands of other people in the middle of the attack of the Serbian army on Srebrenica in 1995. And as the situation escalates to a boiling degree, Aida is left trying to balance her role as a UN translator and provide protection for her family.

Quo Vadis, Aida is based on the actual events of the Srebrenica massacre. While Aida is a fictional character compiled from testimonies of witnesses to the massacre, the pillars of the film’s plot stand unchanged, and with some research, footage of some of the events depicted in the film can be found on YouTube, Which is one of the reasons the film has filled me with rage and depression after its ending, because not only did I not know enough about the Srebrenica massacre, it seems I am not the only one on this boat.

Jasmila Žbanić writing and directing emphasizes the human element in the impossible circumstances that her characters are put through. Combined with floating cinematography and precise editing to further underline the already astronomically tense situation, she puts the viewer in a conflicting vein of emotions. The film’s technical mastery invites you in and glues your eye to the screen only to tell you one of the most heartbreaking stories you will ever see.

Filled with terrific performances Quo Vadis, Aida finds its heart and soul in Jasna Đuričić’s unsettling depiction of a mother doing everything she can to save her family. Đuričić’s ability to convey the hopelessness and anguish of the situation speaks volumes louder than any line said in the film, and to witness her put up the facade to reassure her family nearly brought me to tears. And as the film leads to its final turn, the amount of despair that radiates from her tells you everything you need to know about what’s coming.

Despite its tension-based narrative, Quo Vadis, Aida has a very sad and sorrowful heart. The film manages to have a few moments where it slows down and leaves you with a character nostalgic memory of peace and harmony on the dance floor or focuses on the minor flirtations in a room full of people. For me, these moments are what ground the film to its emotional core and, in the end, makes the film one of the most Gut-wrenching experiences I have ever seen.

The film has an utterly insane spiral of events that left me shouting at the screen; how did the world let that happen, and most importantly, how did it forget thousands of lives lost under the fake umbrella of UN help. With a state of a world looking for something new every day, people have grown a costume to forget their past, so it’s necessary to have a film that reminds the world of what it did and says you let that happen, don’t forget cause we won’t.

Quo Vadis, Aida represents how the highest level of cinema can affect the viewer; sometimes it challenges their beliefs, other times it changes their behavior, but it will always open their eyes to something new in the world. In the case of Quo Vadis, Aida, this happens by showing the world the truth that it chose to ignore back in 1995; and is choosing to ignore now. I think that Bosnia and Herzegovina’s submission to International Feature Film is not only a masterful work of filmmaking, but it is also a masterful work of historical significance. And if this isn’t enough to earn it at least an Academy nomination, I don’t know what will.