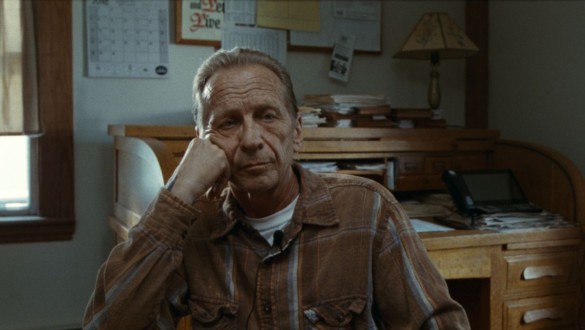 When it played at film festivals this fall, Darius Marder’s directorial debut Sound of Metal received raves for its sound design, direction, script, and especially the lead performance from Riz Ahmed. Another aspect that received acclaim–albeit perhaps not quite as much–is the supporting performance from Paul Raci. While all of the aforementioned pieces of the film deserve every bit of praise they receive, especially Ahmed, I think Raci’s turn is one of the most impressive and memorable treats from the film. This is more clear after revisiting his performance after the film dropped on Amazon Prime Video this week.

When we are first introduced to Raci’s character in the film, he delivers a much needed warm presence. After Ahmed’s character Ruben begins to lose his hearing, Raci’s Joe is the one that Ruben’s girlfriend (another solid performance in the film, courtesy of Oliva Cooke) recommends he turn to. Joe is the leader of a program for members of the Deaf community. He believes that the goal is not to “correct” Deafness, but to condition the mind to treat Deafness as a part of life, rather than a shortcoming. He informs Ruben that he is looking for a solution to the thoughts Ruben is having about losing his hearing, rather than fixing his hearing itself. As a result, he provides Ruben with the opportunity for finding joy and acceptance with this sudden change to this livelihood.

With a role such as this, Raci could have come off as the over-excited mentor that serves as more of an annoyance than a helper. But Raci’s demeanor indicates that he knows the struggle. Joe certainly has his opinions as a member of the Deaf community, and his presence is an invitation to discover the possibilities within the community while also laying down the ground rules. He comes in and out of the movie with a caring look as a guiding symbol of hope and love, without taking over the movie completely.

But Raci’s best moment in the film does not come with these earlier scenes. Rather, it arrives near the end of the film, when Ruben breaks news to him that he does not wish to hear. When watching this moment, I couldn’t help but think that this turn in the plot could have resulted in an over-the-top monologue from Raci about why he thinks Ruben is making the wrong choice. And it’s totally refreshing that the film avoids this. Granted, part of this is due to the smart screenplay from Darius Marder, Abraham Marder, and Derek Cianfrance. But Raci knows how to perfectly portray every emotion with his face. The heartbroken and disappointed look he provides in this moment is one that has been seared in my memory since I first saw the film in October. Though he does provide a lengthy vocal response, he doesn’t really need to say much at all. Everything that needs to be relayed is provided through the emotional non-verbal display. And the fact that he ultimately accepts the news is consistent with the character.

It’s become clear over the early period of awards season that the Oscar race for Best Supporting Actor is both competitive and wide open. Much of the conversation has been dominated by Chadwick Boseman in Da 5 Bloods, and the ensemble casts of The Trial of the Chicago 7 and One Night in Miami…And though these are all great performances, I think there is plenty of room for the soulful, character-driven work from Raci. Not only is this the best supporting actor performance I’ve seen so far this year, but it’s also the only one to leave a real imprint months later. Not to mention that with category fraud being a hot topic with the Oscars year in and year out, this is a performance that is undeniably supporting, in terms of both screen time and how the performance impacts the story and lead character.

And although I’m not one to give much consideration to external aspects when it comes to awards, Raci has a pretty solid narrative for consideration outside of his role in Sound of Metal. For example, Raci is not a household name in the film industry (he doesn’t even have a Wikipedia page) so this would be an opportunity to reward an fairly unknown actor for his work, rather than his status. Raci also learned American Sign Language (ASL) long before he landed the role in the film, due to growing up with Deaf parents. Most of his acting career stems from bit parts in television, as well as stage productions performed in ASL. He is also an ASL rock musician (1). All in all, this is a case of a true advocate for the Deaf community appearing in a film centered on that very topic.

Paul Raci may not be heavily in the running for Oscar glory in Best Supporting Actor right now, but with the extended eligibility period and Sound of Metal now available to stream, there is plenty of time for his performance to be seen and recognized for the astounding work that it is. Sound of Metal is chalk full of emotional moments that are sure to resonate with plenty of people. For me, most of those moments came about when Raci appeared on the screen as a guiding light and a truly sympathetic character. And that’s the sign of a wonderful supporting turn.

1. Phillips, Michael. “Paul Raci grew up in Chicago, the hearing son of deaf parents. For Amazon’s ‘Sound of Metal,’ his course was clear: No acting allowed.” GazetteXtra. December 1, 2020. https://www.gazettextra.com/entertainment/paul-raci-grew-up-in-chicago-the-hearing-son-of-deaf-parents-for-amazons-sound/article_9e2aa41e-8b04-5a69-a8ba-a658020b672b.html.