Chasing the Gold FYC: Mads Mikkelsen, Best Actor – ‘Another Round’ 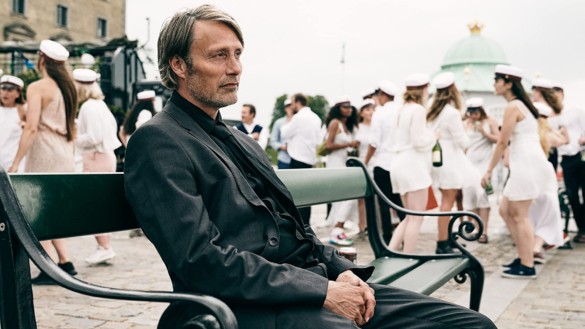 We have just come off a year when international films were finally accepted outside of their own category this awards season. Not only were people talking about the likes of Portrait of a Lady on Fire and Pain & Glory as some of their favorite films of the year, with the latter getting a Best Actor nomination for Antonio Banderas, but Parasite ended up being the big winner come Oscar night, taking away International Picture, Director and Picture.

While 2020 has been a year in which foreign cinema could not make the impact that it usually does at the likes of the Cannes Film Festival, there have been some great films from across the world. I got to cover a few of them at the London Film Festival this year, and it turns out that one of these major contenders ended up being my favorite film out of the festival. That is Thomas Vinterberg’s Another Round, Denmark’s submission for Best International Picture for the 2021 Academy Awards.

This post is not an FYC for that film, as I feel enough people are already talking about it for that category. With major films such as New Order and The Life Ahead already out of the running, the pathway for Another Round (a film with a notable director and star) to get the Oscar is becoming easier by the day. Instead, I want to promote it in a category that I do not see people discussing it for, but is worthy of regardless. I want to put out an FYC for Mads Mikkelsen to be nominated for Best Actor.

I know pushing anyone else in the Best Actor category right now is incredibly tough, considering the competition. Firstly, it is undeniable that there are already two frontrunners in Chadwick Boseman for Ma Rainey’s Black Bottom and Anthony Hopkins for The Father. We also have some of Hollywood’s finest coming back for another round (pun not intended) of the Oscars, with Tom Hanks and Gary Oldman both in the thick of things for News of the World and Mank, respectively. This is also the year of fresh faces, with Riz Ahmed, Kingsley Ben-Adir, and Steven Yeun all looking to try and grab their first Oscar nominations. There are still some films that are sight unseen and could make a surprise last-minute push, such as Lakeith Stanfield for Judas and the Black Messiah.

So, why should I even bother wasting my time writing this to push for Mads Mikkelsen to get this nomination in such a crowded year? Well, I think there are a few things going for him. Firstly, he seems to have a lot of the qualities that I mentioned above which is helping the others get consideration for their nominations. He has never been nominated for an Oscar, so there could be a campaign that focuses on the push of getting him some recognition. However, he has been putting in the work in this industry for many years now and is not a newcomer. He already has the respect of many within Hollywood and therefore it could be easier to get him into the list, as opposed to the fresh faces of Steven Yeun and Kingsley Ben-Adir.

Secondly, the past few years have shown that where there is a strong lead in a foreign language film, the Academy is willing to recognize it. The reason that did not happen last year with Parasite was that there was not a single strong leading performance, that film was driven by the entire ensemble. Instead, Pedro Almodóvar’s Pain & Glory was the film that got that push, with Banderas getting that Lead Actor performance. We also have to remember that only the year before, Alfonso Cuarón got two performances in the race for his film Roma, Yalitza Aparicio in Lead Actress and Marina de Tavira in Supporting Actress (a nomination very few people saw coming).

Both of those aspects would not matter if the performance was bad or the film was disappointing. That is not the case though, as Another Round remains as one of my top films of the year. This may be a film about the consumption of alcohol, but the story goes way beyond that intriguing plot premise. The story touches on the side effects of not being sober, the impact it has on physical and mental health as well as the issues that come alongside that with relationships and career prospects. Mikkelsen has to give a dramatic performance that is of the Academy’s liking but not to the point of melodramatic. It is hard not to become invested in his performance, from the highs to the lows of his character’s situation and the different emotions he has to tackle. It really is a wonderful performance, and unlike any other that I have seen in 2020.

Do I think he is going to get that Best Actor nomination? Well, I think that more people need to see this film and start talking about it. In what is becoming a strange International Picture race, Another Round may be the only lock of the category so far. The campaign is only really kicking in for this film, as it takes its Audience Award win from the London Film Festival and starts to run a limited release in the US, as well as screeners for the European Film Awards – in which it is the favorite to win. If more people seek this film out and start to create buzz for more than just International Feature, there is a shot that Mads Mikkelsen will be dragged along with the conversation. I am simply here to try and start that conversation before it is too late.