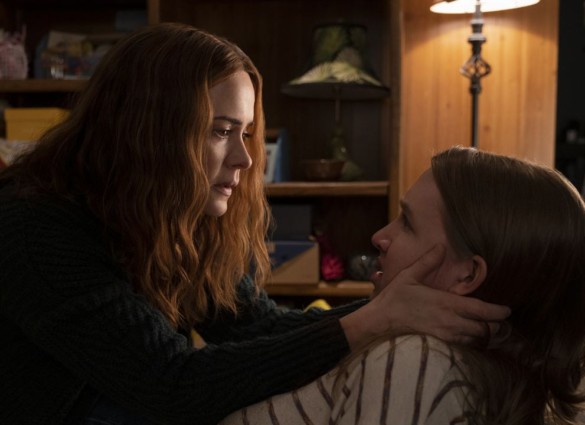 Synopsis: A homeschooled teenager begins to suspect her mother is keeping a dark secret from her.

Though we have not been able to spend much time in movie theaters since March, there are a number of films this year that make us wish we could have viewed them in that setting. One of the latest films to create that feeling for me is Run, the new horror thriller from Searching director Aneesh Chaganty. The film dropped on Hulu in November and makes for an intense viewing experience that left me craving for a theatrical experience where I could see the reactions of viewers as each major plot point occurs.

Though I wasn’t able to do that, the film still serves its purpose when watching at home. It begins in a maternity ward, just after Diane Sherman (Sarah Paulson) has given birth to her daughter. After the doctors operate on the prematurely born infant, Diane is allowed to visit her baby. She asks if the child is going to be okay, though the screen cuts to black before we learn the answer. We are then shown descriptions of five medical conditions: arrhythmia, hemochromatosis, asthma, diabetes, and paralysis. It’s a stunning introduction that is likely to leave the audience both intrigued and incomplete mystery over where the film is heading.

17 years into the future, we are introduced to Diane’s homeschooled daughter Chloe (Kiera Allen), who has the aforementioned conditions and high hopes of getting into the University of Washington. We see her morning routine, from taking a variety of medications to getting downstairs in her wheelchair, to checking her blood sugar after breakfast. This is accomplished through some operative editing that moves along quickly but keeps the film grounded. Throughout all of these tasks, Diane appears to be a loving, supportive mother.

One day, Diane returns home from a trip to the grocery store. While she goes out for another load, Chloe sifts through the groceries looking for evasive chocolates. She finds a medication that she doesn’t recognize, and though it is prescribed to her mother, Diane gives her a pill that night after stating it is a new heart medication. This makes Chloe extremely suspicious and indicates that Diane may not be the caring mother she appears to be after all.

While this moment is where the plot really takes off, it’s also where one of the problems with the film begins. Though I can appreciate a thriller that knows what it is and doesn’t need a long-running time to get going, I felt that it could have used more time to learn about these characters and their daily interactions. While we gather much about their routine in this brief introduction, there seems to be almost no conflict between them whatsoever. So it feels a little sudden to see Chloe be so suspicious of her mother so quickly. That’s not to say it isn’t justified (it clearly is), but we get the horror beats and suspicious eyes the moment she catches sight of the bottle of pills. It almost feels like the film is trying too hard to be of the horror genre early on.

Perhaps the most damning thing about this is that the film doesn’t need this quick dive into the conflict to let us know it’s clearly a suspenseful drama. What follows is a collection of taut moments that could easily put the viewer on the edge of their seat. Of particular note is a scene in which Chloe must crawl outside of her bedroom window and into another window on the other side of the house to make a daring escape. It’s a thrilling sequence built to leave us without breath for an extended period, much like the lead character. It’s also a testament to the wondrous acting performance from Kiera Allen.

While I’m on the subject, I have to applaud the overall work by Allen. Although we miss out on some much-wanted relationship development between her and Paulson in the beginning, she never fails to generate empathy for her character or create investment in her struggle. Her role in this film is also a stride in representation for actors and characters with disabilities. Allen uses a wheelchair in real life, and it’s important to see this type of casting for a character who also uses a wheelchair. And she nails this performance on a personal and emotional level throughout the chaos of the film.

Paulson is also quite engaging here, and this is a role that feels perfect for her. We know that she can play the creepy role from her previous work, and here she really captures the horrifying nature of a mother who will do anything to ensure that her daughter needs her. Without spoiling too much, let’s just say that Diane has taken some drastic measures to maintain the position she has with her daughter. There are some major twists that come about in the film. Many of them may be fairly predictable, but the real strength is not in the reveals themselves, but how they develop in connection to the larger narrative and relationship.

To provide a bit of positionality, I do not personally have four of the medical conditions detailed in the film. But I am a type one diabetic, so I can speak to a degree about the representation of life with diabetes in the film. I don’t see diabetes portrayed in movies very often, and I have to say that I’m rather pleased with most of the portrayal here. My fear is often that diabetes will be treated as completely debilitating, and that the symptoms will be used as a cheap plot device. But most of the depiction here shows the very normal, though unpredictable routine that can come with managing diabetes. Granted, there is a twist that I think cheapens some of that representation, but I won’t spoil it here.

I cannot say with certainty whether Run is a great film when it comes to representing individuals with certain medical conditions, but it does deserve praise for casting Kiera Allen in a lead role. It’s a necessary step, especially for a film in the suspense genre. Narratively, the film does not break any new ground and has some missteps here and there, but the direction from Chaganty ensures that it’s always exciting.