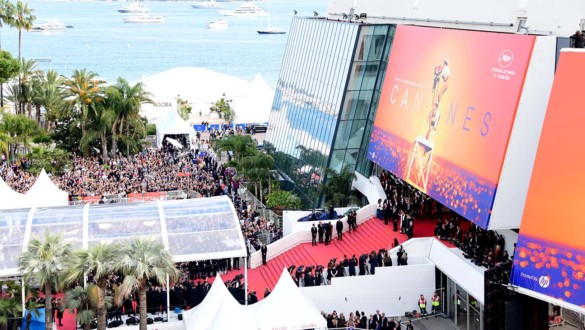 After a tumultuous year in which most film festivals went digital, the Cannes Film Festival refused to “sacrifice” its experience and canceled its 2020 edition. This year, it came back with a bang and a discreet date adjustment. Against all expectations, the 2021 edition took place in July in a seemingly smooth fashion, providing us with a first look at some of the most anticipated films of the year.

While the buzz is focused on films such as Annette, Memoria, Titane, and The French Dispatch, I wanted to bring attention to gems that were shown in the sidebar competitions. These five films are great and consequently, deserve as much anticipation as the biggest titles of the fest. Keep an eye out because you won’t want to miss them once they become available.

Acclaimed actress Sandrine Kiberlain (winner of two César Awards and nominated seven other times) has her directorial debut with A Radiant Girl, a sweet portrait of a Jewish teenager starting her life in the Paris of the 1940s. Nevertheless, as history has proven, her tragic future is already set.

The story could easily be happening in the 40s, 80s, or today, thanks to its neutral costumes, ambivalent production design, and modern soundtrack. Furthermore, it could reflect the life of the filmmaker herself by focusing on Irène (a luminous and enchanting Rebecca Marder), a young woman rehearsing her audition to the conservatory to become an actress. Nevertheless, small clues let us understand the context and the measures that are being introduced as a way of isolating the Jewish community, including her, her grandmother, father, and brother.

The story focuses on the bright days of Irène as she discovers love, spends time with friends and family, and resists to acknowledge what is happening around her. While the film does not present the heartbreak that is bound to happen, the audience is aware of what awaits, as Irène smiles and plans her future, unaware of history.

Sergei Loznits presents a challenging and heart-breaking chronicle of Jewish genocide in Babi Yar. Context. As clearly defined in its name, the documentary focuses on three days in which German and Ukrainian forces killed more than 30,000 Jews in Babi Yar, Ukraine in September of 1941. The film presents the arrival of the Germans months prior, the instant submission of the Soviets, the genocide, and the actions the Soviets established once they recovered control in 1943.

Loznits only offers archival footage of the event, no narrations nor interviews, allowing us to reach our own conclusions about the desolation of the killings, and the moral burden of the Ukrainians that did nothing to prevent this massacre. While its footage is historically invaluable, Babi Yar. Context is an urgent reminder of human callousness and the cruelty that we need to avoid at all costs.

Costa Rican-Swedish filmmaker Nathalie Álvarez Mesén has her directorial debut with Clara Sola, a dreamlike experience about the awakening of a repressed woman. Clara (celebrated dancer Wendy Chinchilla, having her acting debut) is a forty-year-old woman that has always lived overprotected by her mother in a remote town in Costa Rica. According to her family and community, Clara has healing powers given by the Virgin Mary. Her modest existence of healing others and wandering in her garden is challenged when Santiago (Daniel Castañeda Rincón), the new horse carer, appears.

Clara starts experiencing an uncontrolled and explosive awakening. She starts coming out of her shell, violently and sexually. Chinchilla gives an unashamed and almost voiceless performance in which madness and despair come together in an unruly way. Clara is awake now, and she is ready to take control of her life.

La civil presents a story that is too familiar and relevant in Mexico’s landscape: the thousands of cases of disappeared people, and the despair experienced by their family. The film centers on Cielo (Arcelia Ramírez), a mother that starts a decisive and ruthless search for her kidnapped daughter in an unnamed town of Mexico. Ignored by authorities, Cielo takes matters into her own hands and tracks down the prime suspect, leading her to a path of violence and danger that cannot be erased.

Sometimes a thriller, and always a harrowing drama, La civil is painful to watch because it perfectly captures the disenchantment of living in Mexico: a place where everyone avoids responsibility, justice is not found, and citizens are left alone in the environment of crime. Ramírez gives a passionate performance, while debuting filmmaker Teodora Mihai immerses the audience in a heart-breaking story that is, unfortunately, based on real events.

Brazilian filmmaker Anita Rocha Da Silveira presents an incendiary provocation on patriarchy with Medusa, a film that is so clear and loud on its criticism of Brazilian society that it is impossible to remain impassive to its message. The story follows a group of girls that are traditionalist and auto-defined protectors of the local feminine values and expectations. At night, they go out to beat and punish those women that dare to do something that may threaten their reputation.

Her obsession towards a berated and abused actress that has become a local legend leads Mariana (Mari Oliveira) to work as a carer in a hospital. Nevertheless, this job will lead her to start discovering a different world and her own desires, leading her to the realization that her past behavior may be mistaken. This peculiar coming-of-age story comes to life through questionable and unsympathetic characters but offers a struggle that is identifiable and asphyxiating because of its patriarchal values. Da Silveira offers a visually captivating and stylish reflection on the price of comfort and the shattering process of understanding.