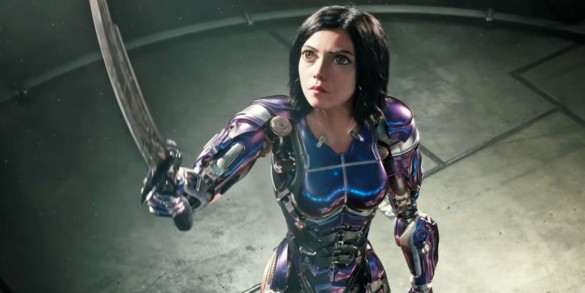 Every two weeks, I will be working my way back through each year and watching a major blindspot of mine. As long as they are not sequels, any film is on the table to be a blindspot. I will be aiming for the most recognizable films that I haven’t seen, whether they were box office successes, Oscar contenders, or just garnered a huge fan base. This post will talk about how I missed the film, and what my thoughts are now, linked to the love for the film and looking back on the year as a whole.

For the year 2019, my blindspot is Alita: Battle Angel.

2019 is an interesting year in which I saw most of the major Oscar contenders and box office hits. When trying to decide on my blindspot for 2019, I wanted to pick something that had a lot of passion behind it, something that people may want my opinion on. That was when I found Alita: Battle Angel and knew that this would be a great way to open up this series.

The film, whilst doing well enough at the box office, was not the success that the studios were hoping for from director James Cameron, only making 400 million dollars in the worldwide box office. It was also not a critical success, failing to even receive a Best Visual Effects nomination at the Oscars after making it to the second round of the shortlist.

However, none of that seems to matter as the film has still inspired a lot of passion. Whenever you tweet anything online about Alita: Battle Angel, the fans will find it and respond to it. Despite the poor box office ratings, many fans are still petitioning to this day for a sequel that was planned, and I commend the fans for being as passionate as they are.

With these conflicting views and opinions on the film, I was intrigued to see where I would land with this film. For the most part, I am glad to say that I had a good time with it. This is mostly due to the performance of Alita by Rosa Salazar, as well as the huge ensemble cast within the film. When you have a cast as known as Christoph Waltz, Mahershala Ali, Jennifer Connelly and Ed Skrein, you know you are in for a good time and all of these actors are having so much fun in their roles.

The world-building in this film is spectacular, and the visual effects help bring the audience into this Cyberpunk experience, setting high expectations with the opening scenes of Alita and her robotic limbs. I had a lot of fun with the action sequences, and that doesn’t just stop with the fantastic fight sequences. The fictional sport of Motorball is brought to life through these thrilling moments and develop throughout the story, starting out on the streets and, later on, immerses us in the arena.

Our leading character Alita goes through a lot of development throughout this story, and it is engaging to watch. I also like that Christoph Waltz’s character, Dr. Dyson Ido, has his one storyline to go through and to learn throughout the story, as it does add weight to the relationship between him and Alita. I do wish the other characters had more development, because the other relationships are simply not as impactful throughout.

The major problem with this film is the fact that it will most likely not receive a sequel. This is a strong opening film for a franchise, but by itself, it does feel like a shell. We have these great characters, particularly Alita, and a world that I want to explore as much as I can. However, the film ends with the story only feeling like it is beginning. So much time is spent setting up this huge world and giving us context for everything likely to come. Judging it as a solo film, there is a lot of potential here that does feel wasted, especially with the vague ending that we do get for this story.

I really do understand why fans want a sequel and to see more of Alita and this world. Whilst I would not say I love this film as much as the passionate fans did, there is so much more to offer and many stories to tell. This certainly wouldn’t have been a favorite film of mine in 2019 or one that I would rush to revisit, but I am glad to have finally watched it and understand why a call for a sequel has been made from fans. Alita Army, I am with you on this one.