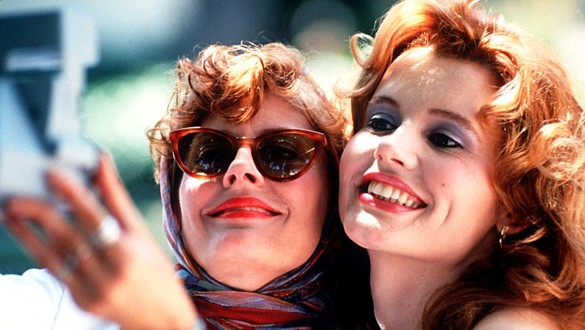 Synopsis: Two best friends go on an adventure to escape their lives, which soon turns into a terrifying chase from authorities

A lot has happened in the 30 years since Thelma & Louise was released to audiences in 1991. The poignant quote of Louise telling her friend, “we don’t live in that kind of world, Thelma” as a retort to Thelma’s hopes of the authorities believing their situation; mirrors our current society of the “believe all women” mantra that has escalated the MeToo Movement. A sign of how far our world has come and how far we still must go.

This modern take on the traditional machismo westerns of old tells the story of our two titular female characters, Thelma and Louise. The two women are down on their luck — unsatisfied with the simplicities of life, or should I say the social norms that are so often pinned on women. Thelma (Geena Davis) is a homemaker with a domineering husband whose personality comes off as more of a strict father rather than a husband. He’s unforgiving to her desire to go out and have some fun every now and again. Louise (Susan Sarandon) is the more logical one, but hides a deep-seeded secret within her that eventually plays a role in the duo’s journey. One event leads to another as the ladies find themselves running from the authorities as their goal to make it across the border of Mexico becomes more elusive.

Many names floated around the rumor mill as production looked for ideal outlaws. Jodie Foster, Michelle Pfeiffer, and Meryl Streep to name a few. It shows the strong women they were looking for from the very beginning. But with scheduling conflicts and other projects, production finally found their Thelma and Louise in Geena Davis and Susan Sarandon, and it couldn’t have worked any better. The chemistry between the two feels like catching lighting in a bottle. This isn’t your usual buddy movie, or even a best friend movie. To say this would be watering down the film as a whole. Thelma and Louise’s friendship must withstand a rollercoaster of emotions and the horrific circumstances that befall them. The duo is ride or die—thick or thin. The bond they exhibit onscreen is just as powerful as their general respect for each other offscreen.  This film would soon catapult these two actresses into the dramatic roles we associate with them today.

Now if there was a rulebook for the male film genre, Thelma & Louise threw it out at the beginning. Down to the most minute detail, the film flips those stereotypes and plays with the typical gender norms. One could say Thelma & Louise is a modern retelling of the classic film Butch Cassidy and the Sundance Kid. This time, women are running from the authorities. The “male gaze” of the sexualized Jane Russell in Howard Hughes’ The Outlaw is now a shirtless, oiled-up Brad Pitt. Who could forget a glistening Pitt in one of his first roles?

The key points of symbolism that are displayed in Thelma & Louise are no accident, but they are there to show the extreme changes in the women from beginning to end. So it begs the question, is Thelma & Louise a feminist film? In an interview with screenwriter Callie Khouri (who won an Academy Award for her work on the film), she spoke on the women’s outlaw ways saying that “you could not help but break the law if you were yourself.” No, she doesn’t advocate for every woman to start robbing banks, but sometimes women are confined in what society deems the norms, and to break away from societal norms can be awfully problematic for some. In the film, we see our two heroines baggy clothed, make-up free, and caked in the red dirt of the desert. They have shed the stereotypical female skin and, up until the end, refuse to go back.

Five years ago, in celebration of the film’s 25th anniversary, Davis and Sarandon were interviewed by ABC. It was a laid back interview in which the two mostly spoke on the fun of filming such a classic, and joked about taking the first selfie with their famous polaroid picture. Maybe if it wasn’t for the progress that’s been made between then and now, I would be doing a simplistic review, reminiscing on how interesting a tale this is and how great the performances are with these two amazing actresses. Thelma & Louise was always a strong female movie, but in today’s social climate, it has taken on a different role. Thelma & Louise depicts the strength of female empowerment — a theme that is definitely important now more than ever.