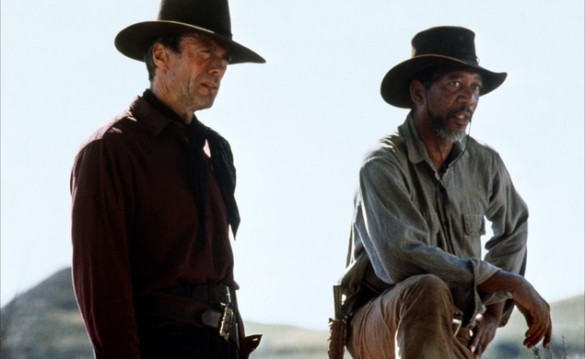 It’s hard to disassociate Clint Eastwood with the Western Genre. Eastwood and the Western seem to go together in the same way that peanut butter and jelly do, a perfect pairing, a match made in heaven. Over the years, Eastwood has starred as well as directed several Westerns including being the Man With No Name in the Sergio Leone’s Dollars Trilogy, starring in Hang ‘Em High (1968), The Outlaw Josey Wales (1976), and Pale Rider (1985) (the latter two films being directed by Eastwood himself). But perhaps his most iconic take on the Western is his Oscar winning film, Unforgiven. A film which Eastwood declared would be his last Western for fear of repeating himself or imitating someone else’s work. Unforgiven takes on everything that Eastwood and the Western represented and dismantles it bit by bit, until what we are left with is an interesting deconstruction of romanticisation of the Wild West and the mythology of the cowboy.

Unforgiven starts off  the image of a gorgeous blood red sunset with William Munny (Eastwood) standing over the grave of his recently deceased wife. We are told that his wife’s mother couldn’t understand why her only daughter would marry a man like Munny, a notorious outlaw and murderer who in his own words “killed women and children. [I’ve] killed just about everything that walks or crawled at one time or another.” Although we never see Munny’s wife ever depicted throughout the film, her presence hangs over him, trying to keep him on the side of what’s considered right, until his violence and brutality becomes uncontrollable, slowly boiling over in a bloody climax.

Munny is approached by the “Schofield Kid” (Jaimz Woolvett) who wants to recruit Munny in order to kill some cowboys who attacked and disfigured a prostitute called Delilah Fitzgerald (Anna Thomson). Delilah, Strawberry Alice (Frances Fisher) and several other prostitutes have banded together to create the bounty after the local sheriff “Little Bill” Daggett  (Gene Hackman ) didn’t serve out a punishment that matched the crime. Little Bill actually ordered the cowboys to bring several horses as compensation for the brothel owner, Skinny Dubois (Anthony James) reinforcing the idea that these women were seen as property.

Initially Muny refuses to help the Schofield Kid, however he realizes that his hog farm is failing and he must provide for his young children’s future, so he has to reconsider. In what is perhaps the films funniest scene, his children watch as Munny struggles to mount his horse. This is a man whose glory days are long behind him. Munny recruits his friend Ned Logan (Morgan Freeman), another retired outlaw, and they catch up with the Kid in order to track down the cowboys but Little Bill is determined not to have any trouble in his town and will do whatever it takes to maintain law and order.

Like The Wild Bunch, Unforgiven shows us a version of the Wild West that is so far from the squeaky clean days of the Golden Hollywood era. The levels of violence that is depicted on-screen is unflinching and brutal, and each character exists in a sort of grey area, in the middle of good and bad. Munny may do his utmost best to stay true and honest to the promise he made to his wife, but he is the one who ultimately takes the gun from Ned when he fails to shoot one of the cowboys.

Unforgiven takes the concept of the glamorous life of outlaws and cowboys, and shows us just how bleak it really all is. None of the characters are particularly heroic and they certainly aren’t noble. Even, the character of Little Bill, is shown to be a sadist with a warped sense of justice. Power has corrupted Little Bill, shaping him into the tyrant of the small town of Big Whiskey.

On first glance we assume that Munny and Little Bill are complete opposites but the men share many striking and somewhat disturbing similarities with each other, both yearn for a quiet life of domesticity with Munny’s farm and his children, and Little Bill’s cabin that he is building for himself. Both men have a reputation and a past that follows them around, so others fear and admire them from afar. And, both of their lives and personalities seem so entwined with violence and bloodshed that they become consumed by a bloodlust.

It’s nearly thirty years since the release of Unforgiven and the film still stands up today. It’s stunning cinematography by Jack N. Green is breathtaking, with the brilliant use of wide-shots and placing characters in the foreground in order to capture the epic scale and power of the wide-screen. Unforgiven is clearly a film made to be viewed on a large cinema screen, sadly I had to make do with my 45.2 inch TV screen. Lennie Niehaus score and David Webb Peoples script are also extremely noteworthy.

Eastwood is now 90 years old and hasn’t starred in a Western since Unforgiven, Richard Harris who played English Bob has passed away in 2002, Gene Hackman has retired from acting and while Morgan Freeman continues acting, he was recently accused of sexual harassment which may affect any future roles, in that sense Unforgiven marks the end of a chapter in the careers of these great actors. If we can take away anything from Unforgiven, it’s that the past can be so easily romanticised by Classical Hollywood, but reality comes in the form of characters like Little Bill and Willam Munny…complex individuals with complicated pasts, and we can neither forget nor forgive them for what they’ve done.