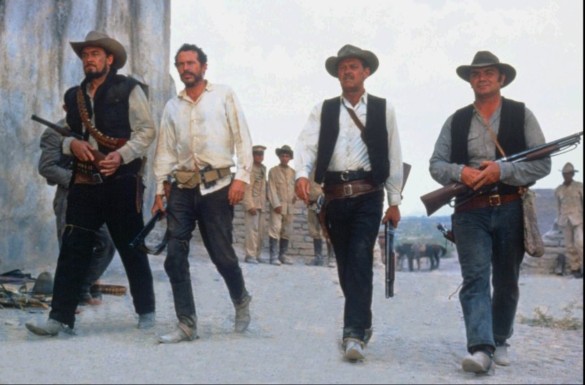 No one quite made films like Sam Peckinpah did. He was the embodiment of the 1970s auteur, a director who made his films in the exact way he wanted, regardless of whether the critics or the studio executives approved or not. George Roy Hill and Sergio Leone may have shaken up the status quo of the Western Genre, but Peckinpah stuck a stick of dynamite in it and blew it up with his bloodsoaked, ultra-violent flick, The Wild Bunch (1969). Writer and journalist W.K.Stratton nicely sums up Peckinpah’s intentions and the impact of the film, in his book “The Wild Bunch: Sam Peckinpah, a Revolution in Hollywood, and the Making of a Legendary Film”, stating that “in most ways the last Western. With it Peckinpah destroyed all the standard stereotypes that made up cowboy pictures that came before it.”

Studio executives may have voiced their concerns about the anti-heroes Butch Cassidy and the Sundance Kid just a couple of short years ago, but one can only imagine their sheer shock and horror watching the characters that make up the ‘wild bunch’ and the levels of violence that occur in just the film’s opening scenes alone. Bonnie and Clyde had ended in a morbid shootout,a ballet of bullets as some critics would describe it, but Peckinpah was not to be outmatched in his film. The opening remains raw and shocking today, even though we have witnessed the rise of the Slasher film. No-one, not even women and children, can escape the tidal wave of violence and mayhem that Peckinpah unleashes in all of its macabre glory.

It’s 1913, the glory days of the Wild West are nearly a faded memory. This is a world on the brink of a World War, where automobiles are fastly replacing the good old faithful horse, and the weapons are getting deadlier. We follow the likes of Pike Bishop (William Holden), the leader of a gang of aging outlaws which consist of Dutch Engstrom (Ernest Borgnine), brothers Lyle and Tector Gorch (Warren Oates and Ben Johnson), and Angel (Jaime Sánchez). Bishop is seeking retirement after one final score: the robbery of a railroad office containing a cache of silver.

However, upon arriving in town they are ambushed by Pike’s former partner, Deke Thornton (Robert Ryan), who is leading a posse of bounty hunters hired by the railroad. A bloody shootout kills several members of the gang as well as countless innocent civilians. Bishop, Dutch, Lyle, Tector and Angel all escape with their lives. They reunite with old-timer Freddie Sykes (Edmond O’Brien) and head for Mexico, where their paths soon cross with General Mapache, (Emilio Fernández) a corrupt, brutal officer in the Mexican Federal Army.

The opening may be a touch watch and certainly not for the faint-hearted, but it’s hard not to be impressed by the use of montage and quick cuts (the film was edited by Louis Lombardo who would later collaborate on several of Robert Altman’s films including his take on the Western, McCabe & Mrs. Miller). The opening to The Wild Bunch is something to marvel at in terms of how Peckinpah uses all aspects of filmmaking (cinematography, sound, music, editing, and action) to build up on mood, atmosphere, suspense and tension as well as playing on our expectations of how a Western should play out.

The Wild Bunch was a film that didn’t only just tap into the bloodshed that took place in the era in which the film took place in, it also acknowledged the changing landscape of the late 1960s and 70s. As Stratton breaks down in his book, cast and crew arrived in Mexico to start filming just days before the assassination of Martin Luther King, Jr. During the course of filming, the Vietnam  War was waging on. And a few short months later, Robert F. Kennedy would be assassinated. Violence was in the air. There was no escape and you could not shy away from it. And, here was Peckinpah who wanted to remind the audience, just how nasty it could all be.

When asked about the levels of violence in The Wild Bunch, Peckinpah is said to have replied that “The point of the film is to take this façade of movie violence and open it up, get people involved in it… it’s ugly, brutalizing, and bloody awful; it’s not fun and games and cowboys and Indians. It’s a terrible, ugly thing, and yet there’s a certain response that you get from it, an excitement, because we’re all violent people.” Perhaps, there’s another deeper message beneath all the bloodshed and violence. At one point, Pike Bishop says “We’ve got to start thinking beyond our guns. Those days are closing fast.” and this may be a message from Peckinpah himself, a warning to the society he saw imploding all around him…violence isn’t the answer.

While I don’t exactly have the stomach for the violence, the sexism or the racism/xenophobia of The Wild Bunch, I do admire it for its artistic and technical aspects. There’s something oddly fascinating about the film and Peckinpah filmography as a whole. Apparently, there have been talks of a remake since 2011, and in 2018 it was announced that Mel Gibson was remaking the film (possibly updating it to a contemporary setting). In all honesty, I can’t see this film existing any other time aside from 1913, and nobody could ever outdo Peckinpah.There can only be one Wild Bunch.