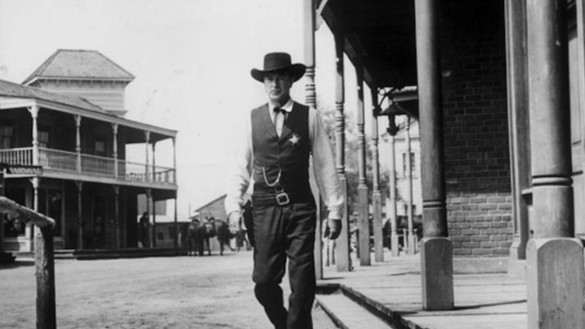 I have a confession to make. I do not like Westerns and I have never really understood the fascination of the Wild West; it  just seems so distant and alien to me. Perhaps this is down to my gender, or my age or maybe because I happen to be from the U.K. Whatever the reason may be, I can not deny the fact that I just can’t seem to get the appeal of the western; and I feel like I’m missing out on something important.

Nowadays, the Western film is no longer a staple of cinema, however there still seems to be this appreciation for the genre and it’s clear that it deeply resonates with many contemporary filmmakers. There’s no denying the genre’s significance and impact on shaping the cinematic landscape, not just in American filmmaking but on a global scale. The old fashioned John Ford/John Wayne style of Western may be gone, but the fact that these films still remain part of the cultural discussion remains something to be marveled at.

These films have their faults, especially in terms of their political correctness and their representation of the indigenous people of Northern America, Latinx people and the representation of gender. So, when visiting these films I want to be conscious of whether they stand the test of time or not, but also be fully aware that these films are a product of their time.

I certainly didn’t anticipate such a response, but it’s clear that the Western genre still resonates with many of us. For my first piece, I will be taking a look at High Noon, a Western with a very interesting background and rocked the Hollywood studio system in such a way that led to Western star John Wayne to deem the film as “Un-American”.

Directed by Fred Zinnemann and written by the blacklisted screenwriter Carl Foreman, High Noon is shown in ‘real time’. We open on the marriage of the Marshall of Hadleyville Will Kane (Gary Cooper) to Amy (Grace Kelly). However their big day is threatened by the arrival of the return of Frank Miller (Ian MacDonald), and his gang who are arriving back in town at noon with revenge and murder on his mind.

Kane is keen to leave Hadleyville for good but when he learns that Miller is back to kill him for putting him in prison back when his gang ruled town, he immediately makes the decision to stay and face his nemesis one last time for the good of the local community. However, Kane can’t face Miller’s gang alone, and tries to recruit deputy Harvey Pell (Lloyd Bridges) who is now shacked up with Kane’s former lover, Helen Ramírez (Katy Jurado), but Harvey refuses to help. Kane’s other friends including Sam Fuller (Harry Morgan), and Martin Howe (Lon Chaney) along with the other townsfolk are also reluctant to help. With time running out, it seems that Kane may have to face the gang alone.

Gary Cooper is fantastic in the role of Kane, bringing a stern faced determinism to the performance. We believe that Kane has led a long-tough life trying to uphold the law, we can see this in his eyes. Apparently, Cooper insisted on not wearing any makeup, in order to emphasize his character’s anguish and fear. At the time of filming, he was also recovering from recent surgery to remove a bleeding ulcer.

Originally the role John Wayne was offered the role but turned it down because of Foreman’s script, and Wayne actively supported the Hollywood Blacklist. In my opinion Wayne wouldn’t have suited this role, he’s too gung-ho and trigger happy, while Cooper looks like a man who believes violence is only a last resort.

While, the age difference between Cooper and Kelly (he was 50 and she was just 21 years old), is perhaps the most jarring aspect of the film, both actors deliver strong performances although Kelly seems a little bit amateurish. Her performance in High Noon caught her the notice she sought and would be the spring-board for her short career in Hollywood. Kelly’s role is somewhat upstaged by the wonderful Katy Jurador as Helen Ramírez. Jurador dominates the screen in every scene she’s in, easily proving herself as the better actress. She would go on to win the Golden Globe Award for Best Supporting Actress.

Kane is a hero that still stands up in our day and age. This is a man who continues on with his duty and loyalty to a town that doesn’t even lift a finger to return the favour. It isn’t a surprise that High Noon has remained a favorite film for several politicians (including president Bill Clinton), there’s something deeply commendable about the character of Will Kane that could only exist in the Western. Kane stands for truth and justice, but in reality things aren’t always as black and white.

While High Noon remains a solid, well shot and well-acted film; it’s the backstory of the film’s production which is the most fascinating aspect. The story and the character of Kane is steeped in isolation and frustration that the screenwriter Carl Foreman must have been personally dealing with when he was placed on the Hollywood Blacklist. For those who aren’t aware of the Blacklist, it was a list that consisted of 151 entertainment industry professionals who were denied employment because they were believed to be or to have been Communists or sympathizers.

Foreman was even summoned to defend himself in front of McCarthy’s witch-hunt committee, which saw him exiled and blacklisted when he refused to name names of fellow “sympathizers”. Foreman wasn’t the only one who had been placed on the Blacklist, the film’s cinematographer Floyd Crosby was also accused of communist leanings. While, Foreman and Crosby may have been accused of ‘communism’, High Noon was  actually criticized in the Soviet Union as “glorification of the individual”

After watching High Noon, it isn’t hard to see why and how it has remained significant in the cinematic and cultural landscape. It’s a film with an universal and timeless story, good versus evil. It’s an straightforward film with a clearly defined hero and villain. To say that they don’t make films quite like High Noon, is an understatement.