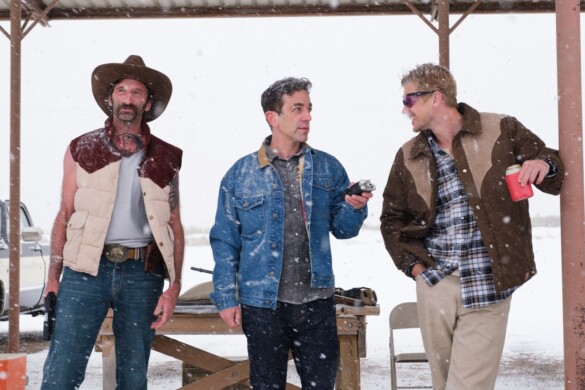 Synopsis: A radio host from New York City attempts to solve the murder of a girl he hooked up with and travels down south to investigate the circumstances of her death and discover what happened to her.

B.J. Novak’s feature film directorial debut, Vengeance, isn’t a perfect film. But it’s an earnest first effort from one of the most entertaining minds working today. Telling the story of a journalist traveling to Texas to investigate the murder of a girl he once had a relationship with, the film boasts an all-star cast full of colorful characters and sharply written dark humor, even if its ending underwhelms everything it previously built up.

It’s also a problem when we can see the ending coming a mile away when most of the film hinges on the “whodunit” aspect of Ben Manalowitz’s ( Novak) podcast. He travels to Texas to not only find out how Abilene Shaw (Lio Tipton) was killed, but to record a podcast to find out who (or what) killed her. When a specific character shows up (don’t worry, I won’t say who…better to find out on your own), I immediately said, “Ah! That’s the killer right there.” By the end of the film, I was right. The way that character is dressed immediately spells “MURDERER,” even if Novak tries to misdirect audiences before the reveal occurs. It didn’t work for me and may not work for everyone else.

But even with a formulaic plot and an underwhelming ending, Vengeance has plenty of strong moments. Most of these involve Ben’s relationship with Abilene’s family, particularly siblings Ty (Boyd Holbrook), Kansas City (Dove Cameron), El Stupido (a terrific Elli Abrams Bickel), and their mother Sharon (J. Smith-Cameron). Everyone has their time to shine and is hilarious together, especially during scenes where they talk about Whataburger or show the Texan way of life to Ben. Those scenes have a documentary feel to them, with the camera consistently moving through over-the-shoulder shots, which give the scenes an authentic, cinéma vérité look.

You truly believe that the Shaw family are real people. Novak struck gold by having highly talented actors like Holbrook, Cameron, and Smith-Cameron portray the Shaws, but it’s a testament to how insanely talented they are. I stand by a previous statement I made on social media that Boyd Holbrook is one of the most exciting actors working today, able to play any character with a wide range of emotions. And he is superb playing Ty–a clueless, MAGA-loving,  gun-toting redneck who thinks Adilene’s murder has something to do with a cartel or perhaps The Deep State (or both…why not…after all, he thinks there’s a conspiracy behind her death). His comedic timing is excellent, and he shares amazing chemistry with Novak throughout the entire film.

Issa Rae and Ashton Kutcher are also part of the cast, but their supporting roles are minor, and their talents feel underused. Kutcher is only in the film for two scenes, and though he has a strong, magnifying talent at playing his character, one would’ve appreciated if he had more scenes so that Novak could deepen the character a bit more. The same can be said for Rae–her performance is fine, but her character doesn’t add anything to the movie and slows down the pace whenever Ben finds a new piece of information on Adilene’s death. The podcast conceit also doesn’t work, as it hinders the “whodunit” aspect of the film more than anything else.

Still, even with a flawed story and some underdeveloped characters, Vengeance shines through a hilarious script and a colorful bunch of Shaws that protagonist Ben interacts with. And while the ending isn’t the most inspired way to cap off the movie, the finished product itself is still an enjoyable one, particularly when Novak focuses on Ben’s relationship with the Shaws. With this much talent packed into the cast, there’s no reason to skip Vengeance in cinemas. It’ll certainly spark some interesting discussions among audiences, as it did with mine while the credits were rolling.