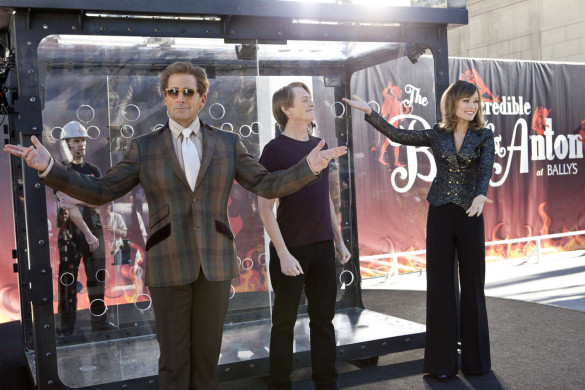 Synopsis: Best friends since childhood, magicians Burt Wonderstone and Anton Marvelton have a falling out after their magic act is threatened by up and coming new wave magician Steve Gray.

DIRECTION
Don Scardino directs one heck of a film in his comedic theatrical film debut. It’s rare that a dumb comedy has tight direction and spot-on casting but The Incredible Burt Wonderstone has every angle covered. The film keeps a consistent comedic tone even when dealing with some of the film’s more serious elements, yet it never feels bipolar like some dramatic comedies (e.g. Hancock, Mrs. Doubtfire). Scardino’s direction is rather masterful given this is his first big film, and it plays off as if a veteran comedic director helmed the project. The actors seem at home in the film, and the story comes alive; nothing feels out of place. Accomplishing this takes a crack hand at directing. With Wonderstone, Scardino proves his directorial abilities and that he deserves even more challenging projects in the future.

SCRIPT
The script for Burt Wonderstone is one the fresher stories in comedy in recent history. The story focuses on the friendship of Wonderstone and Marvelton rather than on romantic entanglements as most standard comedies do. The comedy is vibrant, deftly combining lowbrow slapstick and crudity with highbrow satire and observational humor. The story has a excellent structure that establishes the plot, follows through with it, and never drags. Where most comedy films fall apart at their conclusion, Wonderstone gets even better. The conclusion of the film is not only compelling in that it completes the underdog theme of the story but it also includes the film’s highest point of comedy. Overall, the script is fresh, full of comedic gems, and is brought utterly to life by the cast.

PERFORMANCES
The performances in Burt Wonderstone are what set this film apart from other supposed “dumb” comedies. Every performance in the movie is believable since it’s obvious all the actors gave themselves over fully to the characters created for them. Steve Carell slips magnificently into the role of Burt Wonderstone. Wonderstonee is a pompous ass, with a waxed chest and an ever more buffed personality, yet Carell adds humanity and sympathy to a character that otherwise might have been one-dimensional. Buscemi, as Anton Marvelton, plays well off of Carell. Marvelton is the straight man but Buscemi is playful enough with the role that he sometimes earns bigger laughs than Carell. Jim Carrey gives the best performance in the film as new wave magician Steve Gray. Jim Carrey’s performance plays like the harrowing acts of Chris Angel as directed by Salvador Dali. Olivia Wilde and Alan Arkin shine as supporting cast, both busting out the best of their comedic sides. The performances push the film to a higher level and help to cement The Incredible Burt Wonderstone as a milestone in comedic film.

SCORE
Lyle Workman’s score is the only aspect of the film not worth getting worked up about. The score is pleasant enough and underscores the action well, as it should; however, nothing in original music stands out. Although the score is fairly standard, the tracked-music is fantastic. The film’s music plays on its themes of magic with cheesy hits like The Steve Miller Band’s “Abracababra” as Burt and Andre’s theme song. Also, “On Top of the World” by Imagine Dragons works as almost a leitmotif for Burt Wonderstone. The song is played three times during the film and every time it comes on, sympathy for the protaginists escalates, causing the audience to root ever for the underdog. (Also, I’m a big fan of Imagine Dragons, so maybe it was just pandering). Overall, the score does its job, a few, special touches that make it better than average.