Movie Review: Dead Man Down is a good early surprise 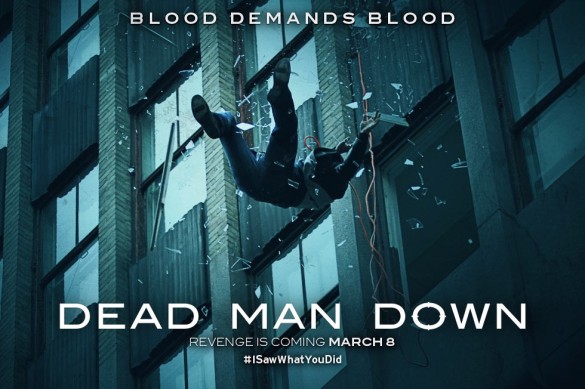 Synopsis: In New York City, a crime lord’s right-hand man is seduced by one of his boss’s victims, a woman seeking retribution.

DIRECTION
Niels Arden Oplev is brilliant in this film. In a film that only features three main sets, the direction couldn’t be better. He gets brilliant performances out of Howard, Farrell, and Rapace. While the supporting cast isn’t the greatest, it doesn’t take away from the film. Some of the film is slow moving as it’s setting up the story, but you start to feel for Farrell’s character and the script starts to come together. I love how he plays the relationship between Rapace and Farrell. At times it feels awkward and complicated, but throughout the film you start see the chemistry appear. The music wasn’t the best in this movie, but his choices later in the film made up for the beginning. The final scene really adds a lot to the movie for me. It’s a great action sequence, that at times is a little predictable, but is a ton of fun to watch. Overall, Opley does a great job with this movie.

SCRIPT
J.H. Wyman’s screenplay is strongly written and probably my favorite story of 2013 so far. The story revolves around Farrell’s character seeking revenge and trying to find healing for his broken heart. At the same time, Rapace’s character is seeking revenge while trying to re-find her beauty and breaking through her insecurity. The story also involves a crime lord finding out who’s tormenting him while it’s all in his own house. While the story revolves around revenge, heartache, insecurity, healing, family and friendships, not one of those elements necessarily is more than the others. The main theme of the movie is revenge, but I’d argue that finding healing in a broken situation and relying on friends and family is just as strong. I’d love to write a lot more about this script but I’m afraid I’d give away too much. Some of the script is predictable, but it doesn’t take away from the film. The dialogue is great and some scenes really stand out to make it thrilling.

PERFORMANCES
The performances are very strong in the lead roles. Howard, Farrell, and Rapace do a great job in their characters. As an ex-Hungarian, Farrell doesn’t have a great accent in the very few scenes he has it, but as someone who’s heartbroken and seeking revenge, he does pretty well. The biggest thing Farrell lacks is emotion. There are a few scenes where he brings it and it makes it believable. And at the same time, I feel like the lack of emotion fits the situation well. However, I would of liked to see a little more. Rapace is even better as an auto accident victim looking for revenge and in the middle of it falling for Farrell’s character. I’ve always been a huge fan of Howard and he is terrific once again. He does great as a character you like, but he’s just as effective as a bad guy. I didn’t really care for Cooper or the rest of the supporting cast. Their performances are forgettable and didn’t stand out. While I liked the character that Cooper plays, he didn’t add tons of value to it.

SCORE
The score was done by Jacob Groth and while I like some of his work, this is not his best. In the beginning act, the score is more horror film, and not action-thriller. It didn’t seem appropriate nor did it fit the film. The latter half of the film, especially in the action sequences, were much better. The soundtrack choices were also great adding the music of the film.