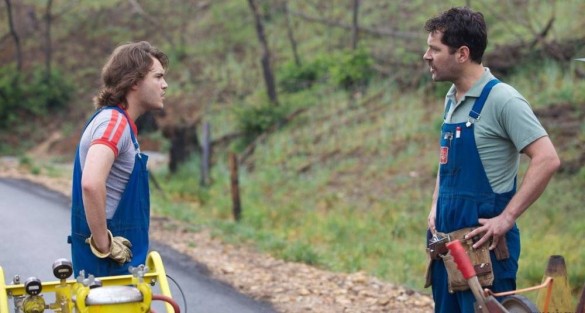 Synopsis: Two highway road workers spend the summer of 1988 away from their city lives. The isolated landscape becomes a place of misadventure as the men find themselves at odds with each other and the women they left behind.

DIRECTION
This is a huge step in the right direction for David Gordon Green who has dipped after his last few films, but Prince Avalanche is a pretty good film right out of the Richard Linklater playbook. His camera work is pretty simple but the nature shots are gorgeous and set the aesthetic really well. Green leaves the door open for the performances to shine and he tells the story well. The pacing is a bit slow but the characters he shows are interesting, which is what this movie is about. Plus, you got to love any film that features Ale 8, a local Kentucky tradition.

SCRIPT
The story is set in late 1980’s where Paul Rudd’s character is trying to find himself as he’s isolated in the Texas wilderness after fires destroyed much of the area. Along side him is his girlfriend’s brother (Emile Hirsch) who is a young 20’s something who finds nature as an aphrodisiac and is looking for more promiscuity than anything. However, it’s the uniqueness of the two that sort of brings them together at the same time. The story is a play on relationships and how sometimes friendship can form out of the strangest things. At some point, the tables turn and it’s within the troubles where the film is the strongest and while it’s a little dull at times, the characters are interesting. The way they play off each other is intriguing and it’s a fun little getaway in the Texas outdoors.

PERFORMANCES
Paul Rudd is incredible and pretty different from the norm. When actors go for something different but can still have some of the same vibes while being interesting within the story, you got to love it. Rudd’s character is a little off in some ways and he plays it incredibly amazing. Emile Hirsch is also great and is really good in roles where he gets to be out-of-the-box type characters. The chemistry between the two is also great and they work well with both performances. Plus you can’t forget Lance LeGault as a truck driver who only makes a few appearances but his character is actually crucial to some of their interactions leaving some though on what just happened. And he adds some great fun to the character.

SCORE
Easily one of the best parts of the film the score, which is done by one of the best bands out there, Explosions in the Sky. Their score is low-key, strong and very fitting to the outdoors aesthetic we have here. The music is fun, yet embodies the main themes of the film and is a score I would recommend outside of the movie. Great stuff here.