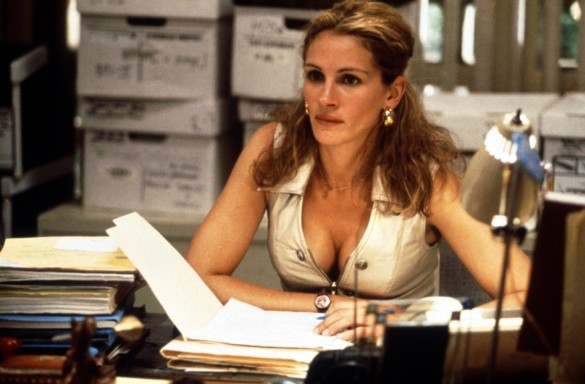 DIRECTION
Steven Soderbergh is really great at taking characters in real-life settings, making them relatable and giving them some depth. And Erin Brockovich is easily one of his biggest stand outs. The camera work he uses is pretty simple, yet extremely effective and he tells the story of Erin Brockovich in a fun and engaging way. The 90’s aesthetic is mostly there, especially with some of the costume design and Julia Roberts’…umm, let’s just say outfits she wears. The music choices he has is good and he let’s the story be the overall focus point. This is Soderbergh at his best.

SCRIPT
The story of Erin Brockovich isn’t a change-the-world story but it is a change-the-lives-of-a-lot-of-people story which is still amazing. In the 90’s a power company called PG&E was poisoning the water supply of several California towns, one of which Brockovich was close to. The chromium-filled water did a lot of damage to the local residents who came into contact with that water. Brockovich was a single mom with three kids at the time barely scraping by and looking for a job when she ran into Ed Masry, a small time lawyer. Brockovich became his legal assistant and her job was pretty minimal, until she found out what PG&E was doing. And what makes this script and story effective is the fact that Brockovich could of stayed in her little bubble, but didn’t. She took a stand when she saw the effects and did something about it. While Brockovich may be abrasive and strong, she’s soft at heart and it’s her passion to do what’s right that is contagious here, not the chromium. She cared deeply for the people this effected and this case was personal to her and it’s a story that Soderbergh and Roberts tells really well.

PERFORMANCES
Roberts won the Oscar for her performance here and it’s absolutely deserved. She’s strong, independent and brings this character to life in amazing ways. The performance is captivating and really fun although she is in your face a little bit. It’s the passion she brings that stands out though. Robert Finney is also great and was nominated for an Oscar as well. And again, very deserving for the nomination. As the lawyer, he’s relatable and he brings a real-life aesthetic to the character. The chemistry between him and Roberts is impeccable and it makes the movie what it is. Especially since this film lets the performances and story stand out. Aaron Eckhart is almost unrecognizable as a biker guy who befriends and sort of dates Brockovich. His performance, while not as prominent, still works well and adds a nice element to the film.

SCORE
Thomas Newman’s score is good but is drowned out by the performances here. It’s not really memorable but it works for what this movie is trying to accomplish. Sheryl Crowe adds some nice songs and elements to the film that works too. The music here isn’t going to stand out but for what this movie is, it’s not bad and is actually a descent listen to outside of the film.