Movie Review: ‘Official Secrets’ is officially one of the best surprises of 2019 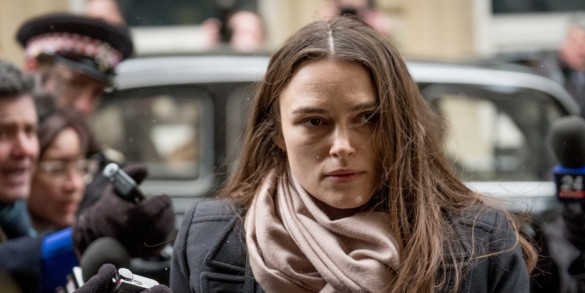 Synopsis: The true story of a British whistleblower who leaked information to the press about an illegal NSA spy operation designed to push the UN Security Council into sanctioning the 2003 invasion of Iraq.

Official Secrets is the perfect “based on a true story” drama we’ve been missing this year. It has a phenomenal cast and the story is told in a way that makes it easy to watch for any viewer. I have high hopes for it this coming awards season, but no one is talking about this film (at the moment), so I’m afraid it may be overlooked. There have been a lot of good films this year, many of them dramas, and even more yet to come. That being said, Official Secrets still stands out for me and I feel it offers something a little different.

Official Secrets is about Katharine Gun, a former GCHQ (Government Communications Headquarters, basically the UK’s NSA) translator who leaked classified information about the approaching war in Iraq. The movie takes place between 2002-2004, during the G.W. Bush presidency, while the United States was trying to get the UN to allow them to go to war in Iraq by claiming Iraq had WMDs. I was in high school when all of this was happening, so I didn’t pay attention to current events unless a teacher told me I had to. Now, 15 years later, I am interested in politics and current events, and this film was a good way to learn about things I didn’t pay attention to as a teenager. The film tells a complicated story and navigates a complex plot while maintaining its “easy to watch” vibe. A lot of political drama films are hard to follow or are boring; Official Secrets is does not fall into that stereotype. I was hooked from the first five minutes. Much of that was due to the amazing cast, but I was also on the edge of my seat, needed to know how it all played out. If you’re unfamiliar with Katharine Gun’s story, I recommend not googling it before watching the film.

I have countless positive comments for this film. It has one of the best overall casts I’ve seen this year. I spent half the movie thinking “oh, it’s that guy from Harry Potter, or Doctor Who, or Game of Thrones”. The stand-out characters for me were: Matt Smith who plays journalist Martin Bright, Rhys Ifans as another journalist Ed Vulliamy, Ralph Fiennes as barrister (lawyer) Ben Emmerson, Conleth Hill as Roger Alton (editor of The Observer), and of course Keira Knightley as Katharine Gun. Keira Knightley does a fantastic job portraying Katharine Gun without doing an exact impersonation. She didn’t try to look like her, Knightley keeps her brown hair when Gun is a blonde in real life. Something they did copy exactly was a couple of the outfits Gun wears. I searched for more information about the real-life events and found a picture of Katharine Gun wearing exactly the same thing that Keira Knightley wears at the end of the film. I thought that was a nice touch. There is an excellent mix of drama and humor without losing the films main message. This is especially good in scenes of the journalists (Smith Hill, Goode, and Ifans in particular) and in scenes with banter between lawyers. It does a good job handling serious, tense subjects without getting too dry or boring. They explain complicated topics in an easy to understand way and without dumbing things down too much. An example is they included an on-screen label and description for GCHQ early in the film; so people unfamiliar with British government agencies understood who they are and what they do.

I don’t have anything negative to say about this film. If you don’t like watching movies that discuss politics or have harsh criticism of certain political parties and events; then this may not be for you. The film is critical of the G.W. Bush presidency and his administration, Tony Blair and other various British political figures, and the war in Iraq.

Official Secrets is officially my favorite drama of 2019 (so far). It’s a phenomenal film, packed with amazing actors, giving equally amazing performances. It tells an important, true story in an easy to watch way. I cannot recommend this film enough; go see it if you have the chance.