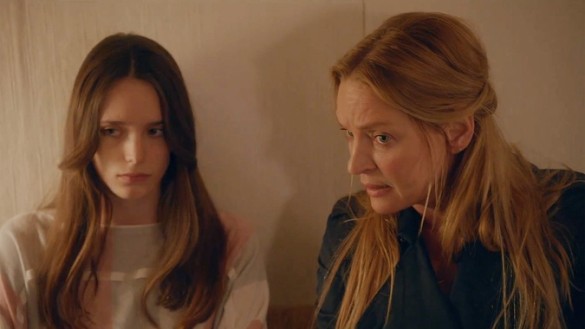 DIRECTION
Lars von Trier has always been known for pushing boundaries and as you can expect here, von Treir takes taboo and pushes in into the norm as sexuality and insecurity reign supreme. The aesthetic he creates from the very beginning suggests a tone that only you can expect from von Trier. The use of flashback storytelling and fly-fishing comparisons were brilliantly manipulated to catapult us into nymphomania. While boundaries were never considered, it never feels out of line or repulsive and is crucial to carrying the story forward, which gets intense and intimate. Von Trier uses some creative camera work when exploring sexuality, yet at times he’s more straight forward and even pornographic. While some shots were arguably not necessary, it’s never too distracting and you become engaged in this fascinating world.

SCRIPT
While the story is caped in nymphomania, the story really revolves around insecurity and how that elevates addiction to pretty rough territories. The story revolves around Joe, who finds herself hurt and beaten, when a nearby neighbor, Seligman, comes to her rescue. Once they settle down, Joe starts to recount her life to Seligman and how sex-addiction became an identity to her from an early age. Seligman, on the other hand, is a life-long virgin who helps her analyze her addiction and how it’s impacted her. The conversations are intelligent but also real and compelling. What’s interesting is the exploration of how Joe starts to realize that her sex addiction is something more at the core. At the center of every women is a desire to be loved and to be wanted, yet her isolation only drives her addiction and insecurity becomes her best friend. When she finds out that the “secret ingredient to sex is love”, it flips her world upside down. It’s that battle between the want and the overpowering desire for pleasure that pushes the story into some provocative and rich places.

RELATED: 300: Rise of an Empire Review

PERFORMANCES
Charlotte Gainsbourg and Stacy Martin do a fabulous of playing Joe and young Joe respectively. Martin’s body language is elegant in selling the sexy behavior this character dives head first in and her sex scenes seem more than genuine. The graphic nature never seems overbearing for our actors and they do a wonderful job. Stellan Skarsgård, of Thor fame of recent, is masterful as Seligman. His fly-fishing comparisons are brilliant and his dynamics with Gainsbourg are important for creating that authentic feeling this film explores. Shia LaBeouf has a limited role in Part 1 but he does a good job and has an accent to boot. Regardless of his mental stability over the last several months, the dude can act and he shows that once again here.

SCORE
There is no original score but von Trier uses some classical pieces that fill the music void very nicely. The music is a stimulating companion to the story and in some scenes it elevate’s the content. And while most of the music is nice orchestral pieces, you will recognize Born To Be Wild by Steppenwolf.

FINAL THOUGHTS
Nymphomaniac Part 1 is a strong exploration of self-discovery and how insecurity at it’s core fuels nymphomania. Along side that, Joe uses her sexual power as a woman to seduce men at will and fill the void that seems to be driving her wild. Although at times she tries to fight it, addiction is a powerful weapon and von Trier shows that magnificiently. Sure, some of it can seem graphic to some and von Trier uses all of his NC-17 rating, but if you can get past that, there’s so many elements beneath the surface that make this film fascinating.