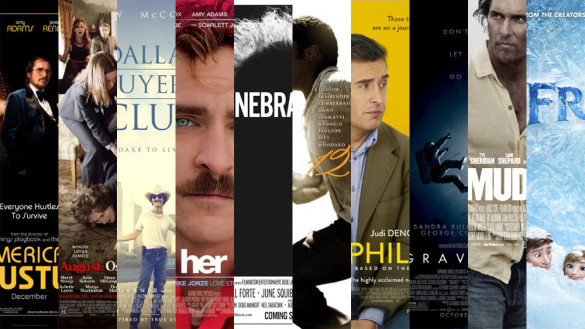 Fair Warning: This podcast is a little lengtheir than our normal shows, but this was a special podcast and we had a ton to discuss when recapping film in 2013. It was a lot of fun but just as an FYI.

This week on the InSession Film Podcast it’s a very different show as Jon Asher (Second Rate Report) drops by to help us discuss the best and worst of movies in 2013 in our first ever InSession Film Awards. Some of our awards are the familiar one’s you’ll know but a few of them are a little different and unique. We also have some individual awards that we gave away that was really fun and if you know us well, you may not be too surprised. During this segment you’ll also hear from other podcasters and friends give their favorite films of the year which was really exciting. And to top off the show, we give our Top 10 Movies of 2013, which is one of the best segments we’ve ever done on our podcast. This was an amazing show as we covered a wide spectrum of film in 2013. How would your awards compare to ours?

Jon was a really great guest this week and his video reviews are one’s you want to be checking out. He knows film really well and is great supporter of our show. It was a complete honor having him on our Awards show. Also note, there is BIG announcement at the end end of the show that is extremely bittersweet for us but it’s worth hearing. We hope you have fun listening to this week’s show since we had a blast on this episode. And it’s always fun this time of year to have these kind of discussions. Check out the show and let us know what you think in the comment section below. Hope you enjoy and thanks for listening!

2013 was an outstanding year for movies and even though it had a slow start, the latter half of the year picked up in huge ways that makes this year stand out. The summer may not have been as epic as others in the past, but it still had it’s gems, and the fall was out of this world (literally). The films in our Top 10’s are some of the best films we saw and had fun with this year, featuring outstanding performances, beautiful directions and even a 3-D experience that may be the best ever. Especially since this was our first year for InSession Film, this was a lot fun seeing what movies really made this a special year for us.