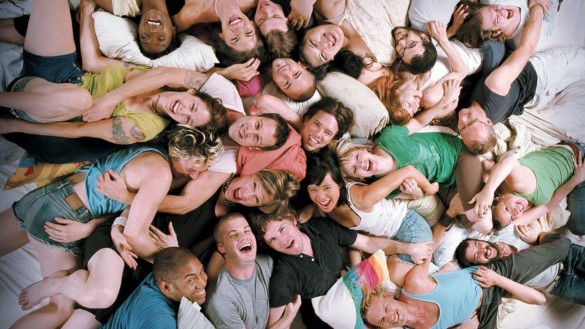 We talk about sex scenes as steamy, cheesy, teasing, or ridiculous and just a throwaway sequence to showcase nudity. They have to be tastefully done or else it just looks exploitative. At the same time, as James Ivory complained regarding Call Me By Your Name, American cinema is afraid to show graphic male nudity and that it is a double standard to emphasize the female body less than a male nude body. For traditional movies, it has to be done carefully so a sex sequence may make sense. That is not the case with avant-garde cinema, daring to push the boundaries on what they can show and not afraid to show real sex. As in, close-up, full-frontal penetration, hetero and homosexual – I am not joking because there are movies where unsimulated sex plays a role in the depiction of love and carefree behavior. And some are actually not that bad – or at least quite interesting when watching it in its full context.

The two-part Swedish film by Vilgot Sjöman brought on the spotlight because of highly political themes, such as intercutting scenes between the protagonist Lena with documentary footage of Martin Luther King Jr. as if she is talking to him, as well as a frank scene of sexuality including one shot of Lena physically fonding with her lover’s genitalia. Its documentary style format mixing in views of sexual liberation with the advocacy of class equality and social justice was part of a radical wave of filmmaking in Europe and Sweden was ahead of the curb in this department. (All you have to do is watch Ingmar Bergman’s Persona for the split-second shot of an erect penis at the start and a scene about an orgy being openly spoken of.) In the US, a court case involving a theater owner who was arrested for showing the film in Massachusetts made its way to the highest court which ruled that the film was not obscene.

Japan sees sex and nudity as very taboo. Any imports with sex/nudity are either blurred or edited out. In fact, for the confrontational Nagisa Oshima, it was listed as a French production shot in secret in Tokyo and then edited in Paris before it came back to Japan. In The Realm Of The Senses is a fictionalized account of the shocking true story of a geisha, Sada Abe, who has a love affair with a married man and finds excitement in autoerotic asphyxiation and (spoiler alert) strangles the man dead. The last scene shows what made the story even more sensational: she cuts off his manhood as a symbol of power that she and he would be together forever.

For the first thirty years, the uncut version was only permitted in certain film clubs, but it got the full explicit treatment for the public via Criterion Collection. The explicit sex is another exploration of Oshima’s criticism of Japanese society, this time of looking away from the subject. The film is set during the rise of the Imperial Army a few years before World War II where machismo is high. Sada Abe is a folk hero, a radical feminist who is an outsider and uses sexual power to seduce a man into her own realm and in the end, physically grabs it.

He made one movie about sex and the human addiction to it which had to feature shots of explicit acts but also inserted one scene of each in two prior films. The Idiots (1998) reflected the values of Dogma 95 where Von Trier and his Danish contemporaries followed a set of rules which included nothing depicted in their work could be fake. That included sex and in his comedy, a group of anti-conforming adults decides let idiocy be part of their daily lives and one person asks without any protest from anyone to start an orgy. Then, in his horror film Antichrist (2009), the prologue features the slow-motion death scene of a toddler while the parents make passionate love in the shower.

In between directing Nicole Kidman to an Oscar-nominated performance in Rabbit Hole and directing and starring in the off-Broadway hit Hedwig And The Angry Itch, John Cameron Mitchell spent two years experimenting and improvising a romantic dramedy about a group of New Yorkers, gay and straight, who have their struggles with relationships and find themselves sexually frustrated. Instead of the metaphors or the simulated depictions, Mitchell decided to get actors – some who worked on Hedwig – who was willing to bare all and then some.

“Sexuality is the lyricism of the masses,” wrote French poet Charles Pierre Baudelaire. It is a subject that drives in our head consciously or not. Hitchcock was famous for metaphors of sex and touched on taboo themes, flirting without the showing of nudity until his second-to-last film, Frenzy. Until the late 60s, sex could not be obvious and explicit; people like  Vilgot Sjöman and Andy Warhol took it the extreme and made it mainstream for all of legal age to watch freely. Since then, other explicit acts directed by notables including Gasper Noe (Love), Vincent Gallo (The Brown Bunny), and Catherine Breillat (Anatomy of Hell) were made to expand the art film genre and be transgressive with their works. The Europeans have been notable; it is called New French Extremity. Others will call it straight up pornography.