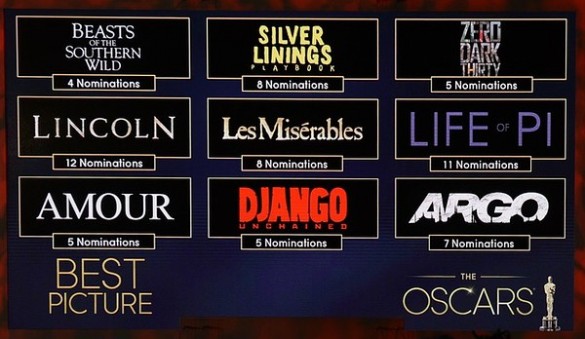 A giant screen shows the Oscar nominees for Best Picture at the Samuel Goldwyn Theater on January 10, 2013 in Beverly Hills, California. Steven Spielberg is hoping for good news Thursday as Oscar nominees are unveiled, with his “Lincoln” among frontrunners, albeit in a wide field as Hollywood’s awards season enters the home straight. The nominations for the 2013 Academy Awards were held at at the Samuel Goldwyn Theater in Beverly Hills, in California for the famous golden statuettes, to be handed out on February 24. AFP PHOTO/ROBYN BECK (Photo credit should read ROBYN BECK/AFP/Getty Images)