I’m usually first in line to support any type of film that features a giant monster.

So I was beyond delighted to hear that King Kong was headed to Warner Bros. to eventually clash with the King of Monsters, Godzilla.

I was so excited that I re-watched Godzilla.

In hindsight, I shouldn’t have done that. 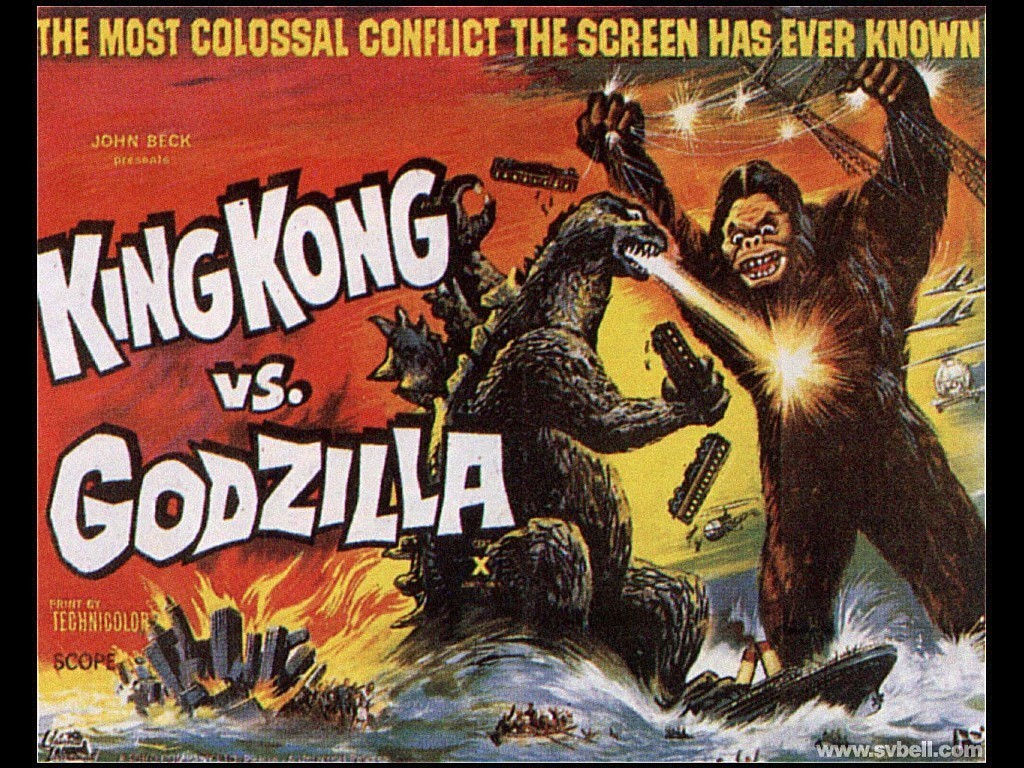 In theory, it seems like an incredible idea to have these two behemoths face off again. When the original was released in 1962 it was a massive money maker for Toho, and I think it’s safe to say that moviegoers are still in love with kaiju. Pacific Rim pulled in $411 million worldwide, and Godzilla raked in $529 million. Even Peter Jackson’s way too long King Kong brought in $550 million. In short, we yearn for monster movies. Whether it brings us back to our childhoods, or makes the hair on our necks stand on end, we can’t get over giant things destroying our cities (which might explain why we’re getting a Rampage movie with The Rock).

So I understand that logistically it makes sense to do a Godzilla vs King Kong movie. It’ll sell a ton of tickets, t-shirts, and toys, and it will generate even more buzz for the genre. But that doesn’t mean it’ll work on the big screen.

But before we get to the specs of Zilla vs Kong, let’s establish some background.

The next time we see King Kong it will be in 2017 in Kong: Skull Island. By all accounts, the cast looks really good (Brie Larson, Tom Hiddleston, John C. Reilly, Samuel L. Jackson, and Toby Kebbell are all involved), but we don’t know much about the plot. There’s heavy speculation that this film will be a prequel of sorts to the Kong story that is so familiar to us all. But recently, Tom Hiddleston said that director Jordan Vogt-Roberts is seemingly creating an interesting (yet familiar) take.

“The way Jordan Vogt-Roberts has conceived of it,” he said to UPI. “There’s something in there which I find very compelling about King Kong as an emblem of the power of nature in some way, and man’s relationship to it. I think he’s got just brilliant ideas about exploring that. Incredible sequences, a particular context they put King Kong in that you’ve never seen him in before, so I’m really excited.”

The reason I described it as “familiar” is because this sounds very,  very similar to the way Gareth Edwards described Godzilla. Here’s what he told i09 in 2013:

“It’s more about the power of nature, and how we sometimes abuse that power. Godzilla is a symbol of nature coming back to put us in our place, to restore the balance or however you want to define it. Films like this are powerful when you feel like you deserve what’s coming. It’s not just a fantasy.”

It will be interesting to see Kong in this light, especially considering that he might not be the most impressive thing on Skull Island (a giant monkey seems infinitely more believable than dinosaurs running around). But even though it might be interesting, it kind of takes the Kong out of Kong.

King Kong is a massive beast, violent in nature, who is semi-tamed/enthralled by a beautiful blonde woman. He’s still supposed to have some semblance of a heart – something that we, as humans, can relate to – beating inside his giant chest. He’s still supposed to seem somewhat human, even if it’s just the emotions that we relate to. Making Kong more like Godzilla removes all of those things. We love Godzilla because of his sheer awesomeness. He’s a massive, nuclear, force of destruction. His creation was representative of one of mankind’s darkest moments. He represents our sins and our evil. He isn’t supposed to be relatable, he’s supposed to be terrifying.

In terms of a timeline, a Godzilla sequel will hit in 2018, a year after Skull Island, so it’s safe to assume that we won’t see these two share the screen until – at least – 2020. But that’s good news for King Kong, because it only puts off his quick and inevitable death.

I mentioned early that I rewatched Godzilla after seeing the news, and I was instantly reminded of his massive scale. In the new continuity, Godzilla stands at 350 feet tall. The last incarnation of Kong was about 50 feet tall. Remember, Kong climbs up the Empire State Building, which stands at 1,250 feet (excluding the tip). Godzilla is nearly a quarter of that. Also, let’s not forget that a group of sailors/crewmen manage to subdue and tie down Kong to haul him back to the states. There’s no way anything like that is happening to Godzilla.

So, how exactly will the two fight?

Alright, it probably won’t look anything like that. (But isn’t that great?)

If they choose to make King Kong bigger, there’s no way he’d be able to stand at the top of the Empire State Building. If they keep him a similar size, he’ll be approximately as tall as Zilla’s shin. If they choose to change the size of Godzilla, it will royally screw up any continuity, because we will already have seen two films with him. It appears, more or less, that Warner Bros. backed themselves into something that sounded cool at face value and never thought twice about it. We know that Godzilla will face off with some combination of Mothra, Rodan, and King Ghidorah in the sequel. So he’ll be undefeated against giant monsters entering whatever showdown with Kong. There’s literally no way Kong would be able to beat Godzilla. There’s nothing he could do to cause any sort of harm to this version of the King of Monsters.

Conventional wisdom says that Zilla and Kong will duke it out for a bit, then discover a common enemy and have to work together.

That being said, Warner Bros. can shut up and take my money. I’ll see you in line in 2020-something.