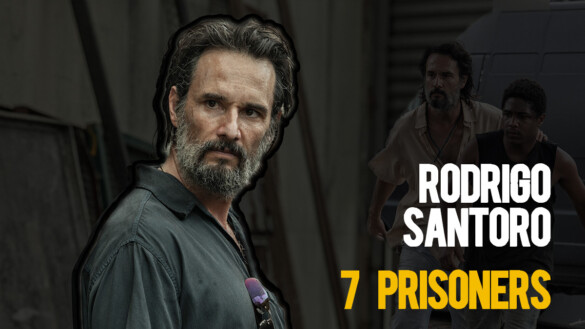 The (Im)Possible Contenders is intended to be a collection of features highlighting great films, performances, and craftsmanship that should be in the awards conversation, but due to their international, non-fiction, or independent nature, are unfairly ignored or not taken seriously by either voters or powerful outlets. This is an invitation to give these great films a chance. They might not get any sort of buzz, but they are worth your while.

For Your Consideration, the (im)possible contender this week is Rodrigo Santoro for Best Supporting Actor in 7 Prisoners.

In Alexandre Moratto’s harrowing portrayal of modern-day slavery, 7 Prisoners (now streaming on Netflix), Brazilian actor Rodrigo Santoro plays Luca, a ruthless man who runs an illegal scrapyard with the aid of corrupt police officers and politicians. His workforce consists of four new arrivals led by 18-year-old Mateus (Christian Malheiros), who, after realizing the hell he’s in, soon earns Luca’s trust as his second-in-command in the hopes of facilitating his and his friends’ liberation.

Gone is the Rodrigo Santoro that was named among People’s magazine and E!’s sexiest men alive. Here, he’s transformed into a bearded, diabolical oppressor and human trafficker who commands attention. Luca is vile and cruel, but never one-dimensional thanks to Santoro’s compelling performance. His entry into frame changes the mood of any scene instantly as his presence signals grave danger, but also a twisted glimmer of hope. His confidence creates terrifying obedience and his diabolical charisma is highly effective in portraying the complex power schemes through which the enslaved becomes subordinate.

Santoro takes full advantage of the depth granted to his character by the script (written by Moratto and Thayná Mantesso). As Luca and Mateus start to get closer and the morals of the story become more complex, we learn about the former’s life story and his motivation to operate in such hideous ways. Moratto doesn’t want you to like Luca, but to understand where he comes from and see through his manipulative discourse. Santoro pulls out this risky maneuver with masterful precision: he becomes a cunning puppet master of unspeakable deeds.

In case you can’t remember his face due to his terrifying transformation in 7 Prisoners, here’s a reminder that Santoro is no stranger to Hollywood. After earning rave reviews for portraying a teenager confined in a mental institution in Laís Bodanzky’s Bicho de Sete Cabeças in 2000, Santoro started appearing in Hollywood films such as Charlie’s Angels: Full Throttle, Love Actually and Zack Snyder’s 300, where he played Xerxes. But throughout it all, he’s kept coming back to Brazil, performing in award-winning films and telenovelas.

Alexandre Moratto first learned about Santoro’s depth and dynamism as a performer after watching Héctor Babenco’s Carengiru (2003) where he plays a transsexual prisoner. Moratto was further impressed by Santoro’s work ethic when he learned Russian to play a translator for the lead role of Cuba’s 2020 Oscar pick Un traductor.

However, the experience wasn’t easy for Santoro, who immediately hated the character after reading the script. In an interview with Screen Rant, he described his experience shooting the film as “painful.”

“It was very painful to play him, because of the way the character is and the things that he does. I would come back home and try to unplug, and it wasn’t easy. I felt really bad during the shoot, just because my instrument is my own body and my emotions. It kind of stayed with, and it’s been a learning experience,” he recalled in the interview.

FYC: Other categories that 7 Prisoners deserves to fight for

Although this piece is focused on Rodrigo Santoro as Best Supporting Actor, 7 Prisoners should undoubtedly be competing for categories such as Best Picture, Direction, Actor, and Production Design.

The case for Best Picture: 7 Prisoners is inspired by real-life cases of human trafficking; in fact, one of its cast members is a survivor. This is a film that doesn’t have metaphors, heroes, or winners. Its power stems from the fact that it portrays with raw authenticity a real-life problem that is out there and getting bigger each day. It’s a devastating and compelling moral thriller with no easy answers.

The case for Best Direction: Moratto creates a deep immersion into the claustrophobia, horror, and utter hopelessness of human trafficking. Through masterful command of his cinematographic tools at hand, he explains how exploitation works while presenting thought-provoking moral conundrums, one after another. Also, his precise actor direction is key to conveying the shifting power dynamics at play. And most importantly, he never succumbs to heroism, moralistic hypocrisy, or your stereotypical American happy ending. He remains firm in depicting human exploitation exactly as it is: violence.

The case for Best Actor: Mateus is a young man who starts with honest and pure intentions, but is forced into a struggle with his conscience, eventually becoming a cog of a disturbing reality. The expressive and naturalistic performance of Christian Malheiros allows us to further understand the moral complexity of the situation, while his mix of vulnerability and determination convinces you to temporarily root for him even though you know where his character is headed. A tremendous performance.

The case for Best Production Design: The junkyard where Mateus and his friends are imprisoned was built from scratch by production designer William Valduga. “We couldn’t find a junkyard because they are all active locations, they live off scrap metal so you can’t just tell them ‘we are going to shut you down for several months to shoot a movie,’” explained director Moratto in The Director’s Cut podcast, who praised Valduga’s research passion to ensure every little detail was accounted for. The result is an authentic set that enhances the claustrophobia and hopelessness of the situation.

7 Prisoners is streaming on Netflix. You can check its Netflix FYC profile here.