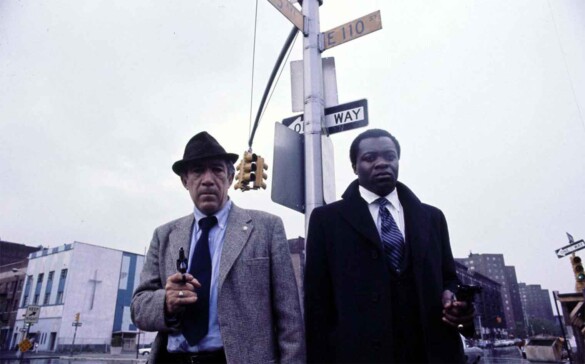 Genre is an interesting beast and we can come to it for different reasons. Blaxploitation can, of course, be problematic in its representation of Black culture, but is also particularly interesting, especially as a time capsule. Additionally, it offered a sense of freedom and agency previously unheard of for Black creators, as well as audiences. Similar to many obnoxious cinephiles of my age, my introduction was interviews from Quentin Tarantino. And say what you will about his comfort with certain slurs, but Tarantino did shine a light on underseen films and genres, blaxploitation included. Whether it be the relatively famous Shaft films or lesser known actual classics like Sweet Sweetback’s Baadasssss Song (also available on Criterion as part of the Melvin Van Peebles Collection), there are great watches to be found within that work. And leaving the Criterion Channel this month is a film derivative of blaxploitation, Across 110th Street.

Across 110th Street is known most for its music, from soul superstar Bobby Womack. There is good reason for this, even beyond the titular track. The entire film is filled with memorable music, both listened to in a silo and in the context of the film. Womack’s instrumentation and vocals provides Across 110th Street with not only a pumping heart but also a sense of reality, also aided by the decision to film it in actual locations, as opposed to sound stages. One only has to listen to that title track for about ten seconds to get an immediate feel for the film and the setting.

But this film is more than its music. It is most importantly (and most obviously) a film about race, poverty, and the insurmountable odds against young Black men in this situation. Across 110th Street begins with Jim Harris (Paul Benjamin) and his crew attempting to steal a large amount of money from a Mafia controlled bank posing as police officers. After this inciting event, the chase is on, Jim is hunted by both the Mafia and the police throughout the runtime. In perhaps the film’s most affecting scene, Jim details exactly why he has turned to criminal activity. A middle-aged Black man with a record of incarceration, health issues, and no education has few options and feels trapped. It feels rare to see a performance of frustration and helplessness, paired with masculinity. We immediately understand the terror and lack of choice. Would any of us want to work ourselves to the bone in a dead end job, knowing that we would probably die broke in the same neighborhood? Across 110th Street never judges Jim, but also lets him understand that no options are easy or free.

But no discussion of Across 110th Street would be complete without mention of the film’s two major stars or its difficult relationship with law enforcement. The plot follows Lieutenant Pope (Yaphet Kotto) and Captain Mattelli (Anthony Quinn) as they track Harris. Two police officers of different racial backgrounds might not strike the audience as an interesting choice, but the screenplay from Luther Davis offers a new twist. Instead of the Black officer being a wild card and his opposite being a “by the book” stereotype is flipped. This is especially impressive because both Kotto and Quinn are large intimidating men, in a near constant standoff. Pope is placed in charge because of both political machinations and due to Mattelli’s age and past. Mattelli, unsurprisingly, is upset by this, but is also almost unflinchingly racist, so this causes a number of problems. It takes a strong actor like Kotto to stand toe-to-toe with Quinn and still be a character we root for. Although he usually does the right thing, he also will not allow anyone, regardless of background, to walk over him. Kotto and Quinn’s yelling matches are things of legend and would make Across 110th Street worth watching all on their own.

Across 110th Street is not a film that was particularly well liked upon release, and it is easy to understand why. It is a lean, mean movie with almost no likable characters and a wildly cynical worldview. In a scene that leads to Jim Harris’s location being discovered, the last member of his crew is murdered, hung upside down, and dropped, in an inversion of a lynching. The racist mobsters perform this without a second thought and it is just one moment of helplessness that hammers home this repeated theme of inescapability. Although the leader of these men, Nick D’Salvio (Anthony Franciosa) is punished and killed at Harris’s hands, this occurs after his girlfriend is also shot. And as is expected from this film’s cynicism, Harris is gunned down by police, and by a previously unknown officer at that.

Across 110th Street is almost devoid of positivity and aspirations of hope. It will not make you feel good about policing, race, relationships, or upward mobility. But it is an important representation of a segment of experience characterized by the lack of all these things. Additionally, the performances of Kotto and Quinn focus the film in a manner that does not inspire a sense of falseness, and reminds us of how far we have to go.