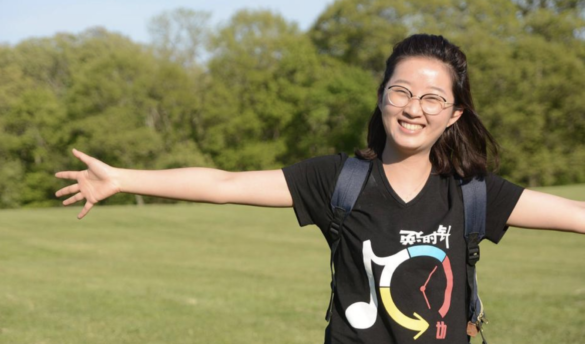 On June 9, 2017, Zhang Yingying, a visiting Chinese scholar at the University of Illinois at Urbana-Champaign, went missing near campus and was never found since then. Finding Yingying – director Jiayan “Jenny” Shi’s debut documentary feature and a major award winner at this year’s SXSW – records the two-year-long trials and tribulations Yingying’s family and loved ones go through, as they struggle to find a definitive answer for what happened to her.

Every year, more than 300,000 Chinese international students and scholars come to study and research in the U.S.. Unfortunately, Yingying was the one among them who ended up bearing a fatal consequence of seeking higher education in this country. Starting this week, CineCina – a New-York-based Chinese film organization composed of aspiring Chinese students and scholars like Yingying – is screening this intimately moving film tribute to her celebrated life on its virtual cinema.

Since Yingying’s case became a high-profile story in both Chinese and U.S. media, it has received widespread attention from the two countries’ general public, and the Chinese students who volunteer around UIUC to advocate the search and justice for her. Director Shi is the one among them to start documenting the traumatic experiences of Yingying’s family, boyfriend and colleagues – as they witness the federal investigations into an American man who turns out to have already kidnapped, raped and murdered her; Shi’s firsthand footages also candidly display their heartbreaking cries of despair – as they await his conviction and sentencing throughout the U.S.’s prolonged legal and judicial proceedings which feel too foreign and unbearable to their grieving hearts.

Shi adeptly pieces together these raw, emotional materials with a variety of footages from interviews, security cameras, and local and national news to structure this well-rounded, multi-faceted true crime documentary – which effectively familiarizes the audiences with Yingying’s case. However, the core of Shi’s directorial agency resides in her subversion of this documentary genre – by foregrounding Yingying’s lived life, and imagining an alternate reality of her unlived future.

Shi’s genre subversion – by weighing Yingying’s life story more than the criminal case itself – derives from her empathy and respect for Yingying whom she personally relates to, as they share very similar identity and education backgrounds. As a young Chinese woman studying in the U.S., Shi personally understands Yingying’s omnipresent sense of loneliness and insecurity as an alien in this country, which might have contributed to her naïve unsuspicion of her murderer.

Integrating the participatory and observational modes of the documentary genre, Shi applies her own voiceover narrations of Yingying’s diary entries to anchor the film, while superimposing the visuals of Yingying’s diary writings that fade in and out of the frame – precisely along with the film’s changing rhythms of editing. These affective audiovisuals elevate Shi’s filmmaking by illustrating a lively picture of Yingying as a real person in the flesh, rather than an anonymous victim of a sensationalized killer. “Life is too short to be ordinary.” Shi highlights this sentence Yingying wrote down in one of her diary entries – in remembering this extraordinary individual as an ambitious scientist; a talented singer; a sweet girlfriend; a devoted daughter.

As China-US relations are growing tumultuous, Finding Yingying is also an authentic lens into the diaspora community of international Chinese students and scholars, who are now caught between the two countries’ Covid-19 and diplomatic crises. Many of them, like Yingying, come from humble backgrounds in pursuit of meaningful education and careers that they believe the U.S. could offer. In this regard, the film is a cautionary tale for both countries to allocate more resources for ensuring this community’s welfare and safety in prevention of similar tragedies from happening again.