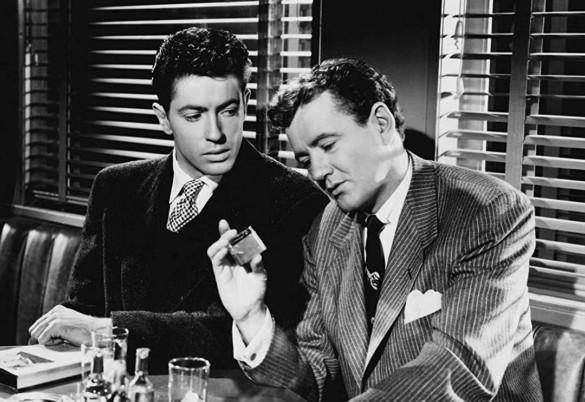 As a self-proclaimed Hitchcock fanatic, I realize there are many films in his filmography I have yet to explore. Hitchcock is my favorite director. One of my favorite things to do is find his continued influence on current directors and films being released in today’s world. This is my journey on becoming a more well-rounded, educated Hitchcock fan.

I have been known for my entire life as someone who “knows no strangers, just friends I haven’t met yet” so I can completely relate to the basis of this narrative. I talk to people in grocery stores, on planes, at the gas station, you name it! I even once went on a date with a guy I met at jury duty. But maybe Hitchcock’s Strangers on a Train (1951) will make me reconsider my willingness to be friendly to strangers.

I love Hitchcock’s approach to his narratives. Rather than a “whodunit” type of mystery and thrill, his approach is instead: here is everything you need to know, now sweat while you wait to see what happens. That is exactly what happens to the protagonist, tennis star Guy Haines (Farley Granger) meets Bruno Antony (Robert Walker) on a train after their feet touch accidentally. Then, Bruno realizes he knows this man. Bruno immediately infiltrates Guy’s space, moving closer and asking intrusive questions and creating an uncomfortable conversation. Wouldn’t it be ideal to have two strangers commit a perfect murder? Here is Bruno’s scheme: Bruno kills someone for Guy, and Guy does the same for Bruno. Guy just wants to divorce his unfaithful wife, pregnant with another man’s baby–not to murder her. He wants to cut ties and move on with his life, marrying the woman he is now in love with, Anne, the daughter of a US Senator. Bruno thinks this a foolproof plan: the two have no known connection, so the murders would be random, completed by a stranger of the victim. It is apparent that Guy just wants Bruno to leave him alone, and not taking him seriously, laughs along with the idea of the plan. Strangers on a Train is truly Hitchcockian. By that I mean, we know what happens, who killed who, but we are forced to endure the suspense of what the consequences will be. Who will get the blame? Will the correct murderer be found out, or will he get away with it?

Hitchcock takes full advantage of the camera and accentuates the targeted visuals, perfectly weaving them into the story. He does this in a way that makes the visual important, though the audience doesn’t know necessarily why, yet. I adored how Hitchcock introduces us to the characters through their feet and shoes, essentially what brings them physically to the train. This also ends up being how they meet, when their feet “bump” into each other. The shoes, of course, will later come into play when Bruno attempts to use them as a weapon. But the shoes tell us much more about the characters other than just serving as the avenue for how they meet. Guy’s shoes are one color, solid and plain. He is who he is, simple, and what you see is what you get. Bruno’s shoes, in contrast, are fancy and two colors, which represent his two-sided personality. His shoes are light and dark, which serve as his normal side and dark side of who he is as a person: the person he shows people and the psychopathic murderer he keeps hidden.

I cannot help but remember the use of shoes throughout JoJo Rabbit (2019). Director Taika Waititi perfectly weaves in the visual of Rosie’s (Scarlett Johansson) shoes, and then uses them for full shock value and messaging as a turning point in the film. I would love to think that all talented directors working today were somehow influenced by Hitchcock, and I might be stretching to make this comparison, but it makes sense in my head–so i’m going to stick with it. Either way, whether you see the comparison or not, both directors use the camera and what takes up the screen, something tied directly to a character, to relay the message you need to understand the story. Rosie’s shoes are also two colors; not representing good and evil in the way that Bruno’s do, but representing her double-life. The life she shows her child and the life she keeps hidden away from him.

To bring it back to Hitchcock, though, and Strangers on a Train, Guy continues to play the cat and mouse game with Bruno and the police trying his best to not be blamed for his wife’s murder that Bruno executed solely on his own merit. Good eventually prevails over evil, and Hitchcock has his snarky way of ending the film exactly where he started it. However, this time, Guy is accompanied by his love Anne, and when a stranger attempts to strike up a conversation, they get up and leave. The punch-line Hitchcock serves is clear: don’t talk to strangers.