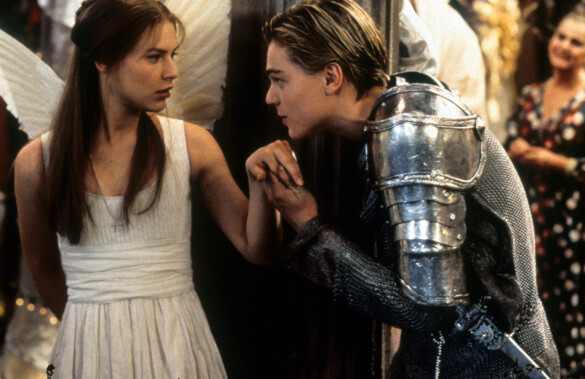 The year is 1996 and in the oh-so-hip time of “I want my MTV,” bands like Nirvana, Radiohead, and The Smashing Pumpkins flowed through airwaves of the alternative music scene, giving angsty teens something to identify within the lyrics. And through that mix of teenage wasteland, director Baz Luhrmann, coming off his first directorial debut, Strictly Ballroom, is set to release his newest film, an adaptation of one of the most famous plays to ever exist: Romeo + Juliet.

William Shakespeare’s tragedy about two star-crossed lovers has been adapted so many times that I’m sure we’ve all lost count at this point. Most of us read the story at a time during our teenage years, and anyone else who wasn’t offered that opportunity, at least knows the story. Two young people, Romeo and Juliet, wear their hearts on their sleeves and fall head over heels in love. However, their families, The Montagues, and The Capulets, feud within the streets of Verona. Even vicious hate will not drive these young lovers apart. Whether it’s a pure period drama like Franco Zeffirelli’s 1968 version or a loosely based contemporary take like 1961’s West Side Story, they’re all basically the same narrative. But where does Luhrmann’s version rank in the plethora of adaptations?

Luhrmann adapts this in the most “Luhrmann” type of way. He sets the tale in Mexico—a scorching atmosphere of heat and sweat surrounded by deeply religious imagery. The men drive colorful low riders, wear grills on their teeth, and guns now replace swords. Luhrmann always goes full outrageous when it comes to his films—nothing short of fever dreams, in my opinion. From the very beginning of Romeo + Juliet, it’s all fast edits and loud music. The vibrant aesthetic for which we have been exposed to is only the tip of the iceberg. The story is rather different, though encapsulating the basics of Shakespeare’s verse. While the play, and other period adaptations like Zeffirelli’s, focus on the romanticism of the couple, modern versions such as West Side Story or Romeo + Juliet put the fighting between The Montagues and The Capulets at the forefront. It’s easier sometimes for audiences to accept such heavy bouts of romance in period pieces. The romance can often get too cheesy when displayed in modern films. Nevertheless, Luhrmann combines the old English of Shakespeare’s time with the bright visuals of today’s culture.

I believe that Luhrmann doesn’t get enough praise for his direction here, because his overall outlandish tone overshadows some of the great things he’s able to do. The movie begins with a single television as an anchorwoman now reads the prologue of the play. At the time we had just come off the heels of the O.J. Simpson trial—a media frenzy like no other. As we see during the first fray, the violence between The Montagues and The Capulets (now rival companies) are splashed upon the screen like entertainment. A cultural shift that we can still sadly identify with. In addition to the news angle is Luhrmann’s brilliant symbolic use of both water and color (blue for The Capulets and yellow for The Montagues). He blends these colors when Romeo and Juliet are together, even creating an atmosphere of water around them when they are often alone. These details are so subtle that it can often go unnoticed, but when we finally take note, they can amplify our viewing experience.

Critics panned Romeo + Juliet upon its release, quaking in disgust at its “relevant” and “messy” retelling of the famous tale. One may find this version of “Romeo and Juliet” with, what I call, the overbearing MTV qualities booming in the background with every scene quite jarring, but rather it’s a making of its time period—a contemporary version made to fit a young generation. Many of the criticisms fell upon the lack of chemistry between Leonardo DiCaprio and Claire Danes. Although recognizable names now, both were still new in their careers with mostly television and only a handful of films at the time. The decision of keeping true to the original Shakespearean text also made some of the dialogue feel hollow in their proclamations. The actors were saying the words on the page, but did not accurately convey their meaning.

I know. I get it. It’s flawed. However, even with those flaws, I find Romeo + Juliet to be entertaining in a refreshing way, as it continues to grow in its cult following. Cinephiles can try to pull anyone towards a different version pointing and exclaiming “this is the better,” but is it necessarily better? The longevity that Romeo + Juliet creates here with its nods to pop culture, is a gateway for people to better relate to the story. Thus, further possibly creating an easier grasp to explore other Shakespearean plays. In my opinion, “Macbeth” is better.

I was only a child when Romeo + Juliet was released in theaters, so I couldn’t make a well-thought-out critique of the wrongs and rights of the film. Nevertheless, it’s always stayed with me. Maybe it’s the nostalgia kicking in as I had a sibling with the Romeo + Juliet soundtrack, (The Cardigan’s “Lovefool” pumping through the speakers) but I’ve always found this film enjoyable. I also find Zeffirelli’s version and West Side Story great, too. I’m not going to discount Romeo + Juliet because it’s more “over the top” than the others. Much like the music that’s used throughout the film, Romeo + Juliet is just a decent cover of a great original.