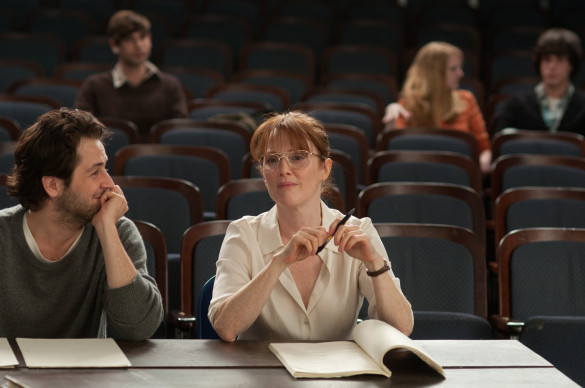 Synopsis: An English teacher’s life is disrupted when a former student returns to her small town after failing as a playwright in New York.

DIRECTION
Craig Zisk’s direction starts off strong with a fun voice-over narration that acts as the thoughts of Julianne Moore’s over-literatured, romance-opposing character. You start to feel who her character is and what type of setting you’re about to get into and where you’re about to go. Zisk get’s a descent script but the movie starts to fizzle out toward the last act of the film. His camera movements are very straight forward but adds a nice element of words on the screen as the film is through the perspective of Moore’s character. The music isn’t exciting but the score does fit the tone of the film. Overall Zisk, whose known for TV, can’t escape that fact as it has a TV drama feel to it, but he gets away with it on the merit of the performances.

SCRIPT
The script, as the with the direction, starts off strong as you get to know Moore’s character well and you should as the story is from her point of view. Her character isn’t anything new and is stereotypical as the English/Literature teacher that is all lovey-dovey on the inside but lacks any real romantic relationship on the outside. Her lover is literature and the characters that come along with it. When she comes across a play script from an old student, you see her an emotional wreck that immediately draws her attention and gives it to the school drama teacher. The two begin to do it as a school play and the layers start to develop and unravel when you find out the play is all about. It’s also during that time that the film starts to unravel and take it’s spiral down into some awkward and in some cases immorally-wrong territories. The (movie) script’s tone changes half-way through but comes around at the end with some great themes that I enjoyed, such as forgiveness and humility. The relationship Moore has with Greg Kinnear’s character is broken and in some cases unnecessary. Overall, the script has some creativeness to it, but it’s nothing we haven’t seen before.

PERFORMANCES
Moore does an amazing job with a character that is mostly stereotypical but she makes some choices that is almost unreal. Her character is so naive and childish at times that she can’t tell the difference between reality and her literature. Jealousy forms and bad decision making becomes her clutch and Moore pulls it off tremendously. Nathan Lane, who plays the drama teacher is amazing as the drama teacher who couldn’t quite make it on Broadway. Michael Angarano and Kinnear play a father and son combo, which is interesting because they hardly share any screen time leaving that relationship emotionally void, which may be the point. I thought they played the characters well though, especially Kinnear as the father who’s relationship with Moore’s character is full of all kinds of madness and stress. I thought Kinnear did a great job though as the doctor who is forced to stand up for himself against a character that is…well…kind of crazy.

SCORE
The score by Rob Simonsen isn’t one that you’ll want to listen to a lot outside of the film, but it’s fitting and definitely has it’s moments. It’s got a fun, light theme that adds to the film, especially during the narrative pieces. It’s strong it the dramatic elements but mostly in the background where it needs to be.