Movie Review: Side Effects has many good ones 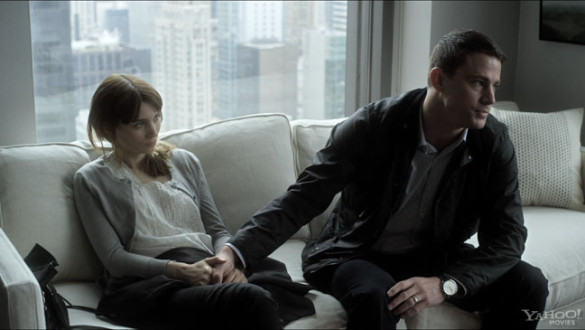 Synopsis: A young woman’s world unravels when a drug prescribed by her psychiatrist has unexpected side effects.

DIRECTION
Steven Soderbergh has some great films and if this is his last movie as he claims it is, it’s a good one to go out on. The movie has a strong script behind it, but Soderbergh does a great job of capturing the essence of the story. The movie is set to be all about Rooney Mara’s character in the beginning, but then takes a sudden turn. And because of the turn in the script, the film almost feels like two movies in one film. Soderbergh does a great job though of taking the story and creating excitement and drama of the story and making it feel like it all fits and it’s appropriate. The biggest issue I have is the use of Channing Tatum’s character. He’s under-utilized and doesn’t add much to the story. It’s probably more of a casting issue, but having Tatum in the role doesn’t make sense. Overall though, he got great performances out of the actors, the score was great and all the sets were perfect. And because this is a story driven movie and Soderbergh nails it, it’s a high grade for me even if those other elements were great.

SCRIPT
With only 7 finished writing credits to his name, you almost aren’t sure how good Scott Z. Burns is as a writer. But with films like The Bourne Ultimatum, The Informant!, and Contagion on your resume, it’s hard to say he’s not a good writer. And you can add Side Effects to that list of good movies as well. This is really well written and is a strong script for Soderbergh. I love the plot twists and how he is able to essentially take the story, turn it around and make it all about something else while being appropriate. The dialogue is great, especially for Jude Law’s character and the ending is spot on. The material may not be 100% original, but it’s the way he takes the material and the story and builds the elements on top of each other.

PERFORMANCES
Mara and Law are terrific in this film. Mara does a great job of drawing you into the character and making you feel her pain, while at the same time, you’re trying to understand her and what is going on with the story. Tatum, who plays her husband, is good, but there is one problem. He has that G.I. Joe: Retaliation thing going where he’s great, but hardly in the film. He’s mostly a name they can use the market the film, but the character is so irrelevant to the story that Tatum’s performance is easily forgettable. Catherine Zeta Jones is also good in the film, but like Tatum is a side character that actually has value, but it’s limited as well. But since we’re talking about the performances, they are good and achieve what they needed to do. Law is the driving force of this movie though and he carries it well. The movie takes a sudden turn as I’ve mentioned, and Law now becomes a character fighting for something, where in the first half of the film he’s investigating. He’s remarkable in the role though and makes this movie for me.

SCORE
Thomas Newman’s score for this film is very appropriate and was good. It wasn’t an outstanding score and it was mostly in the background, which is why I liked it. This movie didn’t need a big, thematic score, but enough to add drama and be in the background for support. And that is exactly Newman does here. So while it may not be a score you go out and purchase, it’s good for what it’s doing and is very appropriate.