Review: ‘La Traviata, My Brothers & I’ Is a Warm Coming-of-Age About Brotherhood and the Power of Art 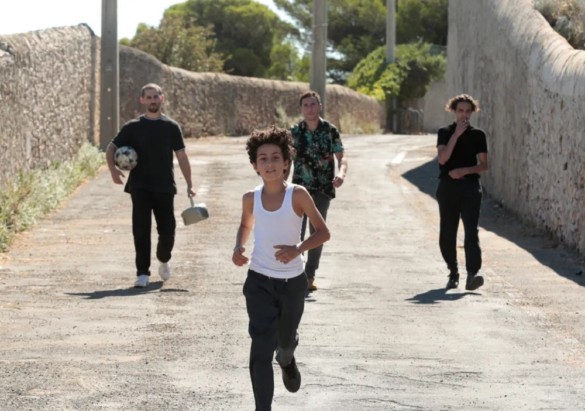 Nour, a 14-year-old boy, is enjoying the beginning of the summer holidays in the South of France. He is the youngest of four brothers. They live together in a council estate, taking turns caring for their mother who is in a coma. She used to love Italian Opera, so Nour plays it for her, and develops a passion for that music.

14-year-old Nour (Maël Rouin Berrandou) stops midway through his community service to listen to the voice of Luciano Pavarotti coming from a nearby classroom. He peeks through the window, hungry to listen more. Opera is his music; the music that his comatose mother loves, the music that was used by his now-deceased Italian father to conquer his mother. But the magic moment suddenly stops as Nour is violently yanked away from the window by his angry boss. What was he doing? There’s no time for music when you are poor. There’s no time for culture when you are the youngest of four brothers struggling to make ends meet. Right? An artist rushes out of the classroom to disagree. She will try to save Nour through art.

Premiering in the Un Certain Regard section of Cannes 2021, Yohan Manca’s La Traviata, My Brothers & I takes a story that we’ve seen before – about art rescuing people,- and gives it a big coat of sincerity to transform it into a charming and realistic coming-of-age.

Nour lives in the suburbs with his brothers Abel (Dali Benssalah), Hedi (Moncef Farfar), and Mo (Sofian Khammes), each working very different jobs to sustain themselves and their mother, who is perpetually in a bed in their apartment. When Nour is invited to learn to sing by the kind-hearted teacher Sandra (Judith Chemla), he finds a purpose and a way to escape his reality. However, Nour doesn’t fully believe in his talents and needs as much motivation as possible to keep going, something that comes from Sandra and his fellow singing classmates, but not from his surroundings.

Despite having many familiar ideas, Manca constantly steers away (and sometimes barely escapes) from completely falling into clichés and melodrama. He achieves this thanks to layered and very real characters that struggle with their state in the world. Nour has talent as an opera singer, but he isn’t Bocelli from the get to. He has other worries and obstacles that constantly drag him down.

Manca creates complex brotherly relationships that add texture to the plot. There’s a lot of testosterone and tough love going on (especially from Abel), and none of the brothers seem very interested in supporting or even paying attention to Nour’s dreams; they have far more important things to worry about. They brush him aside and dismiss his singing as useless. Abel, who desperately tries to feel the role of father, scolds him and instructs him to find work instead. Their collective attitude becomes a source of frustration throughout the film; you have this struggling underdog fighting to develop his talents, but the people around him are bigger obstacles than pillars for him. However, there’s genuine sensitivity and love between all of them; you just can feel that any of the three would gladly stop in front of a train to save Nour. It’s just that the environment around them has taught them to not have dreams. And deep down, Nour shares these thoughts too, but thankfully he has Sandra to remind him that talent can push you through hard times.

Despite the setting, Manca doesn’t let misery come close to overpowering the plot; there’s always sweetness, kindness, and humor. Instead of portraying the working-class neighborhood as hostile and cold, the cinematography is warm and hopeful. There’s life in the wall stuffed with photos of football players, in the untidy beds, and in the simplicity of enjoying a watermelon next to the beach.

The performances are convincing every step of the way. Maël Rouin Berrandou’s confident performance oozes authenticity and charisma, and Chelma’s sweetness shines through as a beacon of hope. All brothers are tremendous, but Sofian Khammes becomes the highlights thanks to his swagger and sensibility; a scene involving him flirting with a tourist is pure delicious cringe.

The third act stumbles due to predictable developments and messy editing. The film’s ending isn’t exactly satisfying because you are left with hunger to know more about the lives of these four brothers. Manca’s emphatic directing succeeds in emotionally immersing you into a convoluted, yet very truthful world.

La Traviata, My Brothers & I doesn’t get all the way over the finish line, but it has one hell of a run trying to. It’s a grounded coming-of-age that doesn’t even need to reveal what specific part of France it’s set in because its message of art and brotherhood is universal.

La Traviata, My Brothers & I (Mes Frères et Moi) was screened as part of the Un Certain Regard competition at Cannes 2021.