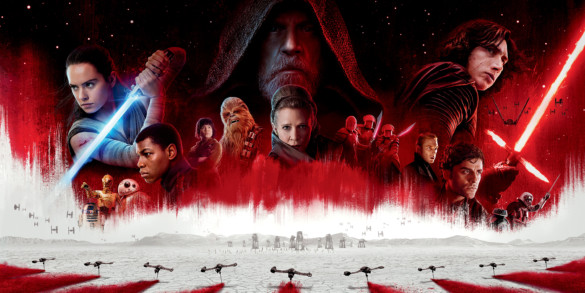 It’s officially December, the end of the year. Do you know what that means? Actually, I don’t blame you for not knowing. For cinephiles, the answer to that question used to be an easy one; “It’s awards season,” we would say, as we attempt to contain our excitement and celebrate our favorite films of the year (a great feeling for us movie lovers). And not just Oscar season, but we go gaga for nominations for the Critic’s Choice Awards, New York Film Critics, Los Angeles Film Critics, Screen Actors Guild, Golden Globes, among others.

But now, the answer to my initial question isn’t so simple, and we will generally reply with one of two possible answers; “It’s awards season!” or “STAR WARS!” Thank you Disney, for continuing to make us feel like nerdy kids all over again (that was sarcastic, yet not at all sarcastic). May the forceful end-of-the-year celebration be with you, if you can escape from that galaxy far, far away, because I’m here to tell you what other great films to look out for this month.

But just in case you plan on seeing other wide releases this month, (after you see The Last Jedi at least four times), look out for some potential Oscar contenders. Already reviewed here on the InSession Film podcast is the latest from Guillermo del Toro (Pan’s Labyrinth, Pacific Rim, The Devil’s Backbone, Hellboy, among others) in The Shape of Water, a gorgeous vision of outcast romanticism and fantasy, which you genuinely need to see; bolstering a frontrunner in lead actress with Sally Hawkins, with a cast that also includes Michael Shannon, Richard Jenkins, Michael Stuhlbarg, and Octavia Spencer, just go see it. And if The Shape of Water holds a major competitor for Best Actress, The Disaster Artist may do the same in Best Actor with James Franco; as director and star, Franco’s The Disaster Artist looks into the making of the notoriously awful The Room, from our generation’s most prominent man of mystery Tommy Wiseau. Or if you’re curious about something more controversial, we are all curious to see if Ridley Scott can pull off the impossible with All the Money in the World, starring Mark Wahlberg, Michelle Williams, and NOT Kevin Spacey; there was the letting go of Spacey after such horrid comments and accusations, replacing him with Christopher Plummer, and STILL making its December release date, what could go wrong?

Awards season may be easy for us cinephiles, but for general moviegoers, who don’t live in better markets (i.e. the city), some of the year’s best films will be harder to come by. Curse you limited releases. But, when you do get the chance, and when they do go wide, look out for the latest from Steven Spielberg in The Post; the true story of the country’s first female newspaper publisher and the Pentagon papers, and starring Tom Hanks and Meryl Streep (among many other great character actors), The Post has already won Best Picture at the National Board of Review, and is a shoe-in for major awards contention. Meryl Streep could be gunning for her fourth Oscar, but if Sally Hawkins is among the competition, so is Margot Robbie in I, Tonya, yet another true story about controversial figure-skater Tonya Harding; already covered on the InSession Film podcast, I, Tonya is a fresh and energetic biopic that should be seen, and Robbie is indeed great. Jessica Chastain could also hit hard with Aaron Sorkin’s directorial debut Molly’s Game (another true story), and despite the film’s mixed response, In the Fade could see some steam for Diane Kruger.

And if that wasn’t enough for us cinephiles, Paul Thomas Anderson has a new film coming out, and it stars Daniel Day-Lewis in what may be his final outing as an actor (cue the simultaneous tears of joy and sadness); focusing on a high society dressmaker, Phantom Thread has been described as a strangely comedic and romantic period piece, and is further proof that Anderson only continues to challenge himself first. There’s also the latest from Michael Haneke in Happy End (from Cannes earlier this year), Scott Cooper with Christian Bale in Hostiles, and Aki Kaurismäki in The Other Side of Hope.

Perhaps you couldn’t care less about awards season, and maybe just want a good time this holiday season (it’s called holiday “cheer” after all). And maybe you want to bring the whole family, and laugh at the sheer lunacy of Jumanji: Welcome to the Jungle; while I still think this film was only made to add that classic Guns N’ Roses song to BOTH trailers, I can’t deny that I laughed, and I enjoy seeing Dwayne Johnson and Kevin Hart onscreen together (Central Intelligence was funny, don’t judge). There’s also Pitch Perfect 3, featuring the most attractive group of females to ever do A Cappella; I did A Cappella in college, so I liked the first two flicks, they have great female camaraderie.

Or maybe you want something that will “bridge the gap” for you, so to speak; something fun and potentially fluffy, but just barely crosses that line into self-seriousness. Attempting to ride off the coattails of La La Land, Hugh Jackman stars as P.T. Barnum in The Greatest Showman, a new original musical; I’m still on the fence for this one, but this is show business after all (yes, that was a pun). There’s also the latest from Alexander Payne (Election, Sideways, Nebraska, among others) in Downsizing, a quirky sci-fi comedy about shrinking (yup, really); already seeing a mixed response, perhaps there’s still joy to be had. And if you still love to get your Woody Allen kick, his latest Wonder Wheel (seriously, another “Wonder” movie?) comes out in limited this month, and while the early response hasn’t the most favorable, surely the cast (Kate Winslet and Justin Timberlake) will make up for it, right?

I’m sure I had you at Star Wars, we’re all excited for it, but I urge you all to consider everything else among the stars this month. With directors like Spielberg, del Toro, and P.T. Anderson still releasing films these days (let alone in a single month), you should be very excited. I guess I should include Rian Johnson (Brick and Looper) within that clique as well, he also has a film coming out this month…

Summary of films to look out for this month: All the Money in the World, The Disaster Artist, Downsizing, The Greatest Showman, Happy End, Hostiles, I Tonya, In the Fade, Jumanji: Welcome to the Jungle, Molly’s Game, The Other Side of Hope, Phantom Thread, Pitch Perfect 3, The Post, The Shape of Water, Star Wars: The Last Jedi, Wonder Wheel

The Academy Awards of 2009 was the last year in which there were only five nominees for Best... Read More »

Okay, okay. So we all know what’s going to be the de facto Gerard Butler film. However,... Read More »