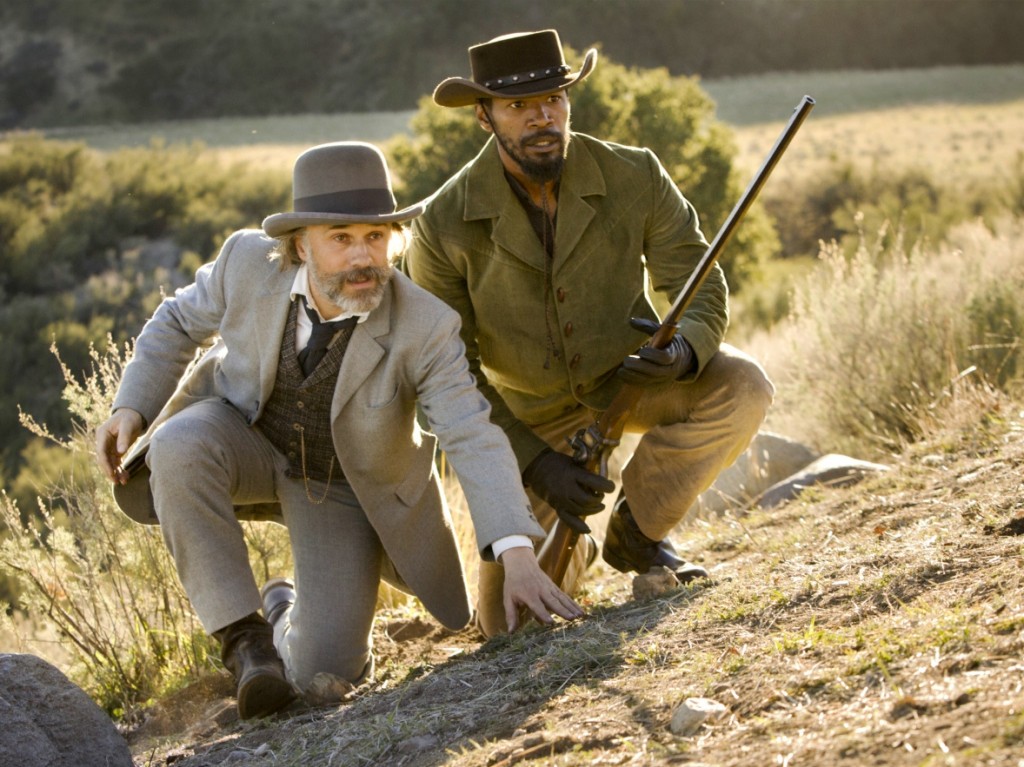 Synopsis: In antebellum America, Djano, a slave, is separated from his wife. With the help of a bounty hunter, Django is freed and sets out to reclaim his wife from the plantation owner who holds her captive.

DIRECTION
Django Unchained is a tightly planned and executed film. With a runtime of nearly three hours, Django never feels boring or unnecessarily lengthy. Tarantino knows his story is epic and the time he takes to tell his story reflects that, yet he also keeps his audience entertained. Django Unchained walks a beautiful line between farce and tragedy. In Django, I laugh at the macabre, overly gruesome murders of characters, yet almost weep when others characters are killed. Most films that attempt to tackle both these emotions end up as bipolar flicks  like Hancock and Click which leave me not knowing what I feel and craving therapy more than continued movie watching. It’s been a while since I laughed and gasped at the same time as much as I did while watching  Django Unchained. Additionally, Tarantino knows how to pay homage to his muses. Tarantino’s visual style especially in action, mirrors spaghetti & American westerns. In fact, the climactic shootout sequence almost directly parallels the shootout at the end of Sam Peckinpah’s The Wild Bunch. With the excessive flying blood, the dramatic use of slow motion, and the perfectly timed underscoring, the scene is transcendent and will stand as one of the greats in action movie history. Django Unchained is an excellent film, but not Tarantino’s best. Reservoir Dogs and Inglorious Basterds still reign supreme as their stories are tighter, but Django Unchained is certainly a Tarantino masterpiece.

SCRIPT
Tarantino and the written word are an inseparable couple. Anything he pens not only tells an epic story, but creates a world that cannot be categorized by any one word except Tarantino. Django Unchained‘s story is without measure. Its storyline is epic and unlike any other film before. A slave and a bounty hunter teaming up together to rescue the slave’s wife, would in another writer’s hands become exploitation or schlock. But with Tarantino at the helm, a story worthy of Best Original Screenplay is crafted. The script’s only downfall is the Leonardo DiCaprio’s character is painted. He is an excellent villan, yet I still had trouble buying him as a villan. The fault does not lie in DiCaprio’s performance, but in Tarantino’s script. His character’s villainy does not make complete sense. If he had a backstory, I would have understood him more, but otherwise he was just evil for evil’s sake (which may have been Tarantino’s purpose all along; if so, I rescind). Except for this one minor flaw, the script ranks among Tarantino’s finest.

PERFORMANCES
Jamie Foxx is the baddest of assess. Foxx owns the role of Django, first as a reserved, downtrodden slave and ultimately as a warrior who fights for himself, his love, and his brothers. Christoph Waltz shines as always but this time in his brightest light yet. Waltz proves he is no longer pigeonholed as a deliciously evil villain, but instead creates a supporting protagonist who is not only admirable but endearing. Django also includes turns from Leonardo DiCaprio and Samuel L. Jackson who play the film’s lead antagonists. I did not believe it was possible to hate Jackson, but when he plays a character as foul and black-hearted as Stephen, a once beloved American treasure easily slips into the role of public enemy number one; in short, Sam Jackson’s performance is one for the ages. DiCaprio also plays bad well but to a lesser degree. There is still too much sympathy in his character, but the fault lies not in his performance but in Tarantino’s script (see above). Other cast members, including cameos by Jonah Hill, Don Johnson, and Tarantino himself, add to the ensemble and make the casting spot on.

SCORE
Like some other Tarantino films, Django has no original score, but instead a soundtrack. And, man, what a soundtrack at that. Throughout his film career, Tarantino has had not only a great eye, but an ear that makes his movies that make them distinct and allow them to transcend the normal bubble they might have lived in otherwise. The music on the surface doesn’t make sense (hip-hop in 1850?), but the heart and humor in the film come even more alive with these musical selections. The soundtrack includes spaghetti western showdown music a la Ennio Morricone and Jerry Goldsmith as well as rap music by RZA and Rick Ross. Nothing in the soundtrack meshes, which is likely Tarantino’s purpose; however, due to this in-cohesiveness, there is little to bind the film together as a whole. The film does not suffer for it, but it not as memorable as films with tight themes and leitmotifs.