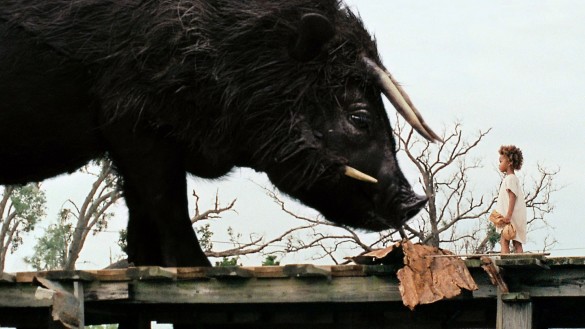 Synopsis: In a semi-post-apocalyptic world, where parts of the world have been flooded, Hushpuppy and her daddy live in an flooded area called the Bathtub. With her father’s ailing health and the world literally falling apart around her, Hushpuppy must learn how to be courageous and loving in the face of fear and hatred.

DIRECTION
Benh Zeitlin has proved out of the gate that he is a phenomenal director. Beasts is his first full-length feature and it already stands a film worthy of praise. Zeitlin tells his story so beautifully with soft camera work. The “beasts” in the film are magnificent and startling without being cheesy or overly terrifying. They appear as if maybe they could be real, similar to the feel of the film as a whole. The film leaves and impression on the the viewer. As I leave Beasts, I remember its last line, “Once there was a Hushpuppy, and she lived with her daddy in the Bathtub.” Yes, she did indeed.

SCRIPT
Beasts of the Southern Wild is not a script most studios would look at and give a green light to. Yet, Zeitlin & Alibar knew the gold in their hands. The story does not explicitly fall into one genre and yet ultimately it is a love story of a father and daughter. With its themes of love and courage, the story is highly accessible to audiences; however, it keeps a distinct feeling by creating its own world and never leaving it.

PERFORMANCES
The performances in Beasts of the Southern Wild drive the film, and it is without argument that with different actors, Beasts would be a different and lesser film. The film stars unknowns actors who after Beasts will no longer remain on unknown. Quverzhané Wallis carries the film as Hushpuppy. She transcends the bounds of child acting and plays a role not too old for her (Jodi Foster in Taxi Driver) or a role that is merely a kid being a kid (Abigail Breslin in Little Miss Sunshine). Wallis exudes more emotion and life in this role than Meryl Streep, quite a triumph for a nine-year old. Dwight Henry plays Wink with should visceral anger and buried tenderness that it does not feel like a performance but an actual father trying to provide the best for his daughter. The supporting cast all portray real life characters struggling to survive. The feel has almost a documentary feel because of their true to life performances.

SCORE
Dan Romer and Benh Zeiltin’s score for Beasts is my favorite score of the year! The score has a New Orleans Jazz/Bluegrass feel to it. It’s full of mystery and sympathy and adventure; the same aspects that make the film itself so spectacular. It is ridiculous that this score failed to receive a nomination for best score. The film’s main theme sweeping yet it does not overpower the story and characters on the screen; it only enhances them, serving the exact function of the underscoring. Romer and Zeitlin’s score is also an excellent composition apart from the film. I’ve been listening to it for a few weeks now and it only gets more satisfying with every playback.