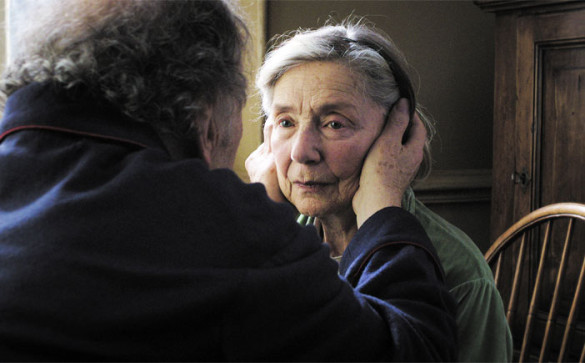 Synopsis: Georges and Anne are in their eighties. They are cultivated, retired music teachers. Their daughter, who is also a musician, lives abroad with her family. One day, Anne has an attack. The couple’s bond of love is severely tested.

DIRECTION
Michael Haneke brings us an amazing film filled with love and emotion, heartbreak and frustration, and of this year’s best films. Some of Haneke’s shots are interesting as they give you a perspective of what it’s like to really live the couple in this film. The camera would literally just sit there as the actors are performing the scene and moving around, giving you an incredible sense of realism. He got incredible performances out of the actors, the scenery was perfect, and you feel for the couple as they as they cling on to hope (or try to). My only knock on the direction is there is no score, so it’s incredibly quiet and unusual. As someone who thinks the score is a huge part of movies, I was disappointed and it was weird. Outside of that, Haneke did a great job.

SCRIPT
Hanake also wrote the script for Amour. I love the story here. The dialogue is pretty good and there are some scenes in this movie that left me really wanting to engage with the characters. The script is centered around a subject matter that would be hard to deal with and I can’t imagine the couple’s pain, but I love how they try to fight for it and cling onto whatever hope and love they have left.

PERFORMANCES
Jean-Louis Trintignant and Emmanuelle Riva are amazing in this film and really captured my heart. I love how they interact with each other and they had amazing chemistry. Trintignant was great and as a guy, I really felt for his character and what he was looking for. Riva deserves every bit of her Oscar nomination and she makes worth watching this movie, if for nothing else.

SCORE
Unfortunately, there is no score. It doesn’t ruin the movie by any means, but could of added some value.