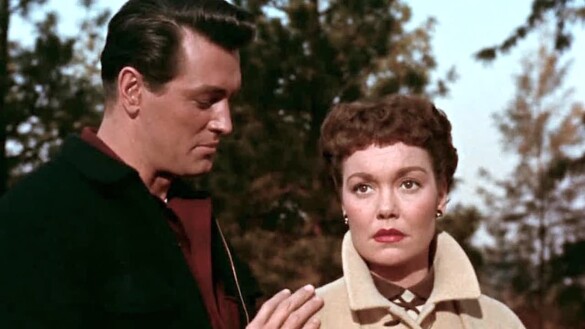 Many current filmmakers aim, and miss, for the past glory of the golden age of Hollywood, whether that be adapting the life stories of history’s biggest stars into standard biopics, trying to capture the complexities of the studio system, or using distinctly outdated aesthetics as a creative gimmick. The 1950s is a decade particularly difficult to nail down, marked by post-war ennui, the early days of the Civil Rights movement, and the gender binary as divided as ever. As a result, our filmmakers often portray this decade as one-dimensional, its inhabitants both suspiciously self-aware and oblivious to their current social situation. Todd Haynes, on the other hand, has time and time again presented us with mid-century stories that defy all expectations, paying tribute to the era of filmmaking while containing a strong air of verisimilitude. This is perhaps most evident in his 2002 film Far From Heaven, which owes its existence to the master of melodrama, Douglas Sirk.

Director Douglas Sirk made what we retroactively call “Woman’s Pictures”, that is, as it says on the tin, films made during the studio era directly appealing to female audiences and concerning the real-life social, political, and cultural struggles of women, often in an a domestic, urban environment (think Stella Dallas, Jezebel, Dark Victory, Mildred Pierce, Now, Voyager). Popular in the 1930s and 40s, Sirk brought these themes to the technicolor screens of the 1950s, with such titles as Magnificent Obsession, Imitation of Life, and All That Heaven Allows, the latter title being the primary inspiration for Hayne’s Far From Heaven. All That Heaven Allows stars woman’s picture-regular Jane Wyman as an upper-class middle-aged widower with two grown children whose relationship with the working class, young landscaper played by Rock Hudson stirs controversy in her WASPy stiff upper-lipped town in Connecticut. The film was remade in 1974 by fellow Sirk admirer Rainer Werner Fassbinder as Fear Eats the Soul, this time setting the story between a middle-aged German woman and an Algerian immigrant in Berlin. This version of the film features aspects that Sirk probably wished he could have included if not for the dreaded Hay’s Code, which included depictions sex and racial intermarriage. Borrowing aesthetics from Sirk, and themes from Fassbinder, Haynes presents a film that is decidedly American and perhaps the greatest tribute to a past director ever made.

From the start, Far From Heaven is striking in its visual appearance, so closely resembling 1950s small-town America with no hint of cynicism or artificiality. We soon meet Cathy, played by the timeless Julianne Moore, a seemingly perfect housewife of a successful businessman with two young children and a housekeeper played by Viola Davis in a pre-star role. Her perfect world is soon shattered when she discovers that her husband Frank, played by Dennis Quaid, is secretly gay and has been having multiple anonymous sexual encounters around town. At first, the couple are determined to stay together and seek psychological treatment for Frank’s “condition”, their marriage soon crumbles. In the meantime, Cathy begins confiding in Raymond, her gardener, played by Dennis Haysbert. Though innocent enough, Cathy’s gossiping neighbors soon show their disdain for her spending so much time with a Black man.

Haynes, like Sirk, presents us with a world illuminated by colorful lighting and rich jewel tones to cast this town almost like an American kingdom, one with established customs and rules that hold it together. The design of this world never goes past believability, but indicates a certain refined beauty that can only exist in a world that remains ignorant to its own ugliness. In one particularly evocative scene, Cathy’s lilac chiffon scarf gets caught by the wind and flies over her house, only to be retrieved by Raymond, her knight in shining flannel. This cliché would appear as tacky, and perhaps corny, if handled by any other director, but in the hands of Haynes, whose entire filmography has rejected cynicism in favor of sincerity, it is not a joke, parody, or pastiche; nor does it serve any purpose besides bringing two characters together in a moment of wistful beauty. Through such moments, Haynes makes the argument that beauty inherently justifies its existence.

That is not to say the film lacks self-awareness. The very placement of Moore as the idealistic, central figure in a story that deals with homophobia and racism is a clear indictment of our often misguided sympathies towards white women in moments of despair, and reflective of the sheer star power women held in the Golden Age of Hollywood, a stardom that was fading by the 1950s and is practically non-existent today. Cathy’s dilemma is not her personal struggle with the many forms of discrimination that plague American society, but her awaking to its existence, and the destruction of her perfect world so wonderfully maintained by her ignorance. While borrowing acting cues from stars of decades past, Moore’s performance never falters in its sincerity, setting the tone for the rest of the film.

The legacy of these aforementioned female stars continues to be perpetuated by queer communities, specifically gay men and drag queens house impersonation as a form of worship. It is easy to see why as a gay man, Haynes (and Fassbinder) saw a disguised form of representation in the films of Douglas Sirk. The casting of gay Hollywood legend Rock Hudson aside, Sirk’s technicolor worlds of glamour, poise, and refinement displayed a fantasy familiar to the common American, and especially to the closeted queer person of the 1950s. Most of Sirk’s films, however, reveal less ideal, oppressive aspects of American life, such as racism, classism, and thinly veiled internalized-homophobia. That hidden life is seen through the performance of Quaid, the classic straight man (pun intended) playing against type to great effect. As Frank, he is forced into underground bars, dark alleys, and an office after-hours for moments of personal connection. Raymond, similarly, is cast out of public spaces, such as a modern art gallery and local diner, especially when in the company of Cathy.

The endings of Sirk’s and Fassbinder’s films are complex but hopeful, allowing their audiences to envision a more tolerant future. By the end of Far From Heaven, Frank, in a manner uncharacteristic of queer characters, emerges hopeful. Raymond, a realist, packs up and leaves town with his young daughter. Cathy is left behind, her pristine reputation tarnished and her own vision of heaven demolished. The heartbreak of this shattered illusion is made all the more effective given the completeness of the world that Haynes has presented. In the form of a tribute to a past master, Haynes puts an entire artistic industry and country under the microscope of reflection. A film so confident in its tone and purpose feels like a breath of fresh air, and Haynes has time-and-time again provided his audience with a fully realized cinematic vision.