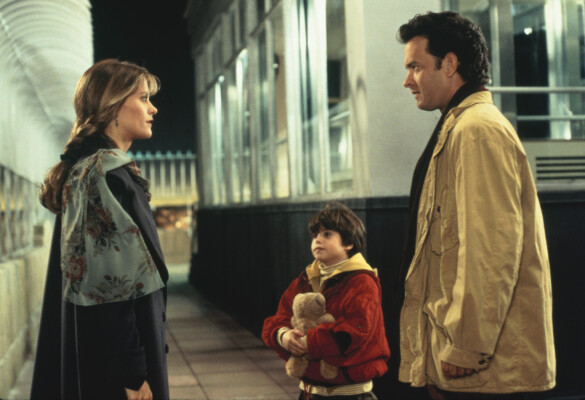 When Nora Ephron first broke through as a screenwriter of romantic comedies, she was treated like an ersatz Woody Allen. While this seems like a peculiar assessment when you consider Ephron’s filmography from a modern standpoint, critics in the 1980s and 1990s didn’t seem to grasp some of the subtle touches that she brought to her acclaimed screenplays. She and Allen came from very different backgrounds and while Allen was an unrepentant Ingmar Bergman fanboy, Ephron wasn’t afraid to show some love to classic Hollywood melodramas. Her career as the Queen of romantic comedies was years in the making and by the time she published the screenplay for When Harry Met Sally… (1989), she was already one of America’s most famous wits. This was the woman who wrote “A Few Words About Breasts” in 1972 and put together the screenplay for Silkwood (1983), a Meryl Streep vehicle about radiation poisoning. When she stepped into the role that she is now most famous for, it didn’t necessarily seem like a natural fit.

Ephron was seen as a scabrous, cynical writer during her time as a member of the New York intelligentsia, so her decision to write films about boys and girls falling in and out of love was disappointing to some. Her early efforts took on a light, humorous tone and typically ended on a positive note. There was little of the rage that seeped into Heartburn (1986) or the harsh self-deprecation that came through in her television interviews. It took some time for people to accept the idea that Ephron’s romantic comedies deserved to be taken seriously. It was with her second directorial effort, Sleepless in Seattle (1993), that she began to solidify her reputation as an auteur within the genre. She took inspiration from Leo McCarey’s Love Affair (1939) and its more famous remake, An Affair to Remember (1957), but put her own spin on a tale that was often criticized for being too sentimental and mushy. She blended droll observations on mundane aspects of everyday life with an intense belief in the almost mystical power of love. When the film became a box office smash success and permanently cemented Tom Hanks and Meg Ryan as America’s favorite on-screen couple, Ephron fully hit her stride and gained enough clout to command big budgets and a high degree of artistic freedom.

She co-wrote the screenplay with David S. Arch and Jeff Arch, and they managed to successfully streamline a story that could have become overly convoluted. The story opens with grieving architect Sam Baldwin (Tom Hanks) being reluctantly drawn into a discussion with a radio talk show host. Following his wife’s death, he and his son Jonah (Ross Malinger) relocated to Seattle from Chicago, but he still struggles to accept the loss of his one true love. He describes his romance with his wife to the talk show host and thousands of female listeners are deeply moved by his honest display of emotion. Journalist Annie Reed (Meg Ryan) feels as though she can relate to his feelings and impulsively writes a letter to him. She doesn’t mail it but her friend ends up sending it for her and Jonah is enchanted by the idea of Reed. Baldwin and Reed end up in relationships with other people but find themselves skirting around one another for several months and appear to have a spiritual bond that can overcome the obstacles that stand in their way.

It is impossible to imagine this film working without the powerful chemistry between Hanks and Ryan. When they see one another for a just moment, you need to be knocked over by the strength and force of their shared emotional bond. If Ryan and Hanks didn’t invest their characters with a painful level of sincerity, this scene would be laughably stupid and the film’s delicate center would break into a million little pieces. Rather than leaving you questioning why two people who have barely communicated are passionately in love, they use this moment to sell you on the idea that these people have to be together. From that point on, the suspense becomes almost unbearable and Ryan and Hanks have us weeping into our tissues. They know how to play our emotions like a fiddle and you find yourself thanking them for it. Emotional manipulation is a talent and, like the best con-men, Ryan and Hanks never let you in on the fact that it’s all an act.

The producers also went to the effort of plunging real money into this film and hiring the best of the best to handle the technical aspects of the production. The vaunted cinematographer Sven Nykvist brought his trademark tastefulness and simplicity to every shot. Nykvist doesn’t do anything flashy but he doesn’t have to. His guiding hand ensures that the film looks more carefully planned out than 90% of major romantic comedies. It takes you back to the 1940s, when respectable editors, cinematographers, and composers were regularly contracted to work on one of Preston Sturges’s madcap farces. Sleepless in Seattle looks polished and sleek in a way that He’s All That (2021) doesn’t. Highly accomplished industry professionals shouldn’t have to be ashamed of working on romantic comedies. If producers regularly forked out the money to hire the Sven Nykvists of the 2020s, romantic comedies wouldn’t look so worryingly bland.

There is also the issue of nobody really being able to step up to the plate and fill the gaping hole that Ephron left after her untimely passing. Some have tried to controversially argue that Nancy Meyers is the successor to Ephron but I think it’s ludicrous to imply that Meyers is even in the same league as Ephron. She carved out her own little niche in Hollywood and critics came to understand that every writer who tells stories about nebbishy New Yorkers with complicated love lives isn’t just ripping off the Woody Allen formula. Ephron’s unique voice had a real influence on other writers and it is a sign of her genius that others have failed to successfully conjure up the spontaneous joyfulness that could be found in so much of her writing.

Ephron is one of those writer-directors who worked on multiple entries on the list and I can happily say that the admiration for her work is completely justified. Sleepless in Seattle fully embraces romantic melodrama and Ephron cleverly exploits the insane chemistry that Hanks and Ryan share. Its greatness is undisputed and the list just wouldn’t be complete without it.